There's nothing quite like an airshow to get the adrenaline going and to experience the forces needed to get man airborne!.....and the Blue Angels certainly exemplify the awesome talent needed to manoeuvre at close quarters holding tight formations while puling terrific G-forces at high speeds!

November 11 and 12 was the Blue Angels homecoming and their last show of the season. This was held at NAS Pensacola , just a short distance from Ft. Mcree, one of our favorite anchorages in the Pensacola Bay area.  So this served as the perfect vantage point to watch both the Friday night show and the Saturday day show. and what better way to watch it than from the water!

Of course, many other boaters had the same idea, and with "raft-ups" from Pensacola Yacht Club (PYC), Point Yacht Club (Pt.YC), and several other ad-hoc groups, the anchorage became quite crowded requiring an early arrival to get a good vantage point to see the show.

Friends Ron and Jule arrived on Thursday to claim our spot, and also hosted the PYC Raft-up.  We used their hook (actually a tandem anchor) and rafted with both Night Sky and Lady of Leisure.  We also had 2 power boats tied to our "raft".


Our combined crews pooled resources and enjoyed meals, drinks and camaraderie throughout the weekend.  The high bridge of Lady of Leisure provided an excellent vantage point to view the Friday night show, and the dunes of "Spoil Island" provided a similar vantage for the day show.

For dinner on Saturday, Ron and Julie worked hard to conjure up a great fish fry.  The show was, as always, spectacular with great feats of aeronautical acrobatics by the Blues and several other historic planes dating back to WWII. 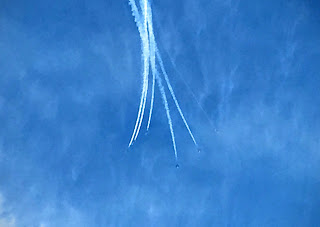 The turn-out of boats was amazing.  As I said, the Ft. Mcree anchorage was getting close to capacity and many day sailors and boaters anchored or drifted in the Bay area just north of the Pensacola inlet and east of the Pensacola land cut.  Everyone seemed to have a great time, with many people camping out in the mild weather, spending the night on boats or in tents on the dunes.


And if that was not enough, Pensacola was graced with a visit from the sailing yacht AMERICA - a 139 ft. schooner replica of the famous racing yacht that won the first America's Cup in 1851..Some PYC Members got the opportunity to sail on her and view part of the airshow from her decks.  We had towed the ski-boat with us so that we could catch up to her on the bay and get some photos of her under sail.  Here are a few of the shots!

Now if an airshow and a Sailing Schooner under sail is not "Making America Great Again".....well I don't know what is! 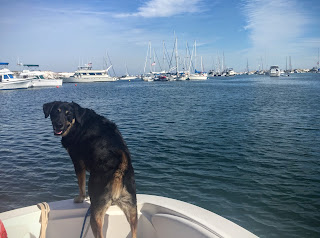 Salty certainly approved of the weekend.  He always enjoys his time on the boat (well maybe not so much when we are heeling under sail)......but a great beach and swimming in the ocean just always seems to make it worthwhile! 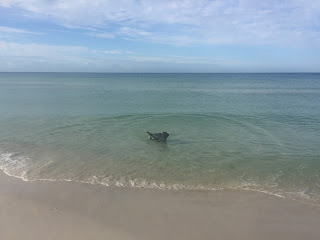 The weekend ended with the traditional sunday PYC brunch with endless Mimosas, Bloody Mary's, and breakfast provided by PYC members.