Back to the USA!

Our last stop in the Exumas was Highbourne Cay - again, a favourite stop for us.  But before Highbourne, we had one last anchorage stop at  at what turned out to be a great little spot between Bell Island, Pastue Cay, and O'brien Cay. 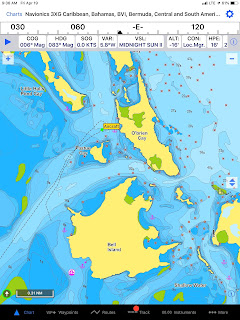 We anchored right by a snorkeling spot shown as "aircraft".  We left Emerald Bay and sailed north, entering the Exuma Bank at Dotham Cut, just north of Black Point.  I had never used this cut before, but it seemed wide open on the chart, settled conditions and we would arrive about a half hour after low tide - this should be a good time and good conditions.  While the passage was uneventful, I was however surprised at the turbulence in the cut.  I think we have had easier passages through Little Farmers Cut, Galliot Cut, and Cave Cay Cut (all located south) under worse sea and tide conditions - so just a note for future reference.  Even though it looks good on the chart, I don't think I would chose Dotham Cut under anything other than good conditions. 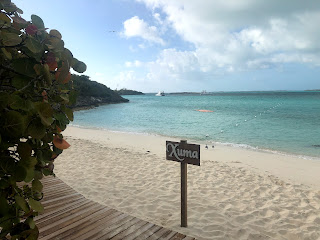 Its hard not to love a view like this!  Beautiful beach at Highbourne Cay, just outside Xuma restaurant.

Like most places in the Bahamas, prices continue to rise.  Does this mean I am just becoming a curmudgeon on a fixed income......or are the mega-yachts in the Bahamas that have "no budget" just driving the prices up?  I think its the latter.  I can't believe the number of mega-yachts we have seen this year -  filling up with 4,000 gal of diesel at $5 per gallon.  Crew of 5 or 6 with the unlimited "boat card" account at the bars and restaurants.  Yes, the tourism industry had figured that out and put prices up accordingly!  Anyway, Highbourne is still a special spot in the Bahamas, albeit expensive.

From Highbourne, we did an overnight across the Bahama Bank to Bimini.  it was a combination of sailing and motor-sailing.  With calm weather, we came across a number of boats that had elected to simply anchor part way across the bank.  No problem in 12 ft of water!  We elected too just continue on and arrived in Bimini by about 10 am the following morning.  We stayed at Bluewater marina - one of the most cost-effective stops at $1/ft.  It works out great as long as you don't need water - which is 75 cents/gal.


We have stayed in Bimini several times now - so this was just a brief stop over before leaving the next day on a NW wind.  Most people wont leave if the wind has a north component to it and several frowned at us w hen they heard our plan.  But at 12 kts and if the plan is to head south, with care and a watch on the weather, its ok.  Wee were making for Marathon and this means fighting the Gulf Stream to get south.  North winds (wind against current) can give rise to square waves which are uncomfortable at best - but at 12 kts, the saw no issues.  Fighting the current was an issue, causing us to run both headsails downwind and motors to make reasonable progress.  4.9 kts of current - really?  well this is way higher than the charts show, but I think it was real given our speed.

Arrival in the USA!

Fighting the stream, we did finally make landfall at Rodriguez Key, just off Key Largo, FL.  Home....well almost!  Again, a quick overnight stop before sailing on to Marathon.  Sailing in the Hawk's Channel keeps one out of the Gulf Stream, so progress was far better.  We refueled and managed to get a slip at Marathon YC for a couple of nights - good move as we sat out some weather there.