We arrived yesterday afternoon in Dunedin, FL.  Dunedin is west of Tampa and is a beautiful little town with a nice but basic municipal marina, and many small restaurants. 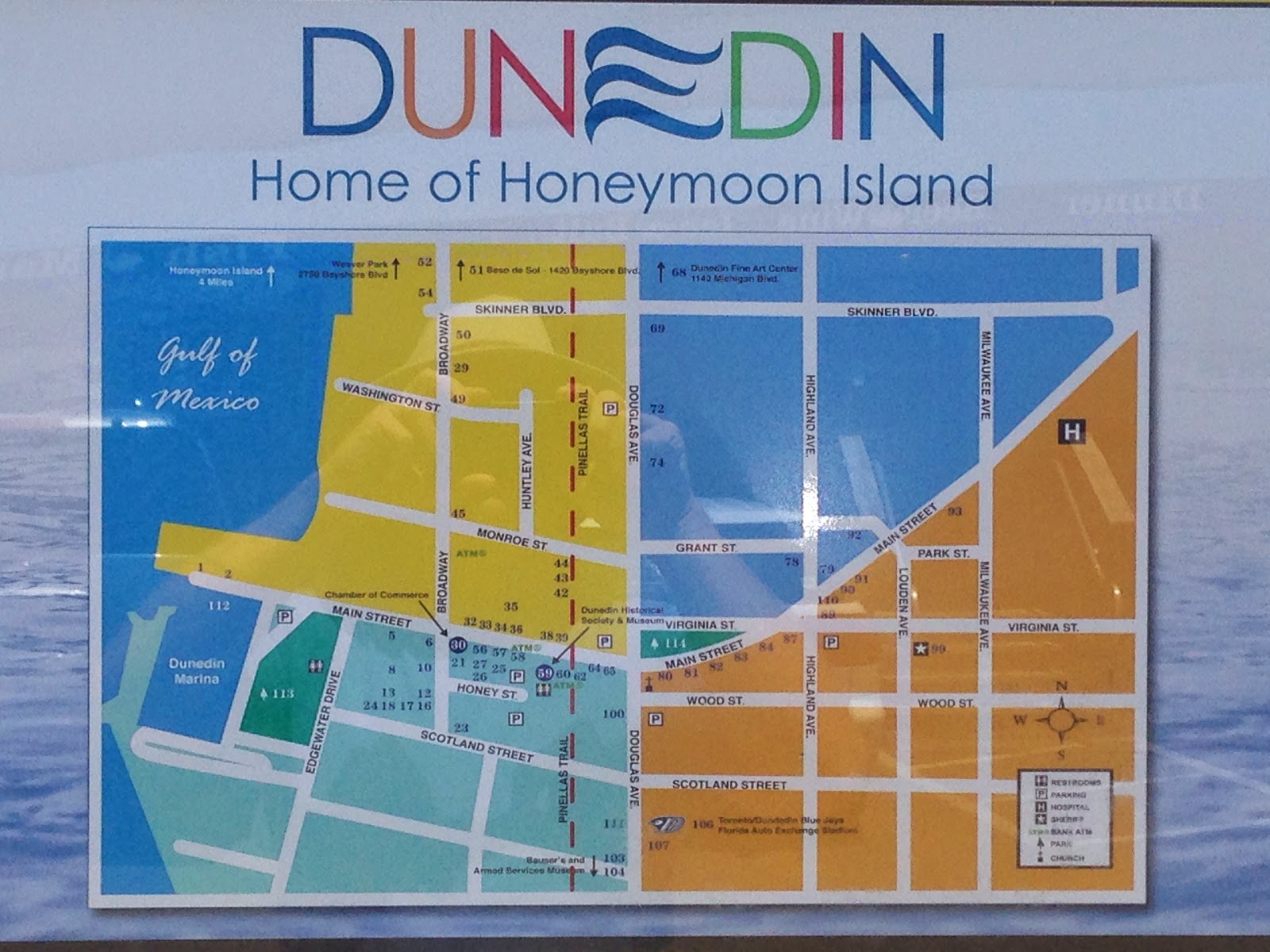 It took a day longer than planned to get here as we stayed an unplanned night at Pass-A-Grille.  This was a surprisingly nice town also.

We were actually heading up the ICW for Dunedin  when e came upon a new "fixed bridge" and had an interesting little episode.  Here's the brief version.  Since discovering that there is a 54 ft bridge on the way to Miami (our mast is 62 ft), we always check the bridge clearance 2 ways.  First, on the charts, and second by looking at the depth/clearance staff gauge with binoculars before we approach the bridge.  This has just become a habit to avoid a costly, avoidable, and embarrassing mishap with a bridge.  Those things tent to make it on You tube!!

Our charts (new this year) indicated the bridge as a bascule bridge but under construction - the bridge was not a bascule bridge! Similarly, our 2014 Waterways guide indicated a bascule bridge. Electronic charts from Navionics and iNavX gave no better information.  So we called the adjacent (older) bascule bridge tender and inquired about the clearance.  After some confusion over our question, the answer was a non-reassuring "I think its 64 ft".  Seeking confirmation, I radioed Tow Boat US - their answer was "call the Coast Guard - they will know".  So I hailed the US Coast Guard.  After checking charts, and other information the Coast Guard came back with "Captain, I cannot find any information on the clearance.  But I can try to Google it for you if you like"

By this time I had decided to approach the bridge cautiously looking for a staff gauge - no gauge present.  And it didn't look 64 ft (but that is always deceiving), and the fenders were not located under the highest span.  There was a barge moored under the highest span.  By now we had probably lost an hour and the choice was to risk it, or to go out into the ocean and by-pass it.  Unfortunately the next inlet was some distance up the coast.  A third option emerged and that was to spend the night in Pass-A-Grille and make the decision tomorrow.  I decided this was the most sensible thing -so we spent a night in Pass-A Grille which turned out to be a very nice little town.  I am glad we stayed.

Some internet research revealed the grant application for the bridge - which showed a planned height of 64 ft..  Hmmmm.......planned height, and the fenders are NOT situated between what visually appears to be the highest span.  I am still not completely convinced!  So we opted for a very nice ocean sail up to the Clearwater Pass yesterday then on into Dunedin.  I also sent an email to Florida DOT - nice and polite, requesting that they install a staff gauge, and inform the Cost Guard (and their bridge tenders) of the official bridge clearance height.  So far I have not received a response. 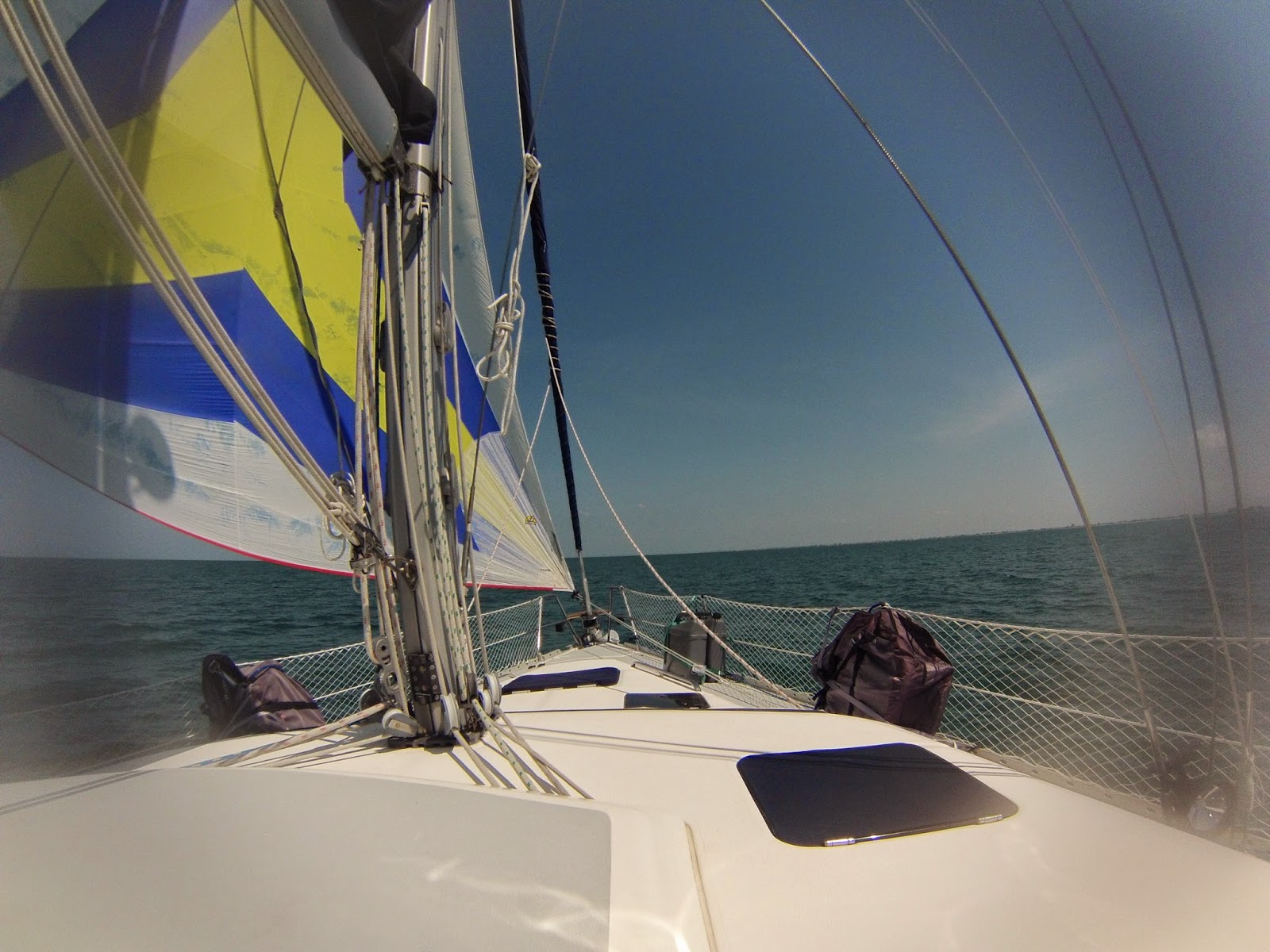 Then the wind died - as in completely.  No wind.  Some cloud started to build and the wind picked up again.  In no time at all we were in 18 knots with the UPS sail........very exciting, but time to furl it as the wind was still building.  We furled the UPS and switched to the regular jib.  We were good for a while until the wind shifted and was right on our nose.  I suspect a cold front from the north was passing through.  On entering the ICW at Clearwater, we motored up to Dunedin.  Many shallow spots, but a glass of Captain Salty's Anti-grounding Rum kept us off the bottom and got us safely into the marina. By now it was blowing 20+ and we docked without incident, to the praise of several onlookers and adjacent boat owners.  More anti-grounding rum ensued!! 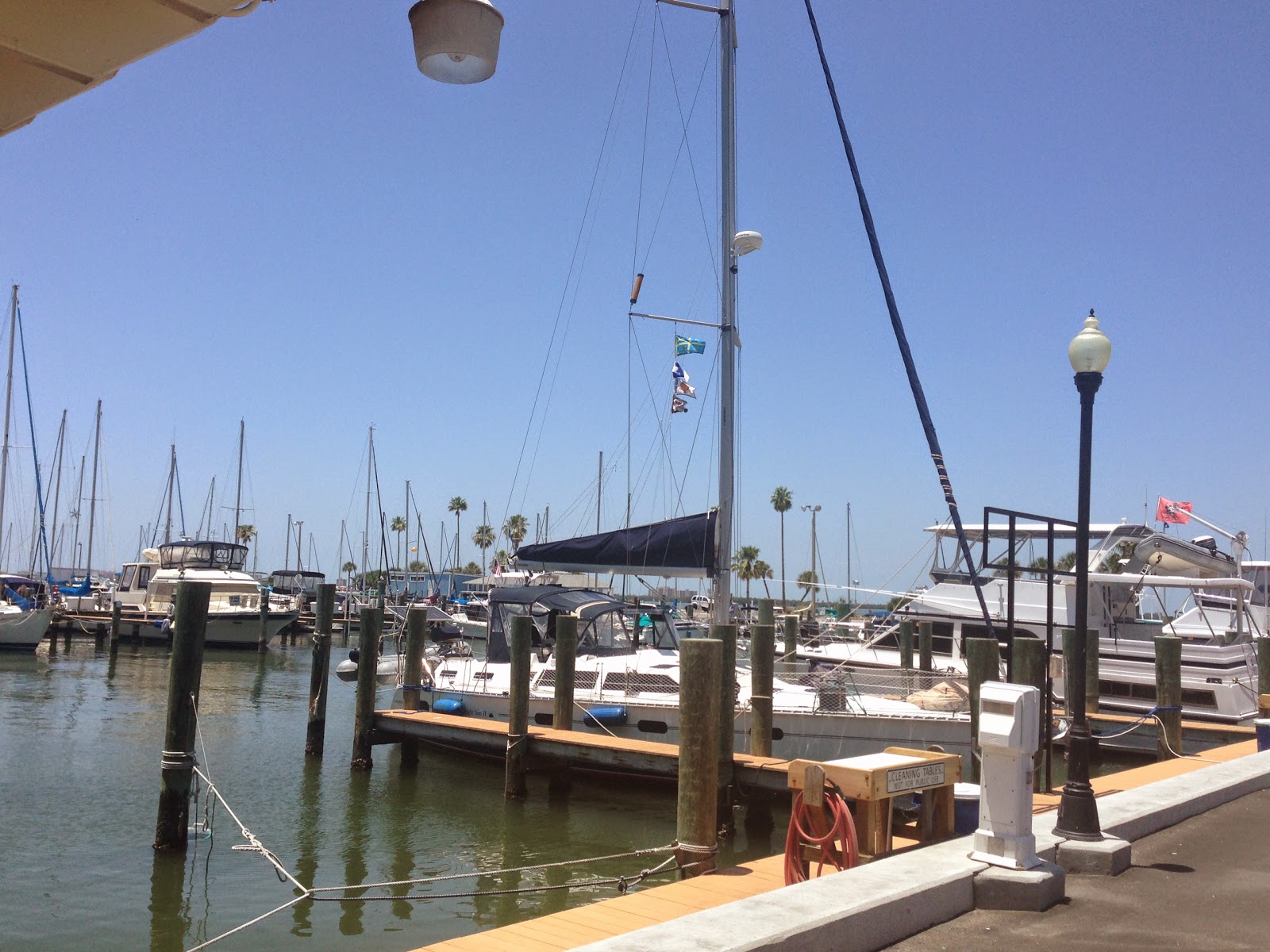 Some images of Dunedin - we are planning to stay here several days for a variety of work and family reasons, and I think this will be a good location! Nice, quaint small town.  Friendly and helpful  Marina staff, and plenty of restaurants and bars within a few blocks - but with no crowds!  Yes, if i have to be on land, then this is my kind of place! 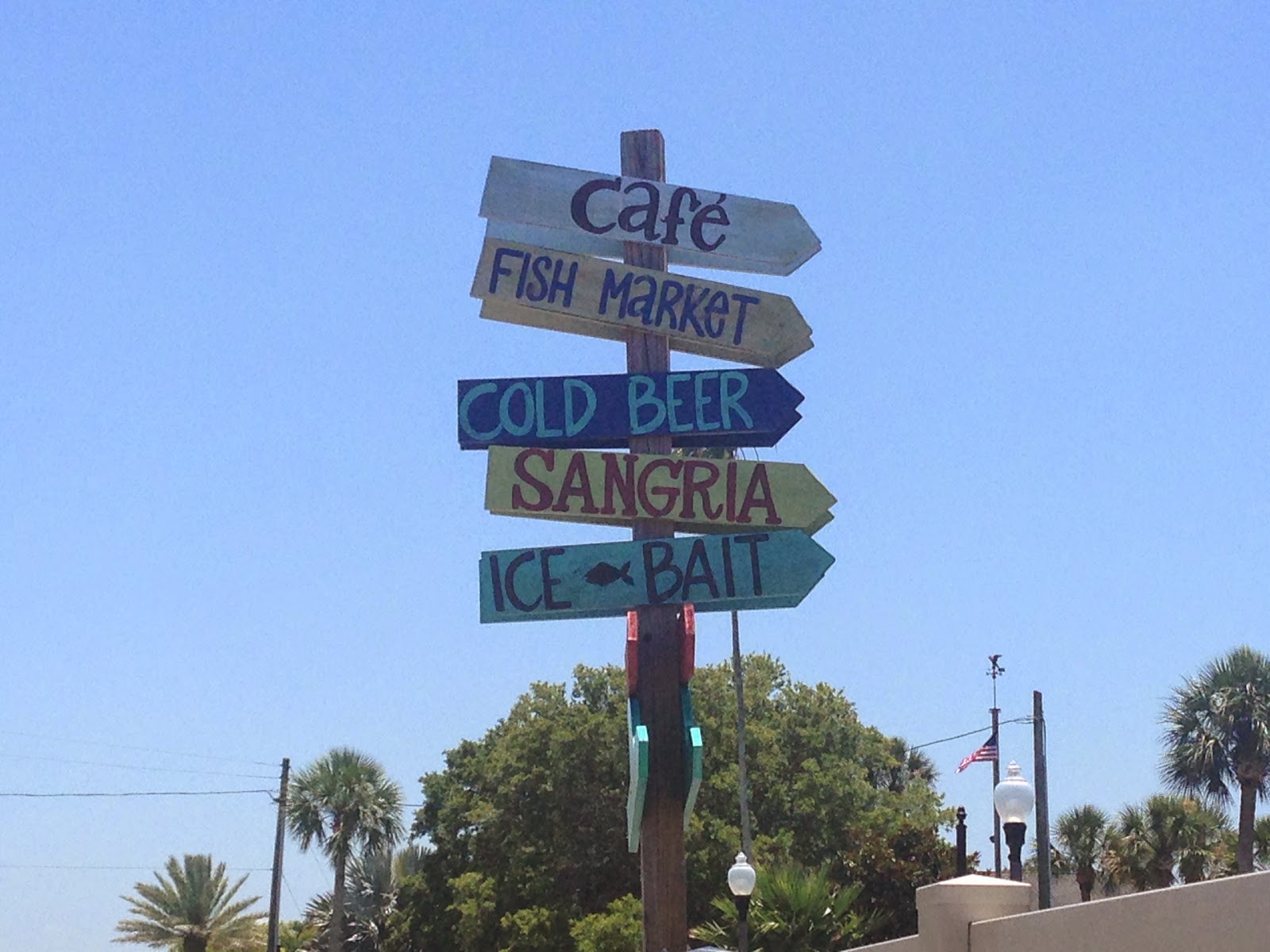 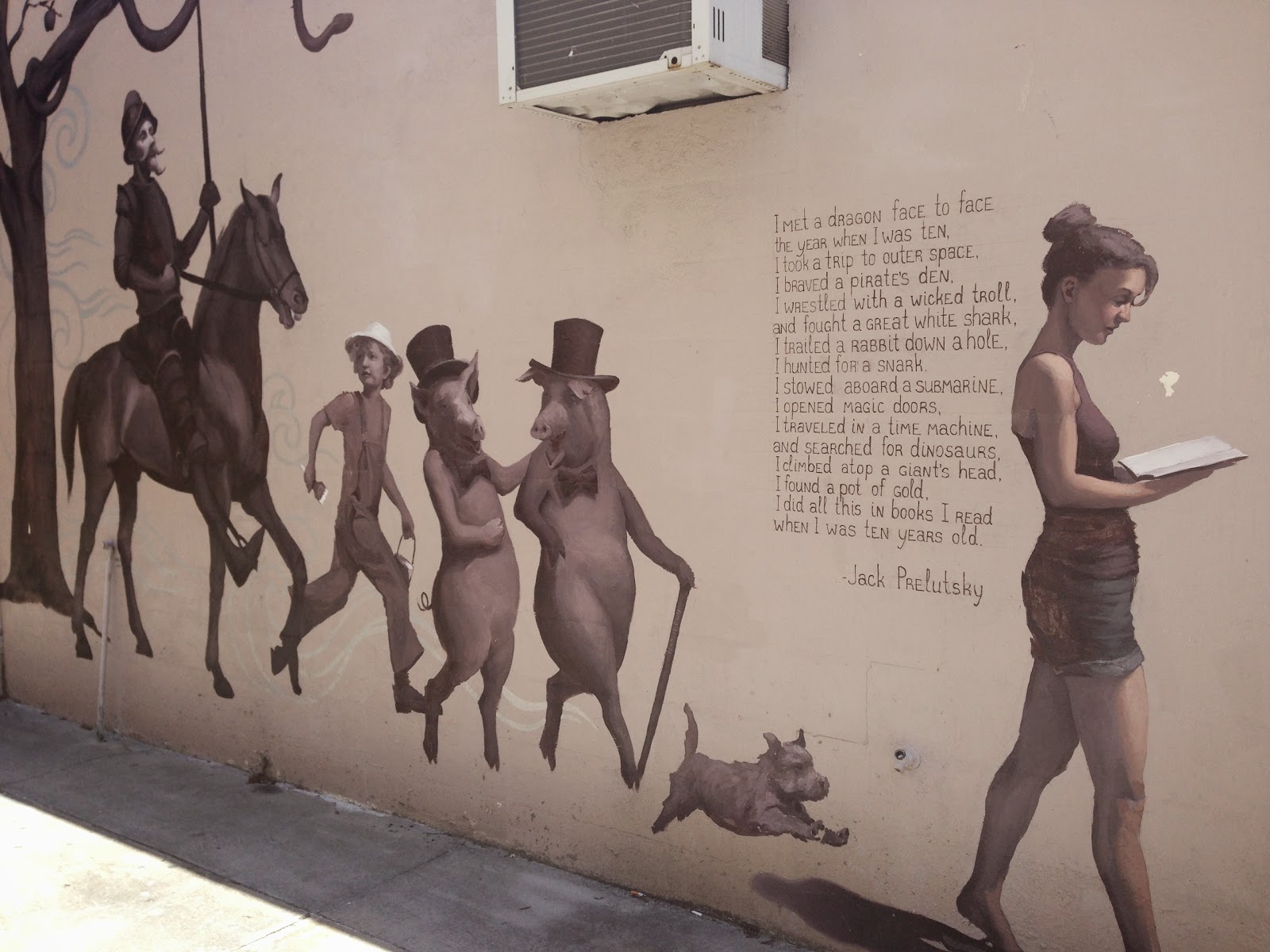 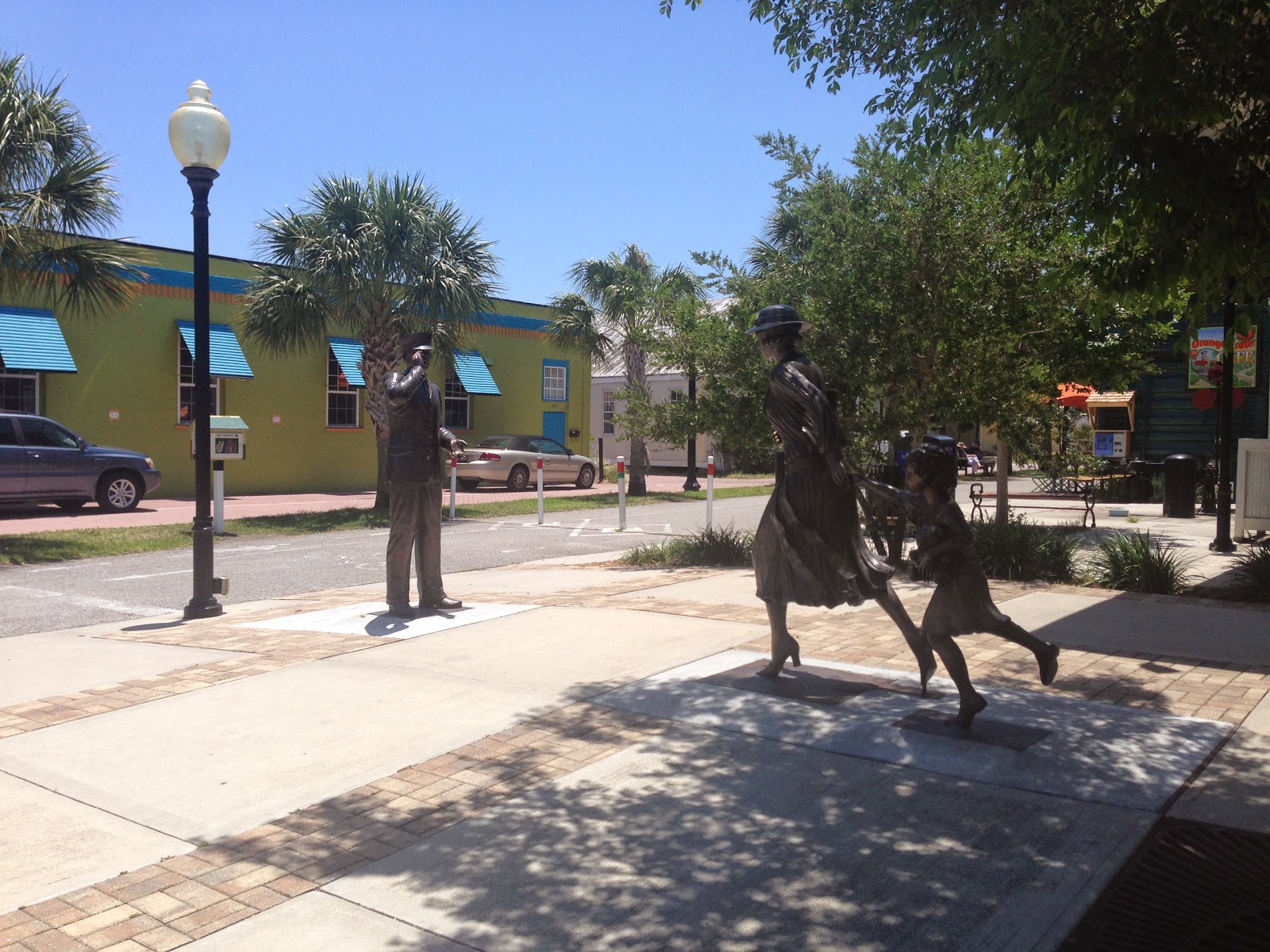 We are still in St. Pete's enjoying our stay.  This has been a good spot to make a side visit from and is very handy for the town area of St. Pete's. 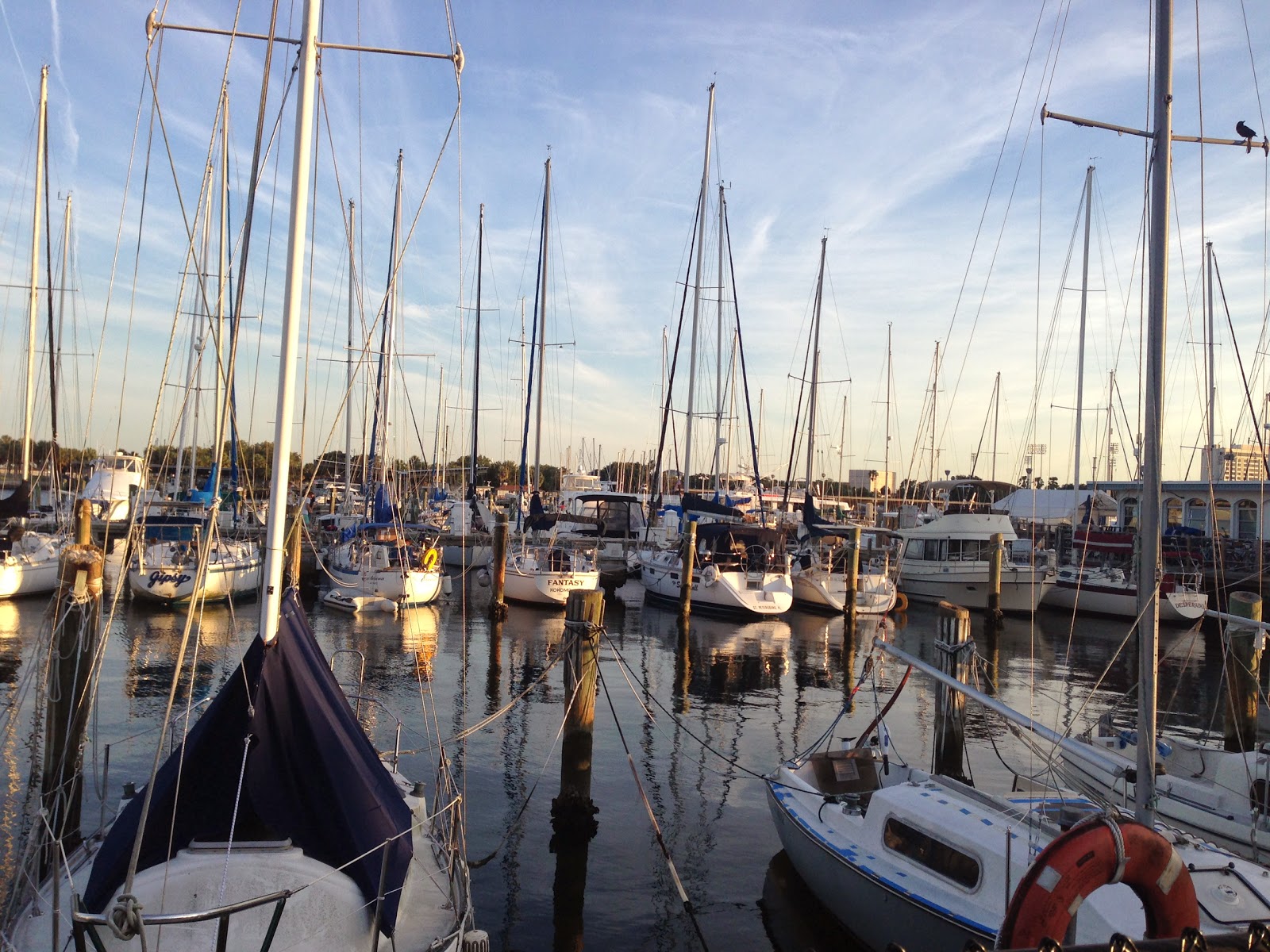 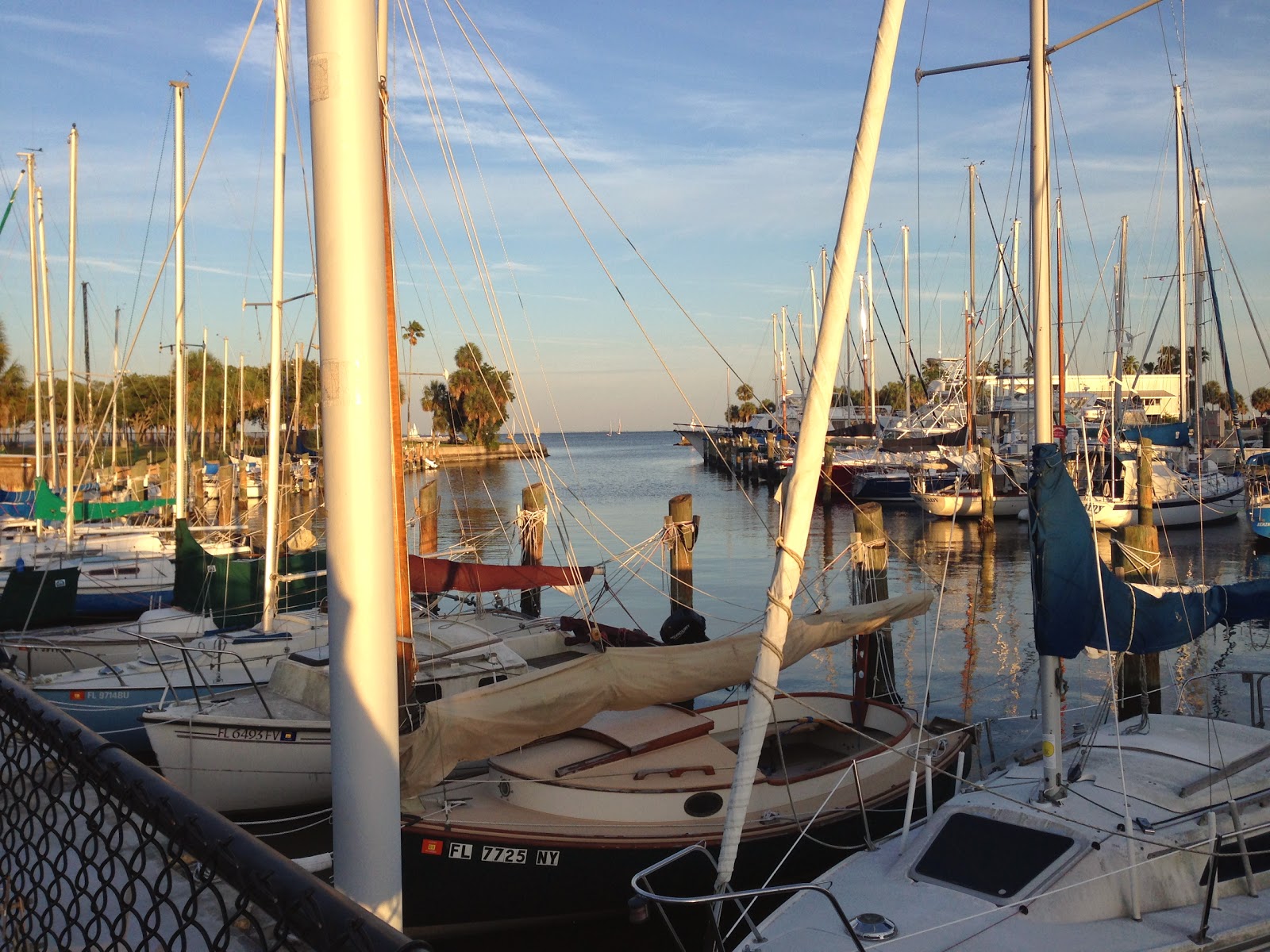 The marina opens out directly into Tampa Bay which is a nice sailing ground.  Last night I counted over 15 small sail boats just outside the marina entrance. 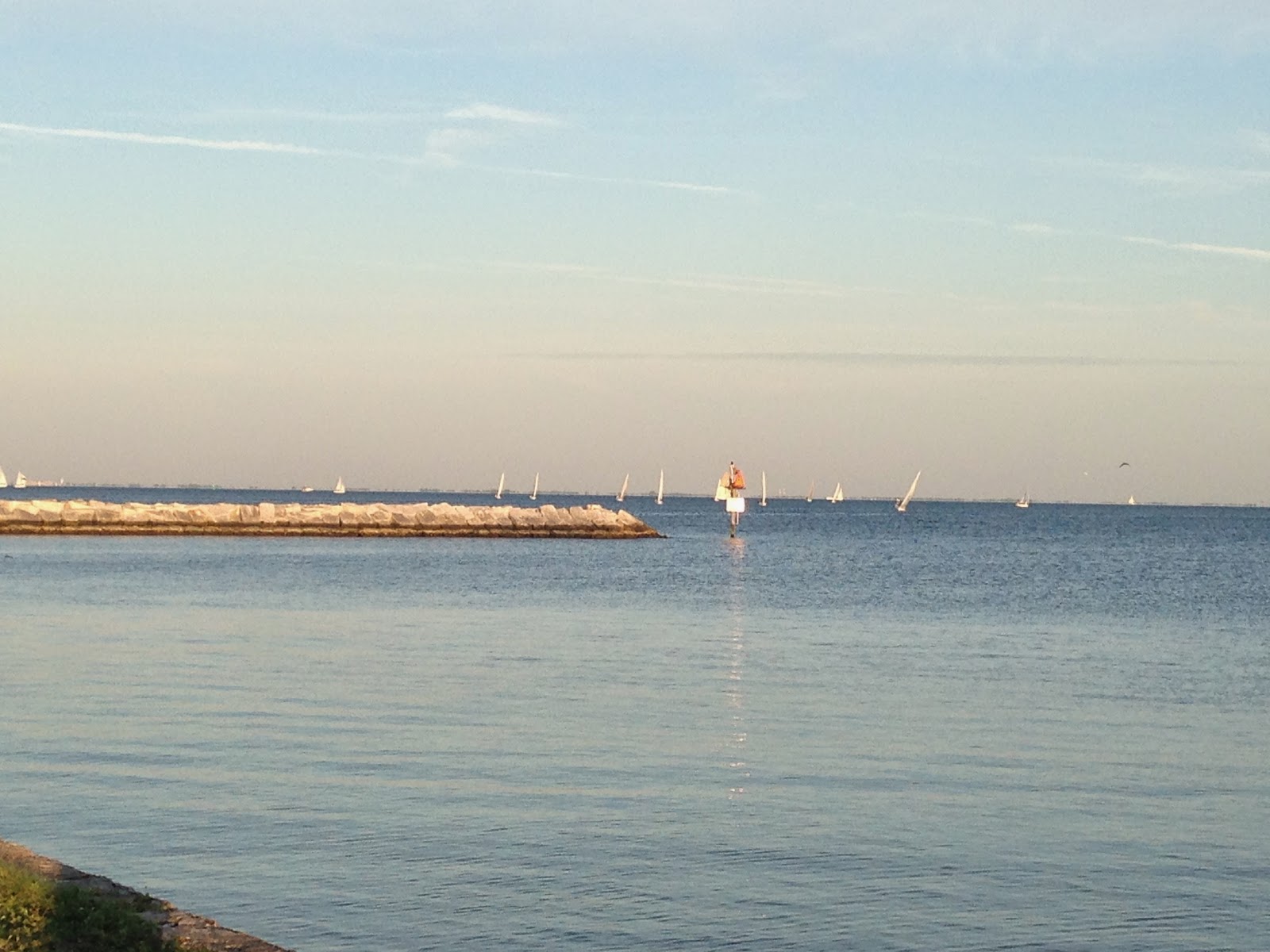 Restaurants and bars are a short easy walk from here, but the marina is far enough away to avoid the noise.  The cold front has come and it is a welcome break from the hot weather.  It was actually quite cool last night and today with a breeze, temperatures are in the high 70s, and with low humidity - very nice! 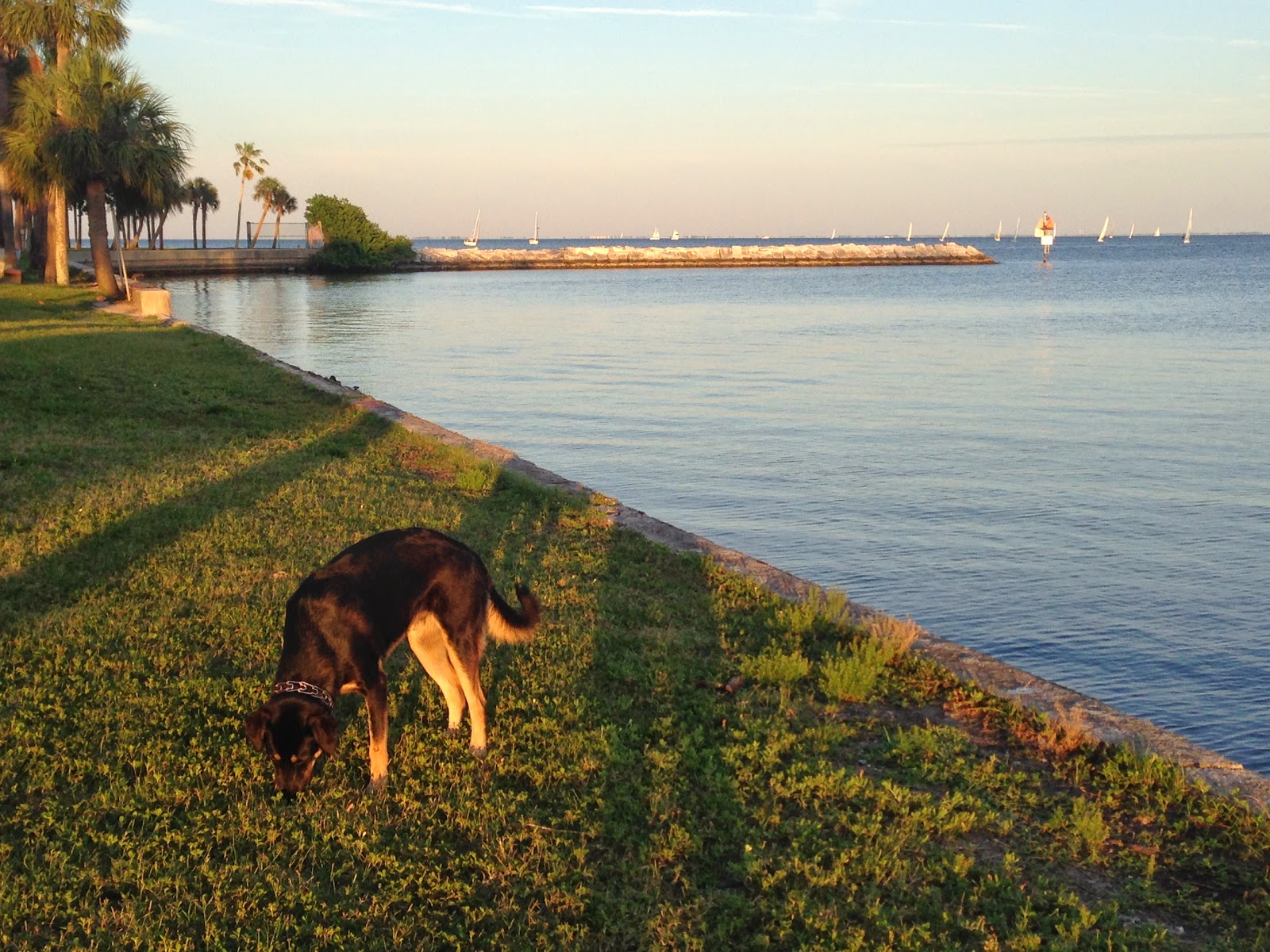 Salty had his morning walk today and a quick swim from the beach.  He loves it here and when we exit the marina gates starts to walk immediately towards the beach.  He gets very disappointed if I point him in another direction.
Posted by Neil at 8:47 AM No comments:

We arrived in St. Pete's on Tuesday and planned on staying a couple of nights.  Well we have been here a couple of nights and like it.  Which is a good thing as we have also had some thunderstorms come through.  I believe there is a mild cold front passing through the next couple of days - and while the winds are not too strong, I think we will just sit it out.

Yesterday, we looked at a boat - a new Cat.  And I am sure I will spell this wrong -  a Fontaine Pajot Lipari 40 ft Cat.  It was a nice boat - very sexy with cool LED lights etc.  But having slept on it I came to the conclusion that it was not  a boat I could get excited about.  Its too lightweight and does not have the "boat carpentry" I have come to love on our boat.  Its more of an IKEA boat.

Today, Salty had a good beach swim, then we had frozen yogurt - which is far more healthy than ice cream!  - especially when they serve "yoghound" for dogs!!

And by special request we had "psudo-Indian curry" at a "pseudo English Pub" last night followed by a pretty good Mex tonight.

We also found a wine bar!! 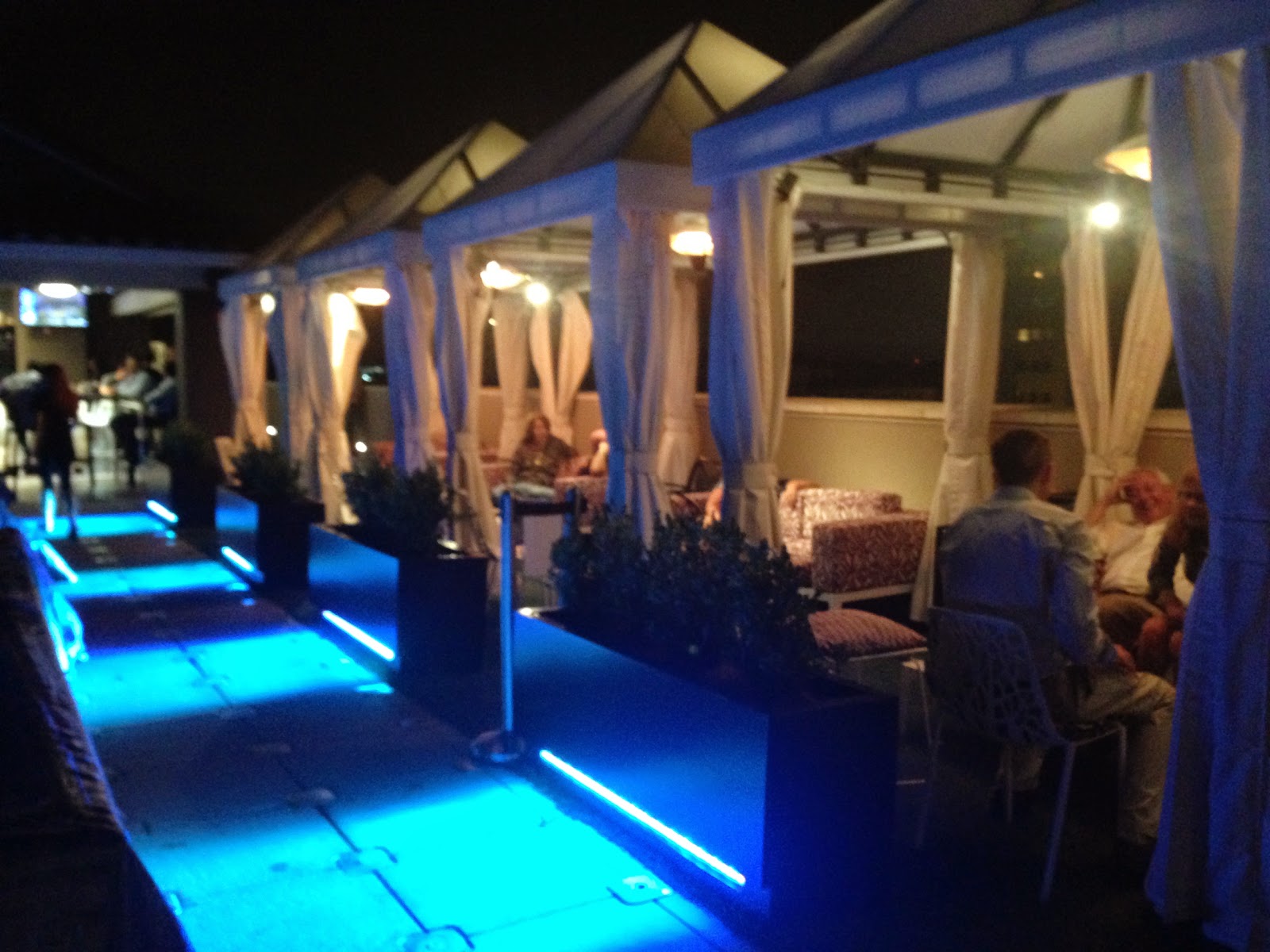 OK, that's not the wine bar - it was a roof top yuppy bar we found last night where I almost fell asleep in the gazebo that that supposedly had a $200 minimum - for that I would have spent the night!!

Well I think we are staying here a few more days - not a bad spot to hang!
Posted by Neil at 5:38 PM No comments:

Happy Mother's Day!
No, unfortunately we did not skip across the Atlantic to Italy, but we are now on the West Side of Florida.  We left Marco Island and went to Naples.......a lovely little town - in fact quite Ritzy! 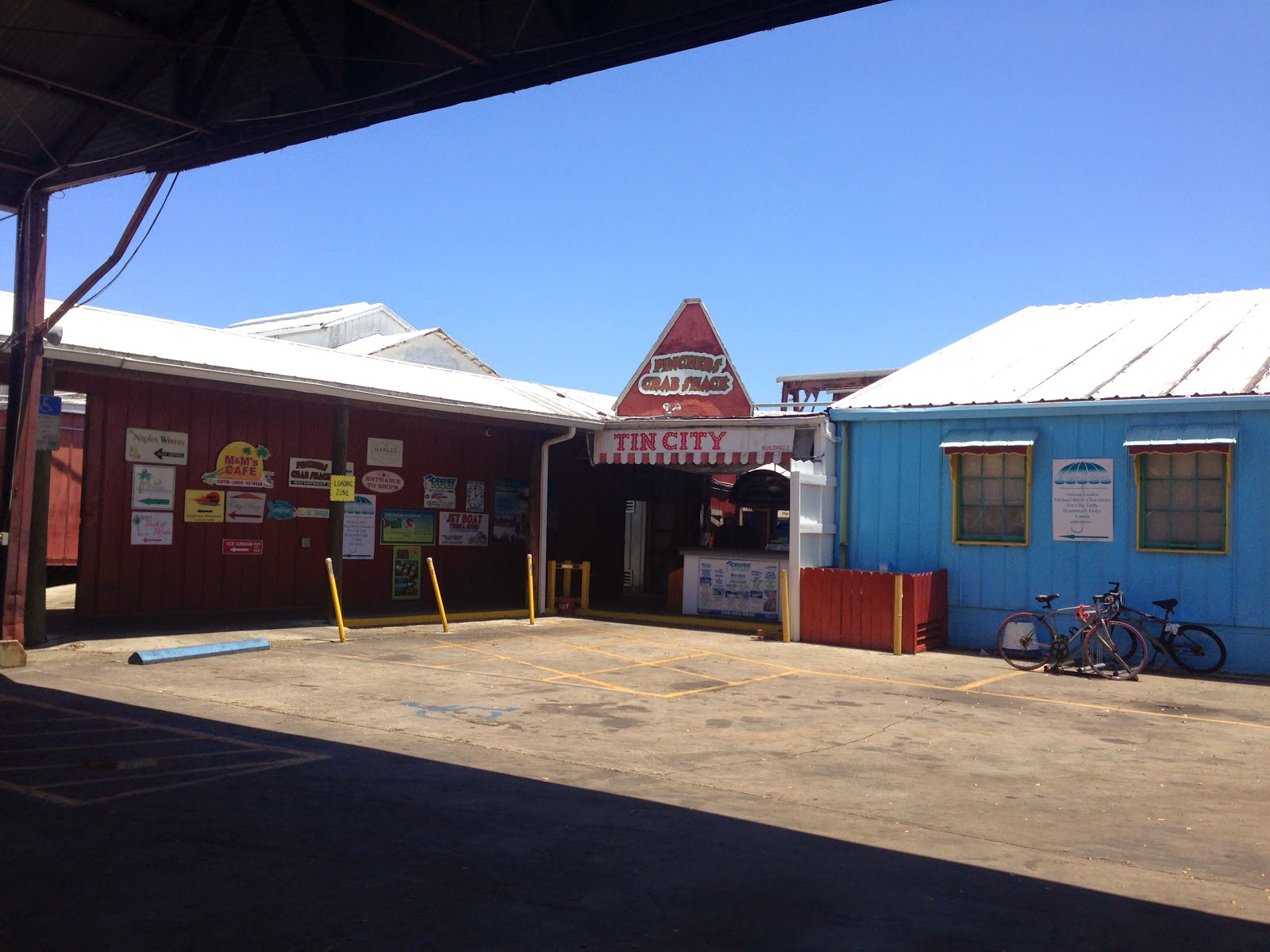 Well Ok, this isn't the Ritzy part - this is Tin City where we had a great seafood lunch.  On the way to Naples, we managed to get use from our UPS/Asymetric Sail.  The first time conditions had been right to try it,.. It was hard toget a good photo of it but here goes: 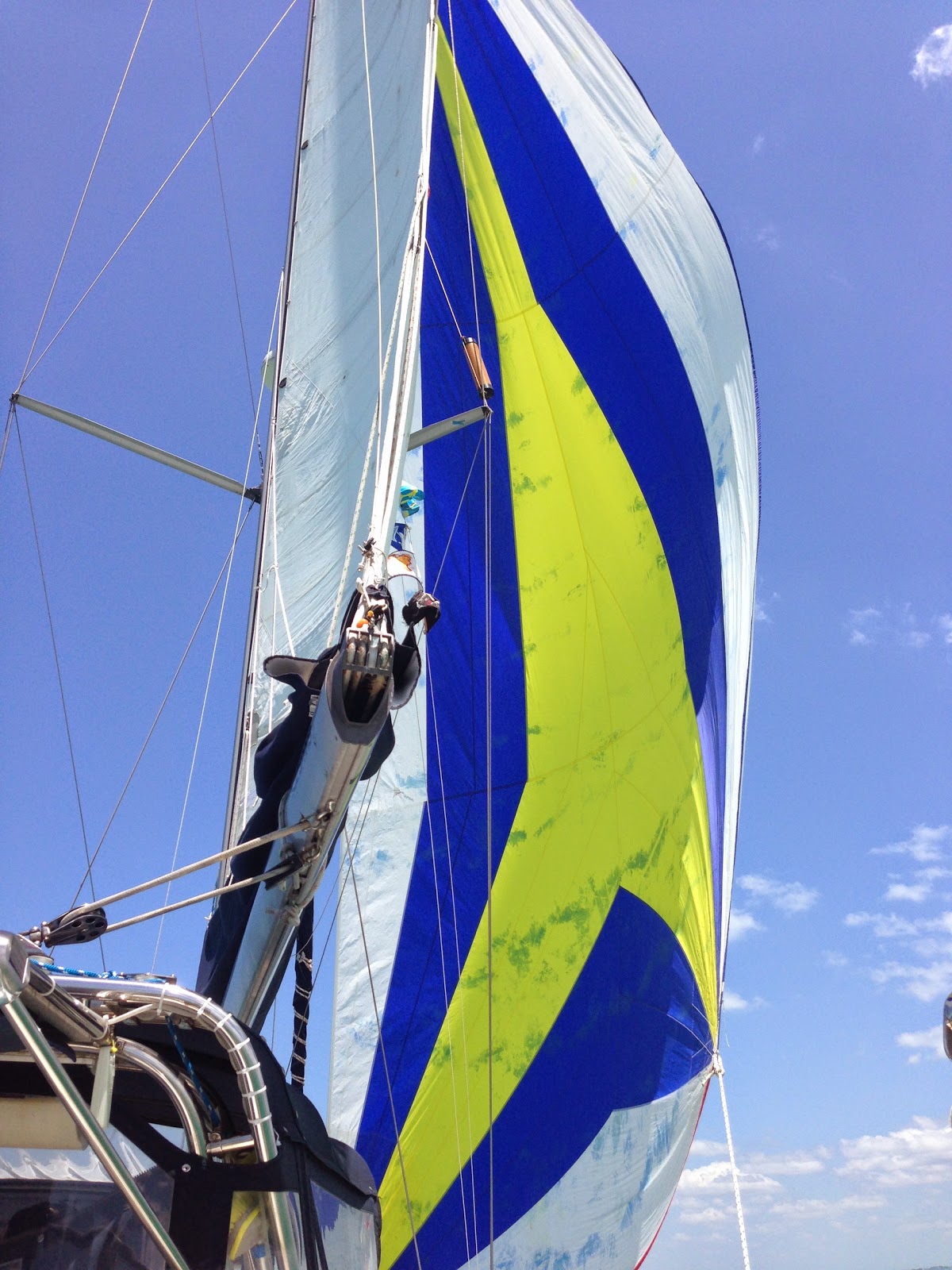 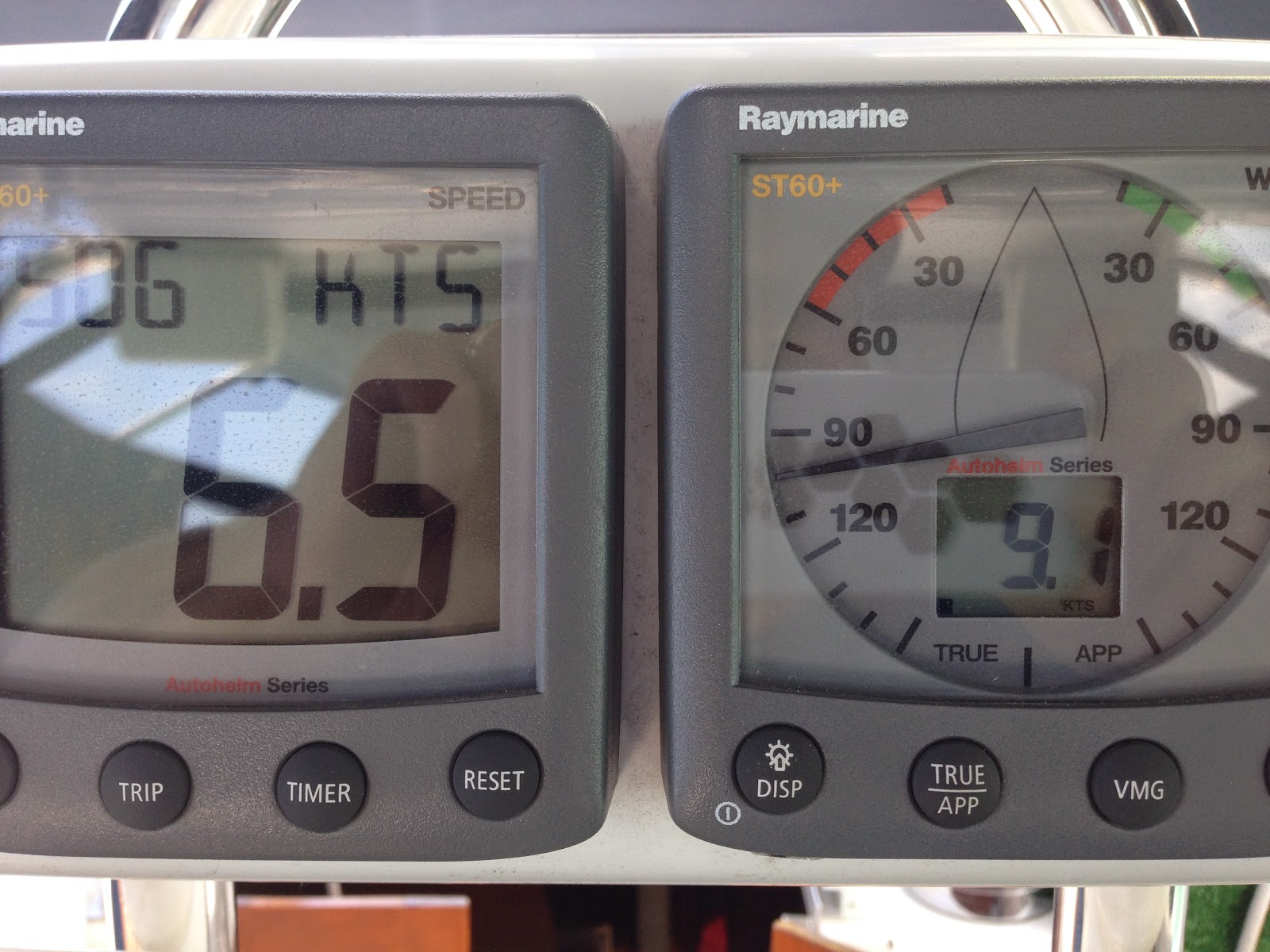 We met a nice couple in Naples on a motor yacht - 42 ft, 1983, but in immaculate shape - if anyone is interested its for sale at a bargain price! 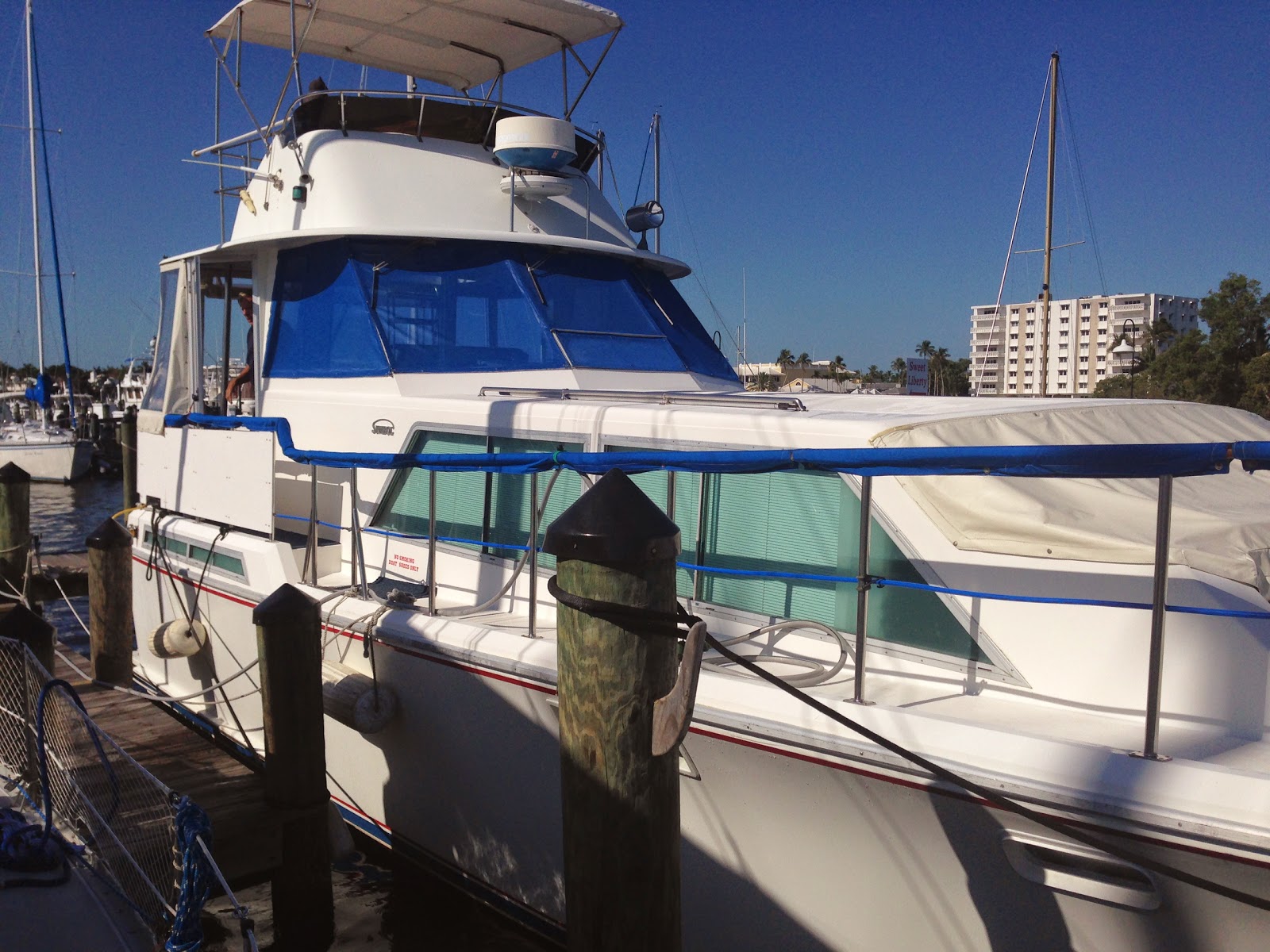 Then after 2 days, went to Sanibel Island, just staying the night there.  After that we moved on to Punta Gorda at the top end of Charlotte Harbor.  We were surprised at the size of Charlotte Harbor and it was a wonderful sail up there.  We stayed 2 nights at Fisherman's Village and caught up with our friends Ken and Pat.  For anyone familiar with Geosyntec, Ken was a colleague in Atlanta and then went on to run our Tampa office.  Ken and Pat were wonderful hosts -  we visited their wonderful home on the Peace River, had several meals together and had the loan of Ken's car to re=provision the boat.  We had a great time visiting with them and really enjoyed Punta Gorda.  Here's the sunset from Ken and Pat's back deck - stunning!! 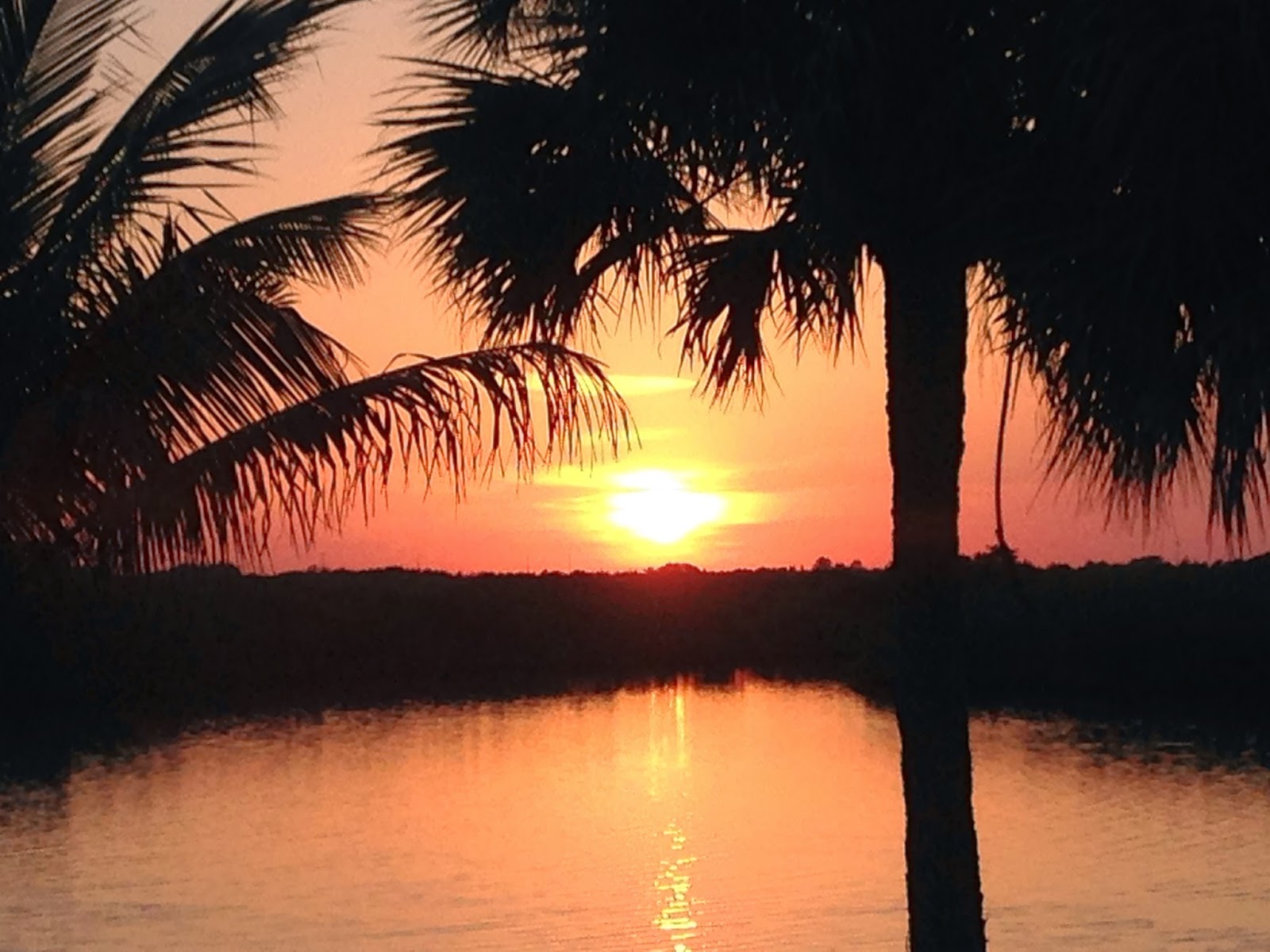 Salty also liked Punta Gorda......well he actually liked the ice cream shop, but each to our own!! 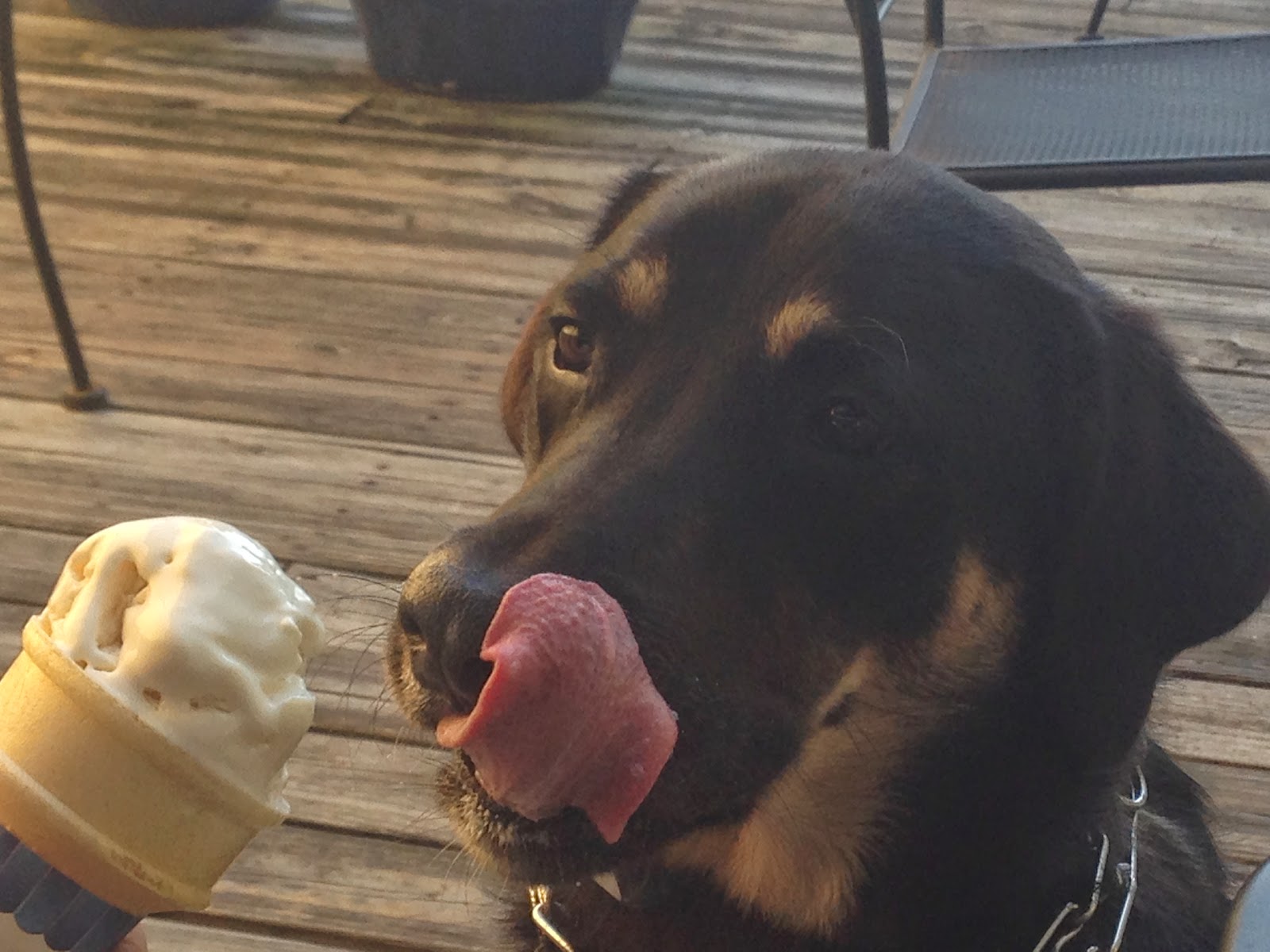 From Punta Gorda, we sailed back through Charlotte Harbor , then north up the Intracoastal to Venice - our current location.  Its hot in Venice!!  We just walked into down town and back and are glad we have air conditioning on the boat..........but still, what a great way to spend Mother's Day!  Tomorrow we are planning to head for Sarasota.

Oh - I just liked the look of this boat  - we saw it on the way to Venice. 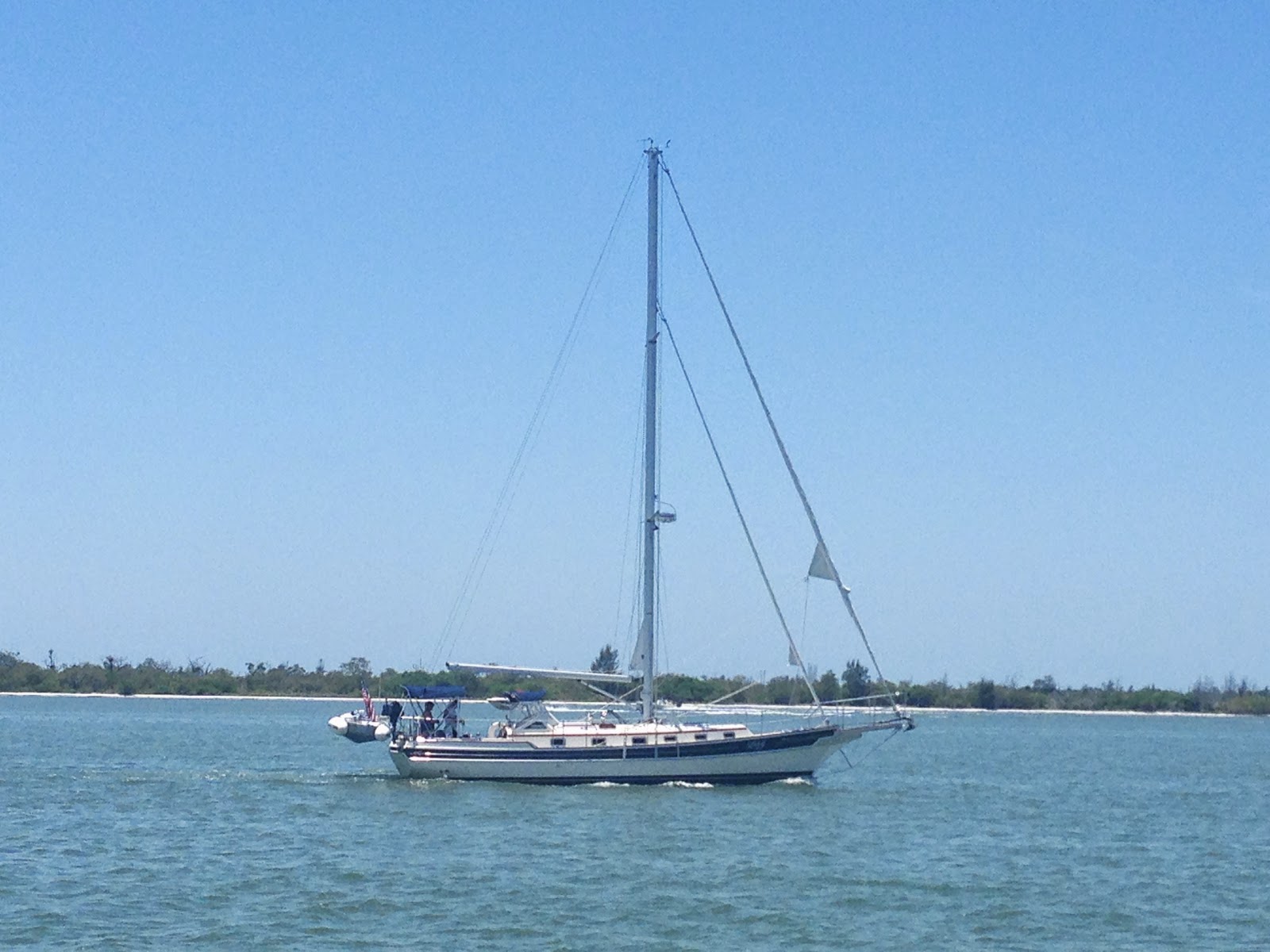 Before leaving Key West we had "just one more" - day that is.  Look at our dock neighbor in Key West!! - what a hoot! 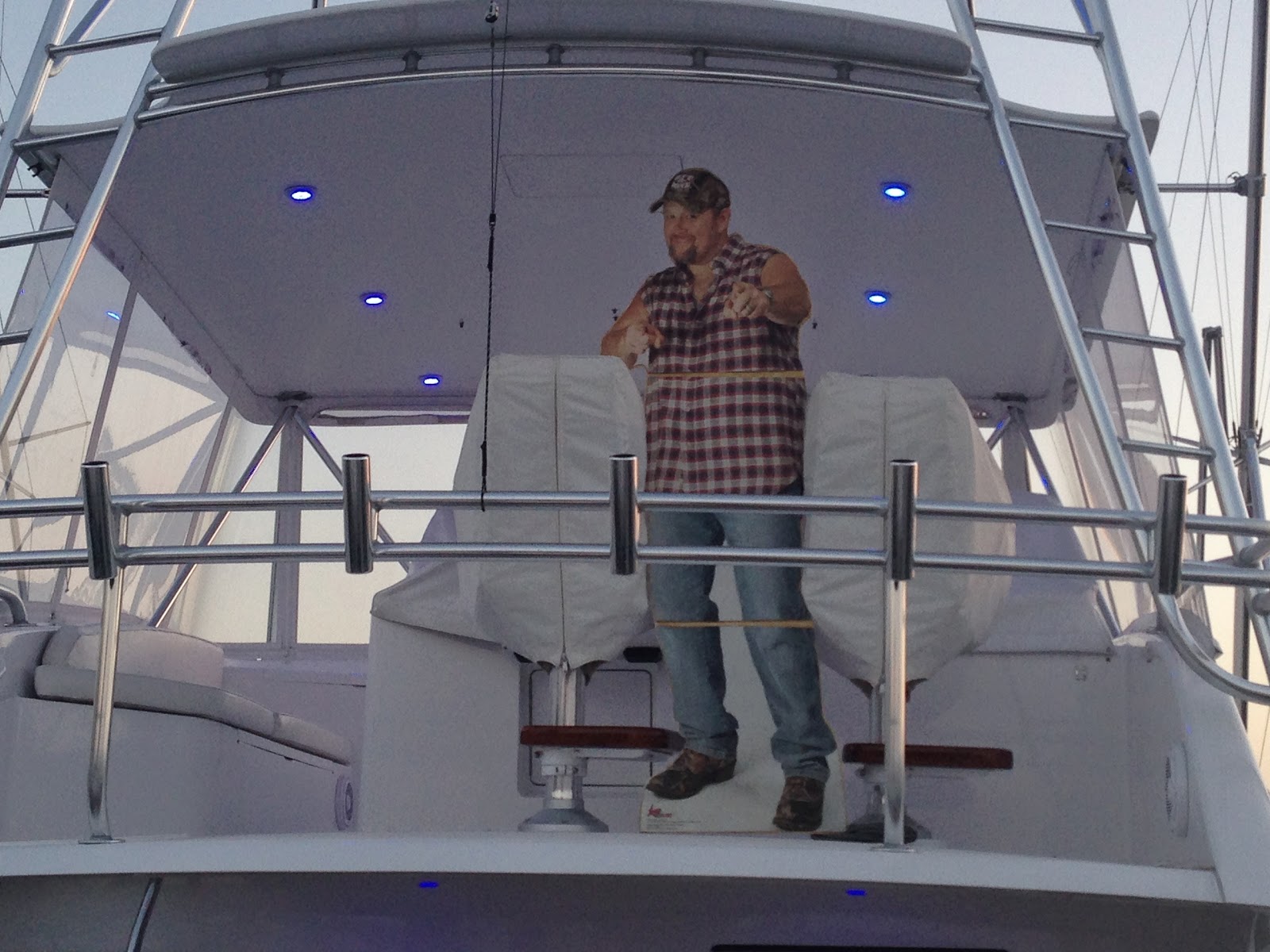 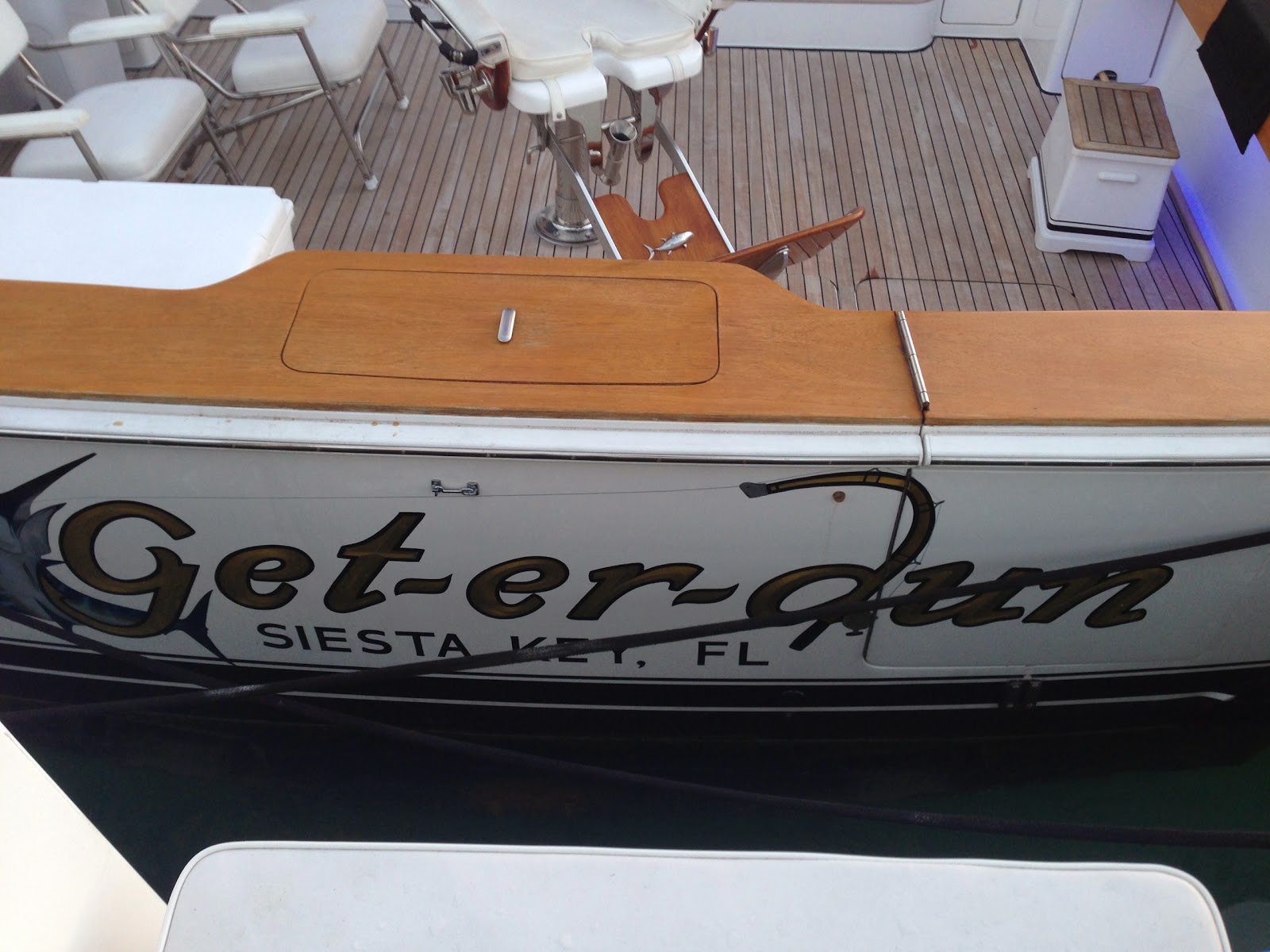 We visited some of the usual haunts too..... 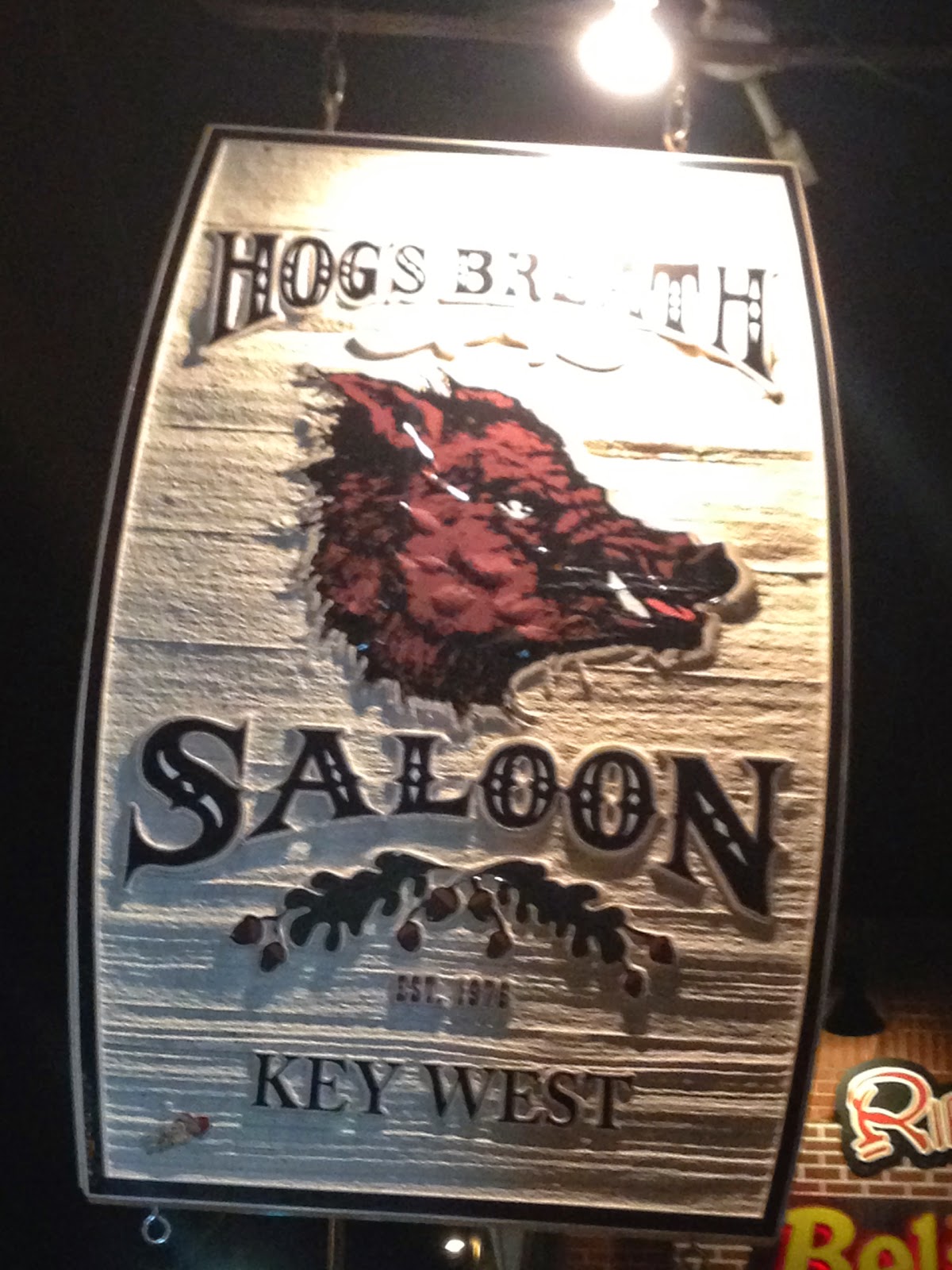 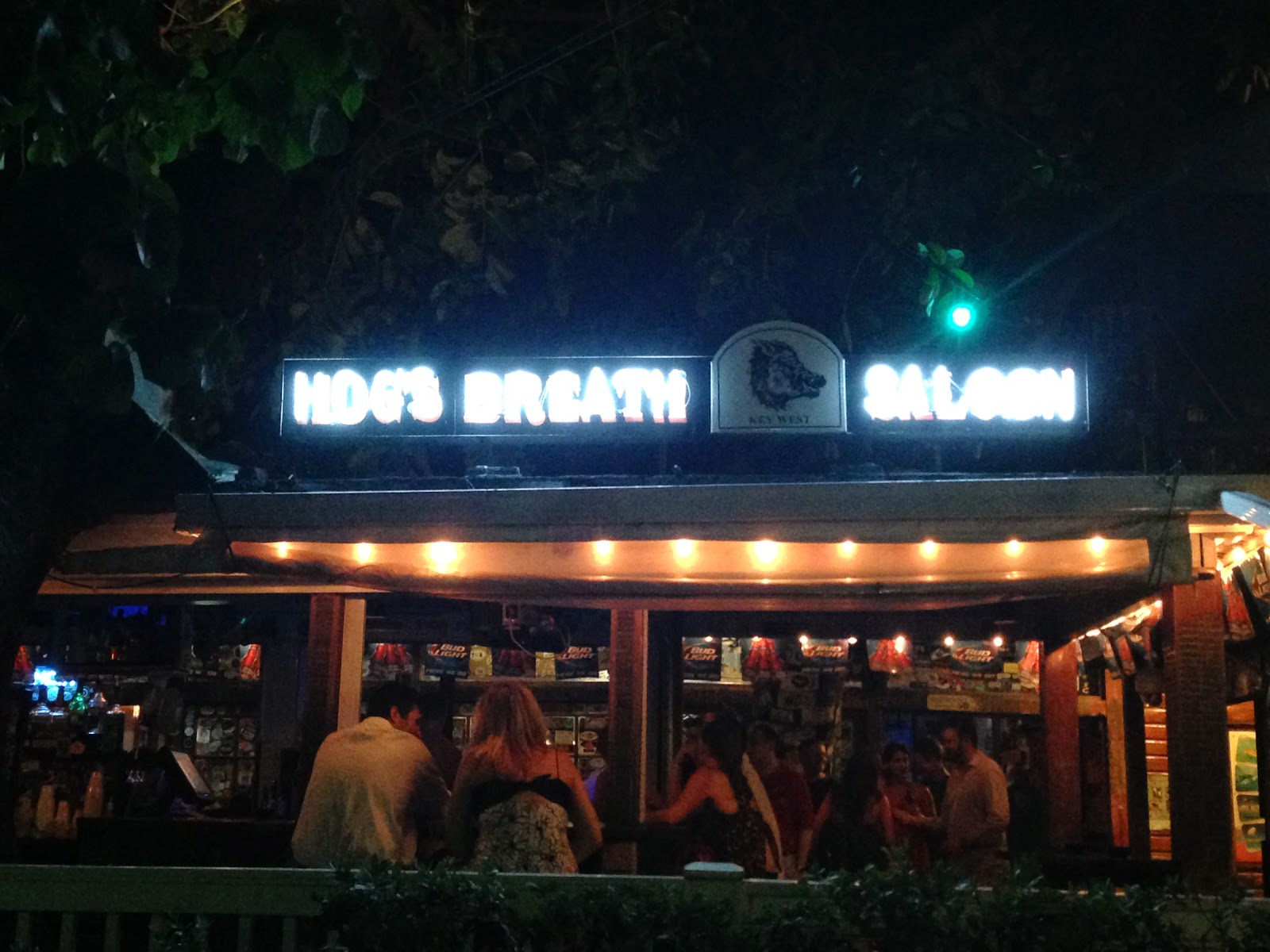 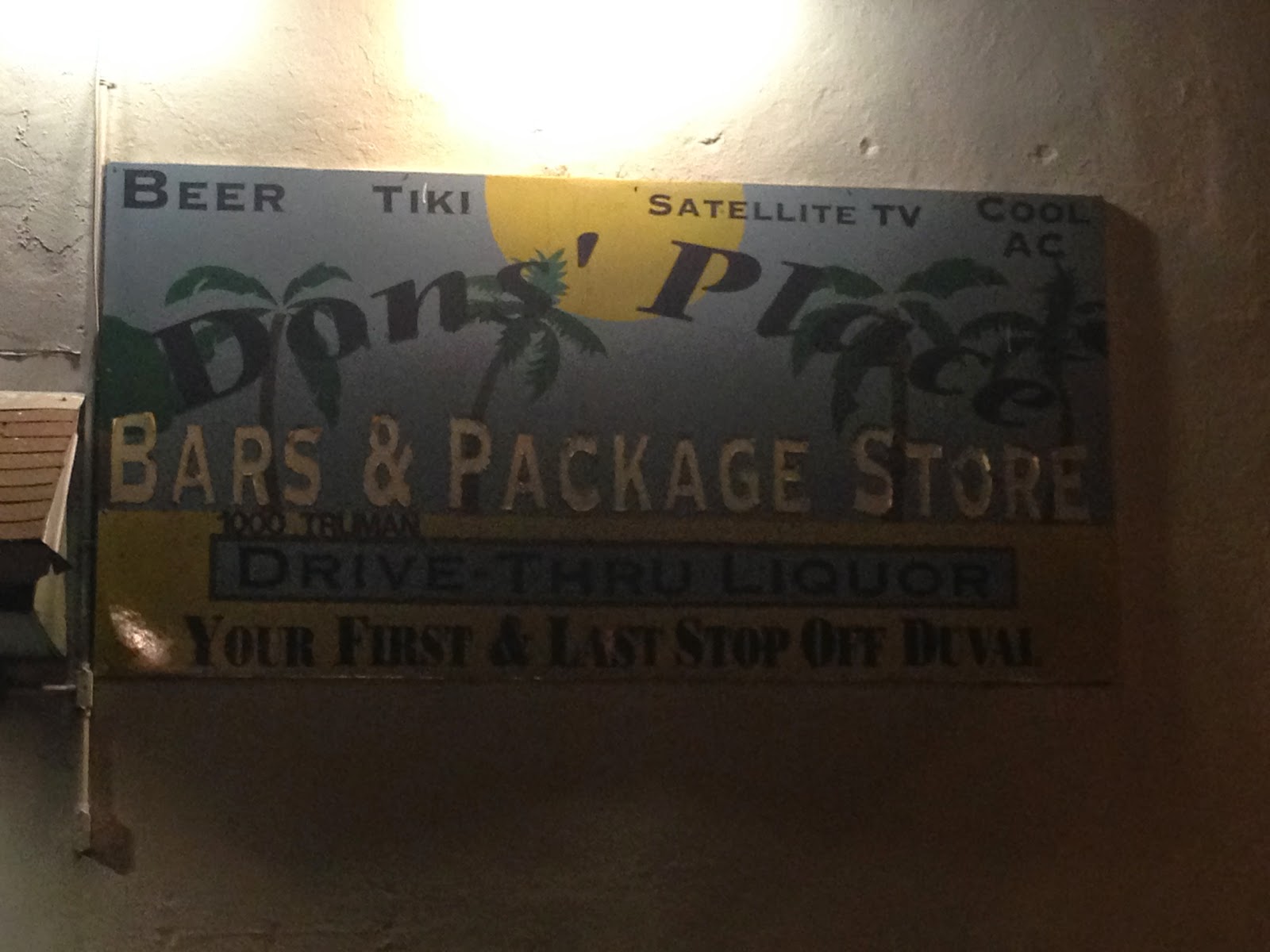 On Friday, it was an early start to head north for Marco Island.  We figured we were in for a long leg wherever we were going to go north, so we watched the weather closely then as the wind started to turn SE and S, we headed almost due north on a downwind sail.  Winds were 10-18 in the morning dropping to 10-12 in the later afternoon.  The seas were a bit rolling at 3-5 ft, but at least it was generally a following sea. 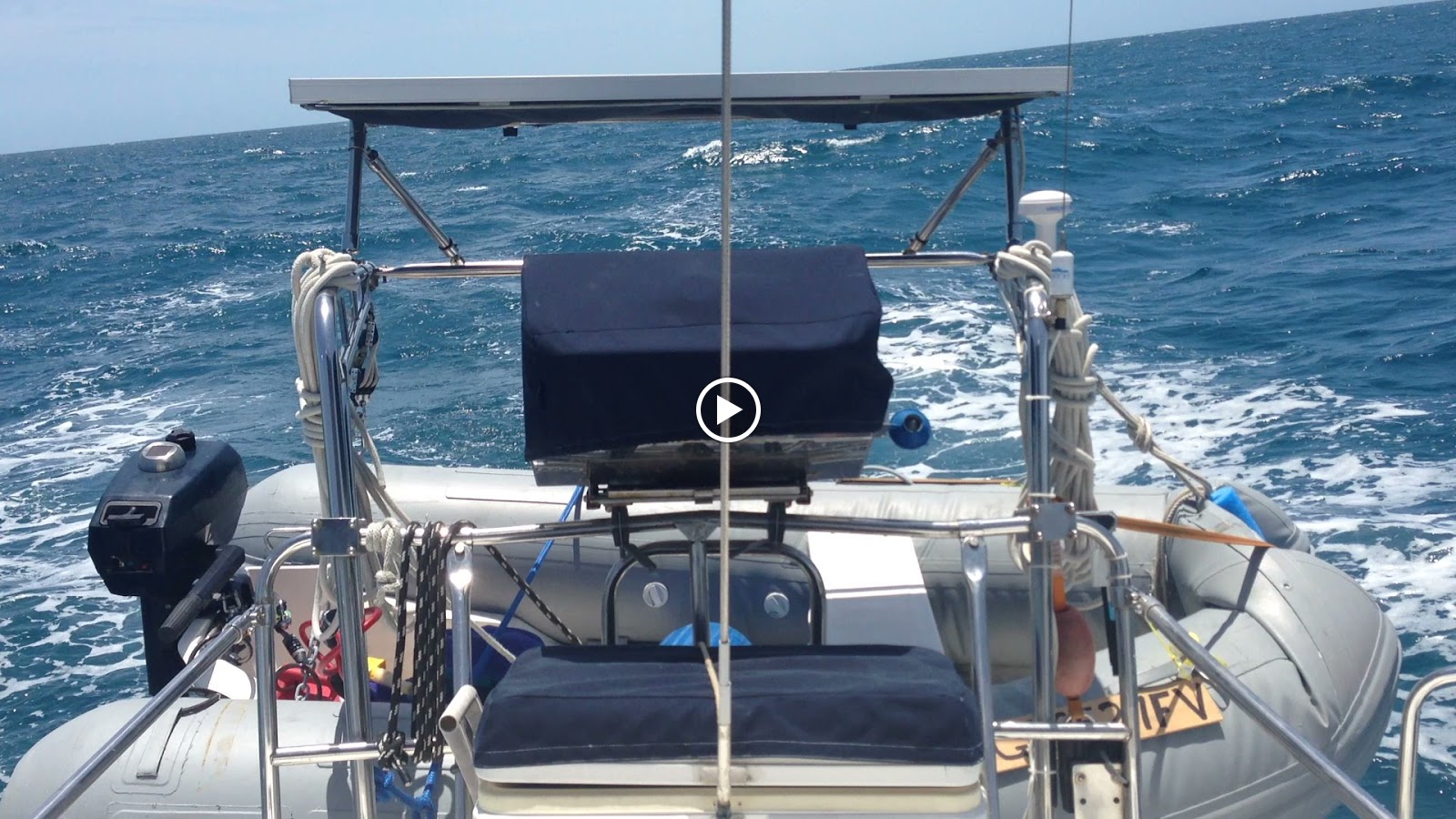 On the approach to Marco we were greeted with a dolphin escort - this was very cool!  There were 3 or 4 dolphins swimming along side our bow for about 10 minutes.  We have seen plenty of dolphins on our trip, but this was the first time we were treated to an escort.  This was very cool and one of those moments that just adds to "making the trip" so worthwhile. 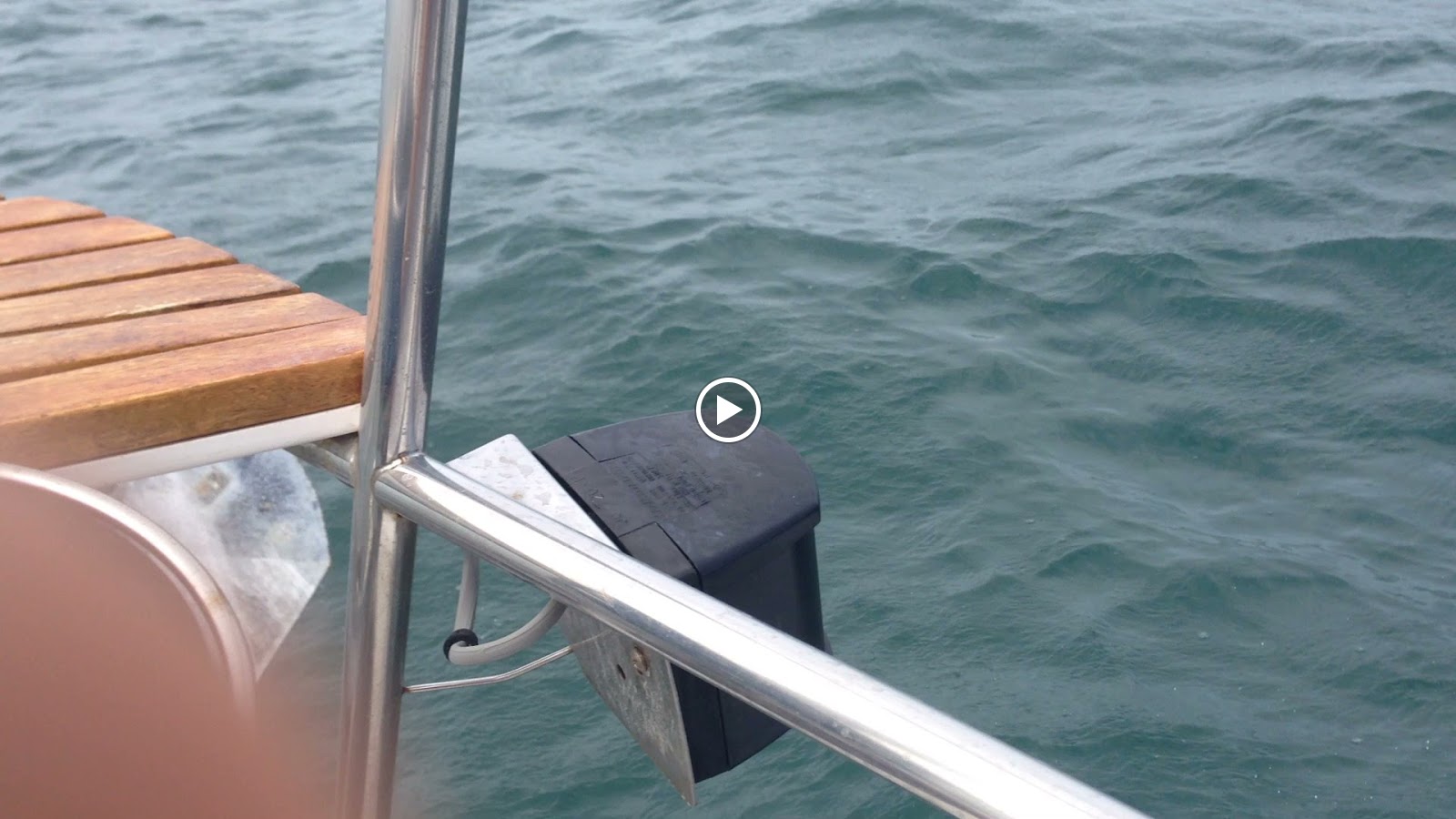 Hard to capture well on video - it was a scramble to get the phone and of course the battery went low.

So, now we are in Marco.  I was amazed at how built up Marco is.  I didn't realize just how many high-rise buildings there are here - but it made it easy to find being visible from almost 15 miles offshore!