Over the past few days we have been moving north at a fairly leisurely pace, with the exception of one longer leg from Highborne Cay to Spanish Wells.  Studying the charts would give one sime cause for concern and perhaps second thoughts about our intended route.  I include a screenshot of the area in question.  Quite a lot of rocks! and the route goes straight through the middle of them!

Well actually it was not that bad and as I said, I would not have attempted this but someone gave me waypoints back in 2014 and assured me it was fine.  We made it through twice in 2014 and had a terrific sail though that area again this week.  Yes there are rocks....its generally 12-16 ft deep....and most look to have clearance.  The odd one has you worried.  We made the 50 or so miles from Highborne Cay to Royal Island and anchored in the well protected natural harbour there.  After a night, we moved on to Spanish Wells.  I can't give you one specific reason, but I just like this quaint, quiet little town.  The marina - Yacht Haven is now finished and we had a great stay.  A little pricey at $2.50/ft.  but that has become the new norm in the Bahamas.  They have a great restaurant and nice pool, and very friendly staff.

Today, we took on the challenge of the Devil's Backbone; known as perhaps one of the most 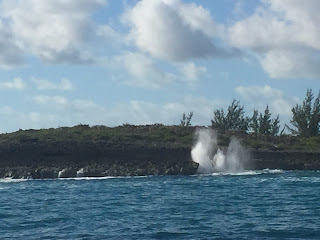 notoriously tricky passages in the Bahamas.  We hired the services of a local pilot "Bandit" and took 3 sailboats through the passage.  To be honest- - it didn't seem too bad and I think we could have done it alone.  However, the warnings on the Charts are enough to make you think that a pilot is definitely warranted.  We were also very fortunate to have excellent and calm weather.  I am sure its a different story in challenging seas, at the wrong state of the tide etc!  Anyway, Bandit did a great job - we negotiated a discounted rate for 3 boats and were joined of course by TraSea and also OnY' Va - new Canadian friends we met in Spanish Wells.

The passage through the backbone was very uneventful, but definitely scenic.  And this passage brings one through to the beautiful "Harbour Island" on North Eleuthera.  We had been told about a wonderful anchorage just north of Harbour island, inside the Devils Backbone called Man Island, so we decided to check it out.  Very glad to do so as this turned out to be a wonderful spot with great beach and access to the Atlantic Side of the island.  I have included a screenshot of the chart location.
We have spent the last two nights here and thoroughly enjoyed the peace and calm.  Although you can see through to the Atlantic there is no roll or swell here - its just an amazing spot - perhaps one of the best anchorages so far on this trip.  so thank you to Leslie and Ralph on "S/V Now and Zen" for sharing this spot with us!

We are headed in to the marina at Ramora Bay today as we are picking up friends Dave and Tracy tomorrow.  Since things are quiet up here, we negotiated a discount rate with the marina - not quite as good a deal as Leslie and Ralph apparently got.......but not bad at $1/ft/day.  Definitely our best deal since Bimini.  We are looking forward to exploring Dunmore Town on Harbor Island later today.......and we will be cooking lobster for dinner - purchased from local divers yesterday at $10 each.

The plan from here is to head to the Abacos - likely Little Harbor.  Hoping that the great weather we have been enjoying the past few days will last for this next 50 mile leg.

Check out our current location at:
https://share.garmin.com/Midnightsunii
Posted by Neil at 6:22 AM No comments:

So - the one great thing about cruising is that you can change the plan at any time right.....well we may be about to do that.  our original plan was to go south through the Exumas, then either continue on to the BVI or head across the south coast of Cuba to Mexico.  Well Mexico seems to be on the list, but the passage on the south coast looks difficult.  Difficult is that there is no place to stop until you get past Guantanamo.....and we have Salty with us who needs shore stops.  Hmmm....we have been thinking about this challenge for a while and we are now considering a change of plan.  We are actually headed north right now to the Abacos, and the thought is then to hop back to the US, then down to Veradero, Cuba ..........north coast of Cuba to Mexico.  We shall see.....one day at a time!

So we have now made it down the Exuma Chain to Georgetown, and are headed up to the Abacos.  The Exumas have been beautiful and we have enjoyed it despite a stream of cold fronts hitting us one after another.  Since my last post, we went to the 5F Festival at Little Farmers Cay and saw the Bahamian class C boats race.  We entered the Cruisers Race on TraSea and were the firs monohull to finish!!


There was a great party hosted by Little Farmer's Yacht Club with free dinner and drinks for participants. Everyone was asked to make a donation to the local school and church.  It was a fun event!

After the 5F festival, I have to say that one of the highlights of the trip was a day visit to Pipe Cay and Pipe Creek.  The waters there were unbelievably crystal clar and the blues and greens just amazingly beautiful.  Photos simply do not do it justice ......but it is a sight to be seeen.

Sadly, we said a temporary farewell to Rick and Juli here.  They have some boat and medical issues to attend to so have decided to head to Georgetown as we venture north.  We hope we will catch back up with them in a month or so.

We did run into another Pensacola boat yesterday - Kimberley on Sustenance II.  She is a friend of our good friend Brian, and we happened to find her a couple of boats away from us in the anchorage at Norman's Cay.  Small world!

While at Staniel Cay, we also caught up with good friend Rivers Brink on her amazing Chesapeake Ketch.  It was cool to hear about her somewhat eventful trip so far.  She had to fix a spreader bar with duct tape while in Bimini! 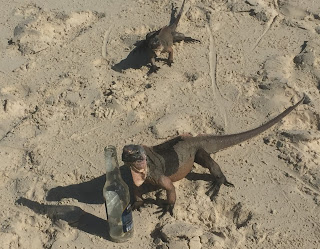 After an overnight stop at Norman's, we headed north to Allen Cay to see the Iguanas.  Hmmm.....creepy little things! and they were very curious about us.  We day anchored then exited to the north side of Highborne Cay for the night.  Its a beautiful anchorage, but it does tend to get a bit rolly! - even in pretty settled weather.  So, tonight we splurged and got a slip at Highborne Marina and dinner at Exuma!