Northern Abaco and Back to USA

Its been 4 months now on the boat and we have seen some beautiful parts of the Bahamas, but at the same time we have been astounded at the amount of trash on the beaches - plastic, plastic, plastic! - everywhere and especially on the Atlantic beaches.  It is so so saddening.  Yes, we saw plastic on the beach in 2014, but not to this extent.  It has become a major issue and I don't know how it will get resolved. 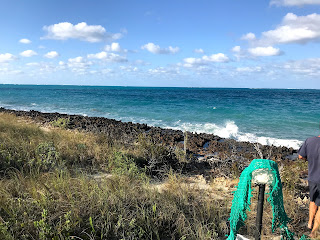 But back to the bright side......our trip back to the US took us back to the Green Turtle Cay area, but this time we anchored at Manjack Cay and really enjoyed the time there.  Here once more, we sat out a modest "blow" but the area was pretty protected.  We stayed a couple of nights and took the walk across to the Atlantic side of the island.

From Manjack, and after the blow, we sailed a short hop to Pensacola  and Allans Cay making a short stop at the almost deserted Spanish Cay for fuel.  Spanish Cay has a large marina - but not a boat in the harbour.  Charging $3/ft per night will do that!  Apparently, they make their money off the sport fishing boats later in the season.  So onwards we went to Pensacola and Allans Cay.  The 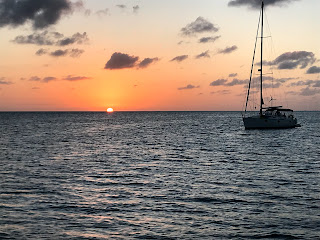 anchorage we chose was on the  bank side and I guess technically that is Allans Cay.  It was a nice protected anchorage and there were a few boats already here.  We had heard about a "signing tree" on the atlantic side, and had already recovered an abandoned life ring for use at the signing tree. 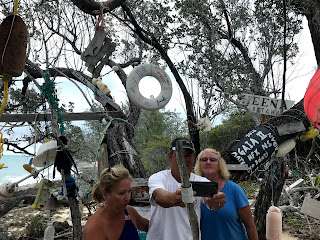 What's a signing tree - I am glad you asked!  Simply a tree where you hand a sign with the name of your boat.  ideally you are creative and make the sign from driftwood or other items found locally.  I guess in a way, it may help contribute to cleaning up these beaches of some of the trash if you can use that......and that is what we did.  We had recovered an old life ring from a nearby beach.

So we set off on a trek to find the signing tree.  The trail starts in the bank side of the island at a "structure" where some joker had placed a Walmart parking sign.  We followed the trail which was marked by plastic debris that had been decorated and hung in trees.  Well at least it had been put to some use!  Once on the other side, we found what must have been several generations of "signing trees", with signs dating back about 10 years.  Some boats had left signs on consecutive years recording multiple visits to the island.  I must admit it was pretty cool!  also pretty cool looking for boat names and people we had met along our way.  We found the perfect spot for our ring and Larry wend tree-climbing to get it in the spot.  one side decorated by Midnight Sun's artist - Janet; the other decorated by TraSea's art director, Tracy!

Our side  has boat name, crew, and yacht clubs - Pensacola and Point of course!, and similar information on TraSea's side.  I wonder how long it will last?

From Pensacola Cay, we started the trip back to the US in earnest.  our next stop was a quick overnight at Great Sale Cay.  This is a good overnight stopping point when crossing the Little Bahama Bank, but there's not a lot there, the beach is small and not too interesting, so it was just a short stop.

From Great Sale, we moved on to the Marina at West End, named old Bahama Bay.  I had stopped here in 2014 on our first trip to the Bahamas.  This time, the marina was much busier and I believe they have added some nice houses and condos to provide accommodations for guests.

It was our last night in the Bahamas as we planned to cross back to the US the next day, headed for West Palm Beach.  I must say, I was sad to leave.
Posted by Neil at 7:25 AM 1 comment:

Lazy Sailing and Meeting Friends in the Abaco

In terms of length of sails - we have certainly slowed down in order to enjoy our time in the Sea of Abaco.  For the past few weeks, 10
miles in a day has been a big day........and do we really need the "main"......when we can go almost as fast and more comfortably on Jib alone?  Wow - are we sailing lazily or have we just become real cruisers?  either way, I have to say its not a bad thing when we get totally off a schedule and don't worry about making 50+ miles in a day. 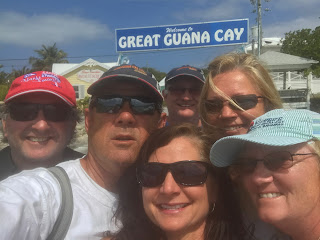 We have had the great fortune to be able to catch up with friends in the last couple of weeks,  First off, we were joined for a week by great friends Ron and Julie from PYC.  We enjoyed sailing with them and enjoying some of the areas we had already seen in the Abaco together with some spots that were new to us all. 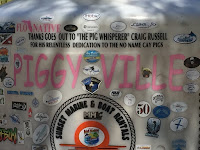 We visited Noname Cay to see the Abaco version of the swimming pigs!  Wow seems like everyone is trying to copy the success of the Exumas famous swimming pigs at Big Major's Spot.  Well it seems to be working out - there is a beach with a bunch of little pigs and mamma pigs running around.  They did seem less aggressive than their Big Major counterparts, and have not quite figured out how to beg for food.....or well....even how to swim.

Piggyville!  Really????  Some farmer has got a good thing going.....tourist fatten up the pigs for free! 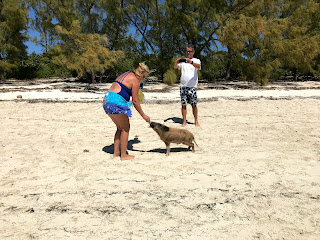 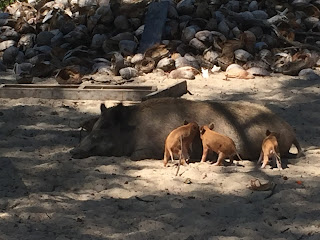 We were also able to meet old friends from our last Bahamas trip here at Noname.  We had arranged to meet up with Jason and Kelly from "Sailing Chance" with their new crew member Zoe.  it was so great to be able to catch up with them.  Jason and Kelly live in New York on their boat now, but we met them and buddy-boated with them in 2014 for the passage down to Spanish Wells.  incidentally, they have a great blog at www.Sailingchance.com.

So, during the week with Ron and Julie, we were able to take them to Green Turtle Cay, Nippers, Treasure Cay, Noname Cay, Hopetown, Marsh Harbour, and Tahiti Beach - not bad for a week of easy sailing.  And we were able to spend a day with Jason, Kelly, Zoe, and their friend Taylor at Snake Cay.  Now that is an interesting spot - with a beautiful mangrove river ride (by dinghy), its a pretty well protected anchorage from west and north winds and a small beach where we could take Salty.  We had a great day here exploring the mangroves and walking the beach.  We saw some huge Rays in the deep hole that forms the entrance to Snake River.  in fact one brave sailboat made it in to the mouth of the river and anchored for the night.  Not a whole lot of space but great protection in there!

So from here we headed south one more time to Pete's Pub and hoping to do a dinghy ride to the nearby blue hole.  Unfortunately we were not able to catch a free mooring ball, so ended up anchoring at Lynyard Cay........but that's not a bad spot.  We had hoped to meet up with friends Tom and Christie, but unfortunately we were not able to make that happen.  Oh well - next time!

After that, we started to head north, starting the trip back to the US......more on that in the next post. 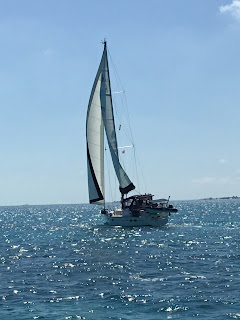