This was a short but new adventure and we discovered a great new anchorage for us - so I thought I would share the details with anyone that may be interested.

We had spent the weekend in one of our regular and favorite locations, Ft. McCree, adjacent to Pensacola inlet.  We had to go home for a little of that 4-letter word.......W@@K, but since I am now semi-retired and working less hours (at least in theory), we should make time for a cruise - right?  Well that is why I cut my working hours (and salary) in half).  Talking to our best friends Larry and Tracy - they were planning to head back to Atlanta and in Larry's words he had a large dose of the "I don't want to's".  So it took no persuading them to join us on this little impromptu jaunt on thier boat S/V TraSea.  Fist stop  - home, to fulfill a couple of commitments, re-provision, top off water and fuel etc.

Given the wind direction, we decided to go "inside" or via the ICW.  First stop - a very short hop to Ingram's Bayou.  And I mean a short stop - just a couple of miles west, but at least we were off the dock.  We anchored and ate dinner at restaurant under new ownership - GT's on the Bay.....a great improvement over the former "Cayman Grill" and a moderate dinghy ride from Ingrams.  The food was good - so a thumbs up for GTs! http://gtsonthebay.com/.  So stop there and support them if you have a chance.  They have a long dock into the bay - but its looked like about 4 ft draft.  But they have excellent dinghy docks.

The next day, with a reasonably early start, we headed west on the ICW towards Mobile Bay.  Amazingly, this was the furthest we had sailed west - we ALWAYS go East.  The ICW trip was fairly interesting.  We did hit the bottom once on the north side, just about a mile west of the Wharf.  That was a surprise, but a soft sandy hit at low speed - so a little more care for the remainder of the trip. 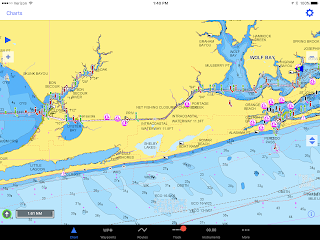 We exited the ICW into Mobile Bay and continued west on the marked ICW channel.  Depths in the channel were fine but the charts were showing about 7-8 ft just outside.  The bay was flat calm and the pop-up storms stayed away.  I could not help but recall the tragic Dauphin Island Race (April 25, 2015)  - from just a couple of years earlier.  Thoughts went out to those that lost their lives on that tragic day, and it served as a reminder that the Gulf and local bays must be treated with respect and care.  As an aside, if you are interested in an account of the Dauphin Island Race tragedy, please see this link - it provides an excellent account of things. Dauphin Island Race.

After intercepting the Ship Channel, we headed south for a short distance until we were between makers Green 15 and Green 13 in the main ship channel.  Caution and a good look-out is essential as the ship channel is narrow and quite heavily trafficked by a variety of cargo ships.  Also look out for the ferry which crosses between Ft. morgan and Dauphin Island . 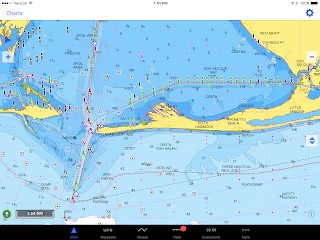 Anyway, from our mark on the ship channel, we then turned WNW carefully crossing the shoal areas shown on the chart.  Note - the marked depths were as low as 2.4 ft, but Active Captain said it was typically 12 ft.  We crossed the area cautiously and without issue seeing no less than 11-12 ft.(at close to high tide).  We then headed for the anchorage tucked in the corner of Dauphin Island and Pelican Island.  Apparently, Pelican Island shifts regularly based on currents, storms etc., but at the time we were there it provided a great anchorage protected from the waves on almost all sides.  Some people had reported "rolly" conditions in there, but it was flat calm for us with winds coming out of the SW.  Here's a larger blow-up of the chart.  Hopefully this is legible and you can see our track in. 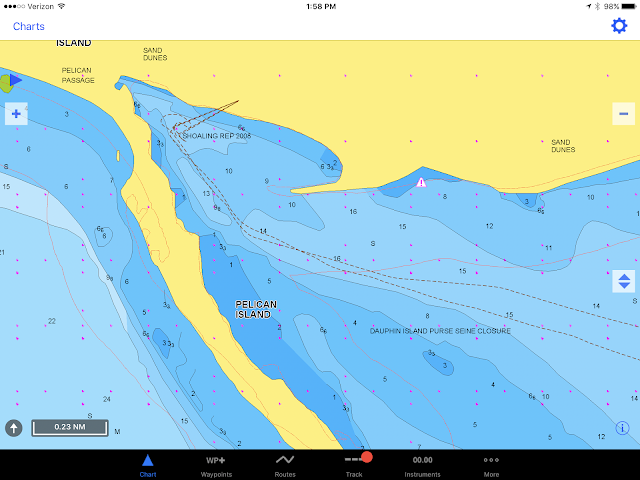 The depths in the center were generally 10-12 ft, with a sandy bottom that seemed to provide very good holding.  The dunes on Pelican were pretty small, so wind protection in a blow could be an issue.  Waves should be no problem in anything but an E wind - and even then, there are couple of sand fingers that you could tuck in behind.

In the anchorage and we were pleasantly surprised by the water quality, relatively clean beaches, excellent wildlife.....and wait for it, a Pub!  Yes, Pirates Bar is on the south shore of dauphin Island with easy access by dinghy.  The food was good. The place is definitely "vintage 1960s", but friendly staff, reasonable prices, and dog friendly (in the outside area).  They also have a pool, but we did not check it out.  Apparently you can use the pool for a daily charge of $6. 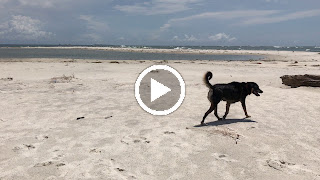 Salty had a blast running on the deserted beaches of Pelican island and swimming in the surf.  This really is a great spot to visit and apparently not too many stop by this way.  I think the reason is largely due to two things: (i)  the need to cross Mobile Bay; and (ii) the waters in the Mobile Bay area are typically more brown due to upland runoff when compared to the coastline of Pensacola/Orange Beach and areas east. 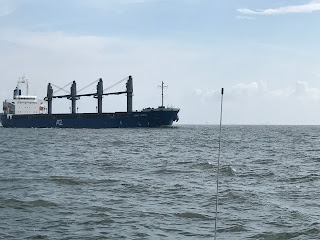 We stayed a couple of nights and then returned to Pensacola.  With winds (light) out of the SW, it was a great opportunity to sail on the outside (Gulf) back to Pensacola Pass.  We re-traced our track back to the ship channel, headed a little further south before striking east towards Pensacola.  Again - care and a careful lookout for shipping! 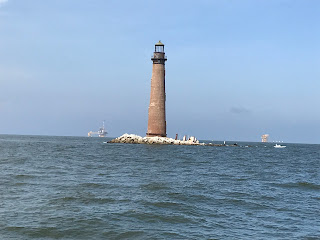 We got a great view of Sand island Light and the many oil and gas platforms, wellheads etc. in the gulf and entrance to Mobile Bay.  Again - care needed.  Surprisingly not everything is marked on the charts.

The trip back started as a "motor-sail", but the wind built and it turned into a great sail back with the winds building from our rear quarter, we hit 7-8 kts under sail.......and without spilling a drop of my drink! 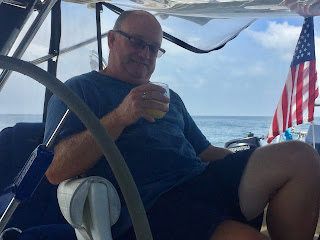 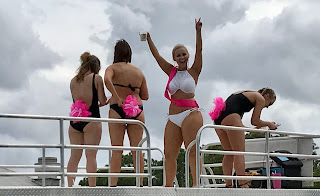 Actually, the Fast Women Race is a sailing race hosted by Point Yacht Club, Josephine, AL.  The race is held annually on Perdido Bay and is the last in a trilogy of races (Roses, Bikini, and Fast Women)   on the Gulf Coast which are held during the summer and count towards earning the Overall Women’s Sailing Trilogy Trophy.

After some doubts about the weather.......our forecast from the previous day was for storms with wind gusts up to 30 kts, race committee decided to go ahead.  While it was overcast, the storms were not materializing and the winds were pretty steady in the teens.  Janet was invited to crew on Hula Girl - a wonderful Sabre 42 owned and John and Jody Horner.  The race was a great success.  Well enough about me writing about it.

Watch the video!  Click on the link below..  Sorry if you live in France or some of its island derivatives.....the copyright people have blocked the video in some countries because I used some copyright music! - oh well...my bad!  And thank you girls from Florabama for posing!