Well all good things come to an end, but its more important to think of them as just the start of a new chapter I think.  I am going to group our last legs as one since we have made this trip numerous times now, and this one was perhaps the quickest Gulf Crossing, at least in terms of time.

We were ona  schedule - yes, something we try never to do - but it was a schedule with some float in it.  Nonetheless, we were trying to get back in time to surprise oldest daughter Helen on her 30th birthday (May 2).  Helen has done so much for us on this and other trip - she truly is "land support".  If we need anything doing while at sea - an inReach message goes to Helen and we get an immediate response.  She pays critical bills for us, dog sits when needed......the list is  just too long to recount.  So being there on her special day was an important consideration.

Than in mind, we were planning a quick crossing of the gulf missing out a number of the yacht club stops that we typically make.  Our route ended up being:


All of these were "day sails" with the exception of #3 which included two nights at sea.  Unfortunately, this longer leg was almost void of favourable wind, so we did a lot of motoring.  But here are some notes on a couple of places from this leg relative to places we have not stayed previously. 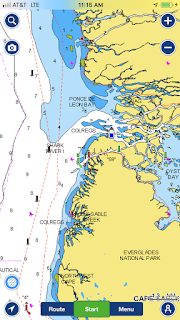 We have often thought about making a stop here, but have been put off as we had our dog Salty with us and were told there is no place to land with a dog.  Well, I can confirm this to be true - it is certainly up there in the mangroves, but a beautiful stop - located just north of Cape Sable.

We were anchored by mid afternoon and this gave time for some dinghy exploring.  We went several miles back into the everglades adn it was truly beautiful.

We did however, make an exit back to the boat before sunset for fear of the reported bugs!  Thankfully, they were not too bad.  Except that the following morning I had to sweep hundreds of love-bug type insects off the underside of the cockpit roof -they were very lethargic and not up for moving.  The good thing was they didn't really get into the boat through the screens.  No-see-ems were thankfully not a problem (April 2019).

I can confirm for any pet owners that we did not see a place where it would be possible to land Fido.  In the past, we have only been able to do this at Cape Sable on the beach - but watch out for the saltwater crocodiles!  (see a previous post of mine on that!)

We had not planned on a stop in Destin, but a line of storms was accompanying a front seemed due to hit Pensacola about the time of our arrival.  We had a choice to make - St. Andrews or Destin.  I really didn't want to have a bad storm experience on the way in to our home port, Pensacola!  We picked Destin - on our last trip in there, the entrance had been vastly improved and this was the deciding factor.  Destin is not easy in bad weather - the entrance is in my mind confusing and often the inlet shoals and moves around.  But as stated, last time about a year ago, this had been dredged and improved.

We came in as the storm started to hit.  Thankfully the winds died but the rain came on.  We made it in no problem, an dropped the hook in the harbor as 20 kt winds hit - just in time!  We stayed aboard and did not leave the boat that night, ready for a reasonably early departure the next day.

What a wonderful sail home!  We had about 188 kts on the beam, and MS3 liked it!  We were making in the high 7s most of the way to Pensacola pass. 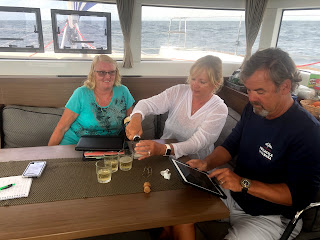 As we arrived - we of course had arrival champagne, and watched our trip counter turn over mile 7,100 as we lined up in the Pensacola inlet for the entrance to the ICW.

Our timing was great - we were greeted on the VHF by friends from Pensacola YC that had spotted us on AIS.

So we joined the raft-up in Ft. McRee - one of our favorite anchorages.

Isn't that What Moitessier said?

It was tempting not to go home......almost there.  I could not help thinking about the story of Bernard Moitessier, a famous French sailor that should have won the 1968 Sunday Times Golden Globe Race - the first non-stop, single handed around the world yacht race. Instead of finishing the race in England, he elected to continue on to Tahiti.  Now, I'm not saying I had the urge to continue on several thousand more miles, but there was a strange call of the seas to continue on rather than end this voyage.  I must say, its a strange feeling. 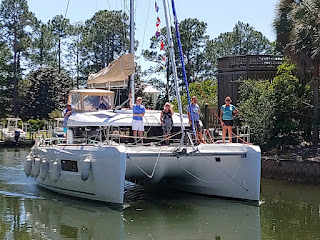 But still, arriving home is still a good feeling!  And yes, the,new boat did fit in the entrance of the canal and in its slip - phew.......that would have been a long trip to find I could not get it home!

What's next?  I don't know.  Some local things for sure, but after that......still considering.  Watch this space!