The Next Trip - Isla Mujeres?

Finally!....yes finally we are back in the water and on the water.  Midnight Sun made it home and has made a couple of sea trials now.  She came home at about 95% completion.  Rigging replaced, electronics mostly working, new sails etc.  The canvas and stack pack were not installed, but that doesn't stop her from sailing.  Here she is in Perdido Bay, almost home! 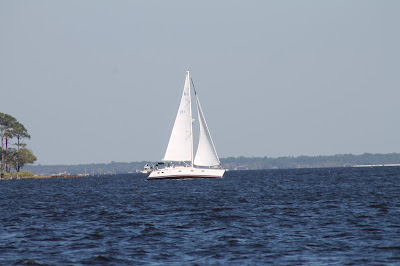 On the trip home, it was blowing in the high teens to low 20's so it gave her a little stretch out.  I think we had a couple of wraps on the jib here.  She has since made a trip to PYC for the Blessing of the Fleet - yes, we are not taking any chances, and will take a blessing when it is offered......we need it!  And wouldn't you know it - the day of the blessing, we motored all the way there with the wind at 30 on our nose.  And when we set off to return, the wind died!.....but that's sailing :)

She sails well, but the new configuration of lines, electric winch etc., will take a little getting used to. The cut of the new jib is considerably different than the old sail which has been modified at some point to be a "cruising jib".  With the new sail being closer to the original spec, I got a strong first impression that we now have a much better cut, with more sail area, lower center of force, and better power in light air.  Anyway she performed well.


So now it is time for our next adventure!  Isla Mujeres, Mexico.

Well that is the plan - in fact we have been planning it for months, and hoping the boat will be ready.  I am pretty sure it will be by now - in fact, it had better be as we are hoping to push off the first week of May, and that is just over a week away.......Geez!  so much to do!

When we stareed to think about this last year, we had planned to do the Pensacola to Isla race (see http://www.regataalsol.org/) but unfortunately the race dates conflict with Austin's graduation.  So we have decided to go ahead of the race and fly back for the "Austin Event of the Year", then return and cruise back........basically taking May and a good part of June to do the trip.  Well that is the plan, and it is starting to come together.  I hope to do and update on all of that next week as hopefully some of the final pieces come together.

In the last week, the new canvas has been installed, the stack pack went on yesterday, new traveler.....so I think  we are at 98% complete now.  I know of a few more jobs that I need to complete, and a boat is a boat - so its never at 100% complete or 100% ready!