Our voyage continued south from Wrightsville Beach.  We saw what looked like a weather improvement in the afternoon of Sunday November 31.  Ok, it was Halloween and we should have known better right?  Remembering back to November 31, 2015 when we were dismasted in the 2015 Pensacola to Cuba Race on our previous boat "Midnight Sun II" - yes, I should have known better than to tempt fate again.

But that's an aside to todays post - no we were not dismasted, thankfully.  I can say been there, done that, and I don't need another T-shirt.  The sail started out very ralaxed....then too relaxed as we had to motor, then - yes the wind blew and the seas got bigger - reminding us all of the same night in 2015.  We had winds in the mid 20s, gusting to near 30, clocking (of course) in front of the beam; seas quartering, building to 6-8 ft.  Arghh.... and we had promised the girls it wouldn't be like that - but here we were again.  But I'm happy to say, SV TraSea handled it in her stride, even if her stride was rather heeled and bumpy.  The good thing was that we were fast!  and we made it to Georgetown in great time.  We saw several boats coming out of the pass being tossed around quite badly as wind was against tide.  But once we made it through the inlet, we had a leisurely motor up the river to get to Georgetown. 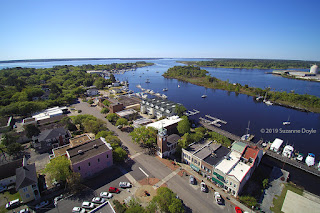 Georgetown is another sleepy town on the South Carolina Coast that I had actually visited several times on business several years earlier.

It has a wonderful "Harborwalk" with several bars and restaurants  - but it was Monday and most were closed.  However, we did find a place to have lunch, later a beer, and a great meal at an Italian Restaurant called Alfresco Bistro on Front Street. 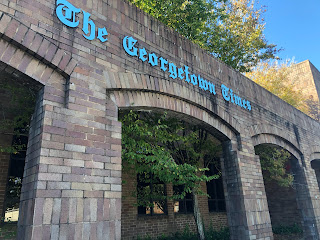 It was a short stop-over of one night, but we met some nice cruisers - even if they were on powerboats! We headed out the following morning bound for Charleston, SC

We arrived into Charleston Harbor as the sun was setting.  Charleston harbor is wide open with no real protected anchorages, so in anticipation of approaching weather, we found the best spot we could find just off the South Channel Range.  We had been calling the few marinas that we could get to (due to bridge heights, and were wait-listed.  I guess all spots had filled as others saw the weather approaching.  We were on a wait list at several places, but none seemed to be freeing up.  We sat at anchor the following day, as we didn't see an easy way to get into town.

We saw a number of other boats that seemed to have the same idea with several others anchoring near us.  While there was an anchorage near the marina with better city access, we had heard that many cruisers had issues with anchors fouling and had needed to hire a diver to retrieve them.  So we didn't risk it.

The following day (Thursday) , the weather didn't seem much different.  It had deteriorated a bit, but not terribly.  So we discussed our options - stay put and maybe see if a marina would open up; or poke our nose out of the harbor and see if we could continue on south, without too much discomfort.  We decide on  the latter.

Moving on to Edisto Beach, SC

We got underway mid morning after checking the weather and options.  Looking ahead at the weather for Saturday and Sunday, we needed something protected!  - see screenshot from windy.com

We had some entertainment leaving the harbor - two container ships passing in the main channel and a sailboat nonchalantly ambling along in the path of both!  What was he doing?  Each ship and the pilots were trying to contact him on VHF, and each ship was giving him 5 horn blasts indicating danger.  Finally the guy answered and he was royally chewed out by the pilots.  And rightfully so!  He finally changed course and narrowly missed being in the news!  I have no idea what he was doing or thinking to get into that situation.

Anyway, when we poked our nose out in to the Atlantic, things actually seemed better than predicted.  We were sailing downwind; seas were probably 4-6 ft. but quartering -  so not bad at all.   We made good time, called ahead to a small marina at Edisto Beach and got a spot.

We arrived mid afternoon and had an easy passage into Edisto Beach.  Depths were deeper than shown on the charts and we had at least 20 ft. of water (at low tide) even into the marina.  The marina is small and friendly and in great condition with floating docks.  It's reasonably protected - at least as well protected as it gets in the Low Country of South Carolina.  Looking at the weather, its looking like we will be here until Monday (Nov 8, 2021).