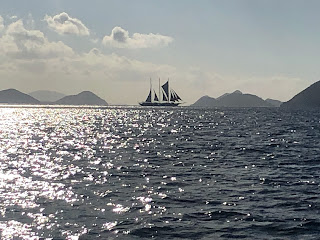 After checking out of the BVI, we  made a short hop to Christmas Island where we anchored before setting off on the next leg of our trip - starting the trek home! It was a nice feeling.......while we love the BVI, it feels good to be getting back to "real cruising" rather than the morning rush for mooring balls at the better bars and playing "dodgem" with the Credit Card Captains - which for the record, seem to be getting worse!....I can't believe some of the charter companies entrust boats to people that:  can't dock the boat; raise sails correctly; and anchor with running lights and every other light know to man turned on!.......but they obviously do!  OMG we saw some near disasters - especially with boats attempting to dock at Leverick Bay on a breezy day.  It was very eye-opening.  Now I am not knocking credit card captains - having been there myself  (well maybe I am) - just seems the charter companies are keen for business and letting the standards of seamanship needed suffer.

But back to the trip.  We had excellent pizza from the famous "Pizza Pi" in Christmas Cove.  I am not sure how they make such great pizza on a boat - but hats off to them, it was excellent!  https://www.pizza-pi.com/

The next morning we headed out to Vieques.  A short 30-35 mile sail, but the winds died and we ended up motor-sailing.  Still it was a nice easy passage.  We anchored in a nice wide bay with 2 other boats in Ensenada Sun Bay.  The bottom was grassy but we held well.  One boat next to us drug anchor.....but it turned out they had hardly any chain out.  This seemed to be in a state park area, but being Sunday most things seemed closed, so we stayed on the boat.

On the way, we were able to help a turtle in distress.   I have some video of the adventure and will try to put it together and insert - it was a very satisfying little addition to the trip to help out one of these wonderful sea creatures.

The next morning we had a brisk sail to Puerto Rico - winds 18-25, with pretty healthy swells  made for a fast sail.  We again anchored for the night at Puerto Patillas and this time we checked in using the CBP Roam app, which made immigration and customs clearance a breeze.......but I am still not sure why you need to check in from the USVI to the US Puerto Rico?  Even the government weren't sure if we needed to!

The following day - light wind, so we motor-sailed to Ponce going though the mangrove islands at Boca del Inferno, with a stop at the Ponce Yacht and Fishing Club.  This turned out to be a nice place, but we could only get an overnight spot on the fuel dock.......which was a bit rolly due to swell.

Then on to Gilligan's Island - a wonderful anchorage, that we thoroughly enjoyed........but it gets better, we then moved on to Puerto Real and found what has to be one o the most friendly towns and marinas we have visited so far.  Marina Pescaria has to be the best!!  Quaint fishing town marina, friendly staff, helpful CBP personnel......and a great bar.  What more could you ask for? 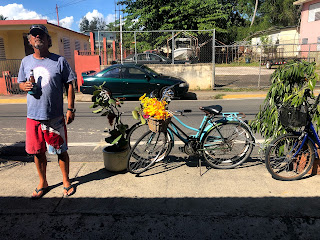 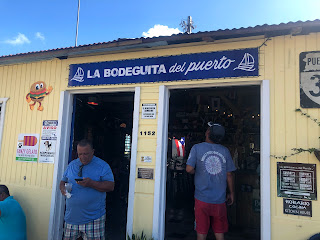 Waiting in the BVI 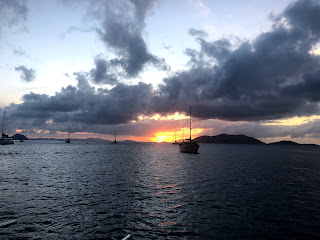 We are currently waiting in the BVI on a couple of warranty parts and minor issues on the boat to be fixed.  We have decided (for a variety of reasons) to return with the boat to the US.  Our plan is to hopefully leave next week.  The most critical item we were waiting on is a replacement AIS unit - and that was replaced yesterday!  Apparently, the factory installation wired it incorrectly (input and output switched), and while we thought it was working correctly.......it was not.  We could see ships and vessels at close range, but we were not being seen.  Similarly, our VHF was not working at full range.  We believe the splitter and AIS have been damaged as a result of incorrect wiring......not exactly ideal for crossing the Atlantic, but fortunately, there is not a lot of shipping in that area.

Anyway, that aside and a few other remaining items, we are hoping to be on our way east next week.  our plan is to head towards Puerto Rico, possibly the DR or Turks and Caicos, then up into the Bahamas and back to Florida.  So its time to start route planning and weather watching! 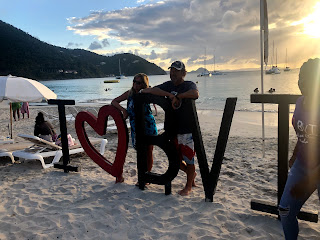 While it sucks to be delayed and waiting on parts.........there are worse places in the world to be stuck! 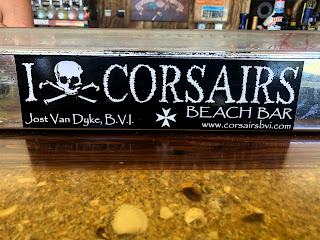 Time in the BVI

After arriving in the BVI and the usual check-in process, we decided to stay at Virgin Gorda Yacht Harbor for a night.  We had been in contact with Dream Yacht Charters, our brokers for the boat and soon to be yacht management company.  In fact, we have been in very regular contact with them since leaving France, trying to get "punchlist" items resolved.  We fully expected that they would be ready for us, and ably to quickly resolve things for us.  However, this does not seem to be the case.  i will reserve further comment on this issue until we have some resolution.

So while we wait, we have taken a couple of days to re-visit some of our favorite BVI haunts and see how they look "post-Irma". 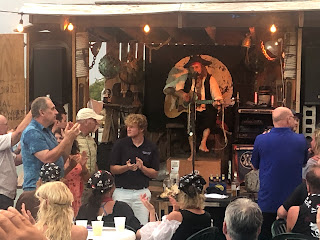 We spent a night on the dock at Leverick bay in some quite "blustery conditions" - definitely not the ideal place to be.  However, things around the dock were pretty much back to normal and up and running.  Michael Bean is still doing his pirate show at the beach bar etc.  and it was fun to join his ever-corny Pirate jokes and songs.
The r0um was flowing and the crowd had a good time.

Our very own Captain Ron was called upon to blow the Conch and his years of trumpet-playing paid off with an impressive and long note.

The  next morning we moved on, being glad to get off the dock.  We decided to take a trip around the area of the Bitter End and Saba Rock.  OMG - the landscape has changed.  I thought I had taken pictures, but there was really nothing to see!   The Bitter end resort area is gone - really gone.  I guess they have moved ,pst rubble and remains, because it has simply gone.  Saba rock had a crane on a barge working on recovery.  There were some shells of the structures, but that was about it.  As we left, we came across a couple of familiar boats anchred in the Bay.  New friends on "One Life" that recently completed the ARC, adn we also saw S/V Distant Shores III - famed by the TV sailing/travel program called Distant Shores. 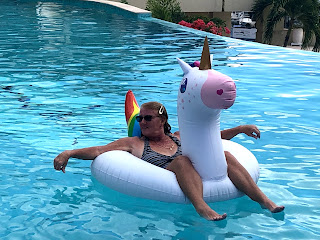 We headed back to Scrub Island - the base location for DYC and spent the night on their dock.  Unfortunately, and despite scheduling time to see them, they were "too busy" to  do anything but visually look at our punchlist issues.  As I stated previously, I will reserve further comment until later.  The next morning, we headed over to Jost Van Dyke, staying in Little Harbor.

We had head that Sydney's Peace and Love would not be re-opening, but are very happy to report that both Sydneys and Harris's are back up and running, with Strawberry (owner of Sydney's) and Cynthia (owner of Harris's), both in full spirit and seemingly doing well.  This was just great to see and I am sure it has taken them a lot of effort to get back to this stage.

We have just made a quick trip to the USVI - Christmas Bay for a crew transfer.  We met new friends Joe and Mandy on SV Kuma Too out of Dunedin, Fl.  They were looking for crew to take their boat home with them, adn Austin volunteered.  This will be a great experience for him to sail a different boat (47 ft Leopard) and work with other sailors.  So last night we made the transfer, being sad to see him leave us, but happy that he gets a new experience.  I am sure he is ready to spend some time with people closer to his age.  See you soon Autin - miss you already!