I am going to try to keep the posts about South FL brief as we have been to most of these areas several times in the past and if anyone needs more info, look back on our previous cruises.  We arrived in Naples yesterday after a short motor from Ft. Myers.  First time we had been to Ft. Myers and I must say the place was fair hopping for this time of year.

So let me back up a bit - its so easy to get out of sync when I don't write every day!  We were last in Venice.  Our route took us from Venice to Charlotte Harobor where we ducked on the inside to find an anchorage for the night.  We were thinking about staying near Cayo Costa and had heard of a great anchorage in Pelican Bay.  I think we could have got in there fine, but one of the boats traveling with un, Navigo, draws 6 ft. and that might be tight.  So we elected to go a little south on the ICW and this turned out to be a great decision.  We dropped the hook at Cabbage Key after consulting with Bob Kriegel on the anchorage location.  It was actually pretty easy to find being just off the ICW channel (east side) near the private channel entrance to Cabbage Key, against Useppa Island.


This was our our first time stopping here, despite having passed through this area in 2014.  So if you get to this area on a boat, check it out - a wonderful little spot.  The restaurant was delightful.  Excellent food, excellent service.  We had a shared dish of stone crab claws and shrimp.  Delicious!

The atmosphere in the bar/restaurant was great, with dollar bills on the walls and just a great "Hemingway" feel to the place.  Definitely worth a stop over or even renting a cottage here.  So far, this has been one of our favorite stops.  But onwards, it was just for one night.  Our next stop was Ft. Myers Beach.  We hadn't intended to stop here, but we were searching for an anchorage around Sanibel, and just didn't find much protection, so we headed into Ft. Myers Beach for fuel, water (Diversified Marine) and a look at anchorages.  We ended up in the mooring field ($18), which was quite a good spot.  Took in a quick look at Ft. Myers Beach- definitely set up for the snowbirds, and surprisingly some younger folks - likely as school is out for Christmas.  We did get a great happy hour meal deal  at the Yucatan - $9 for ribs or pot roast - great food and great price.  However, I was concerned that eating so early, Janet's hair may turn purple!!

Now - we had exceptionally low tides the following morning.  Midnight Sun and TraSea got our despite hitting something on the bottom - suspect it was a foundation to the mooring - ouch!

Navigo had to wait a couple hours for the tide - but that was ok, as we planned a short motor to Naples (no wind), with a 2-night plan for Naples.

There are some amazing boats in Naples YC - mainly high dollar stink-pots, but look at this hand-built sailboat! 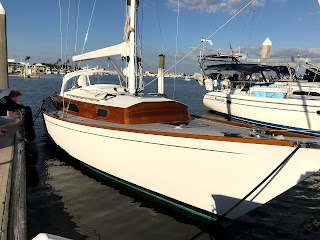 Where in the world is Midnight Sun II

Check out our real-time location at:
https://share.garmin.com/Midnightsunii

Drop us a line at ndaviesgeo@me.com

Midnight Sun II and TraSea left Pirates Cove on Saturday, December 9.  As alway, we were not quite ready, but getting off the dock was an important step!.  The tide was very low; we plowed through the mud on the edge of our slip to make it to the channel, but we were off.  A short hop to Ft. McRee to spend the night and rest.  A very big thanks to Shaun and Casey for helping us get loaded, house sitting and offering to clear way the clutter in the garage from the final projects!  Thanks Guys!!  you are the best!

So, dinner at McRee, and a fairly early start.  We were hoping to catch up to our friends Rick and Julie on Navigo I as they had left the previous Sunday and were holed up in Port St. Joe.


We left Ft. McRee on Sunday morning with a plan to make either Panama City or Port St. Joe.  We sailed and motor sailed some to keep up speed, but based on our progress, we were looking at an early hours arrival in PSJ, so we made the decision to pull in to Panama City.  The day went well and we arrived in PC, after dark, dropping the hook at around 8:30 to 9pm just off the beach at Redfish Point (opposite St. Andrews YC).  Tracy had made an excellent Chilli, and we all had dinner together on TraSea  while pondering the plan for the next day.  We decided on a 6:30 am start, head in at PSJ, going up the canal to the ICW at White City, then motoring on to Apalachicola.  This is exactly what we did, making Apalach just before dark - wow....I even told Larry to slow down as we never seem to arrive anywhere in daylight!

We love Apalachicola, and it was busy with boaters.  We caught up with Navigo - they had taken a slip in Scipio Creek.  As for us - all marinas that could take us were full - its "Looper Season".  We had dinner at "Up the Creek" which turned out to be not only a great choice but about the only choice as it was Monday and many places are closed.  The great thing was that Salty could dine with us.  We later visited the old Bowery - which is now the Ice Company.  Again - dog friendly, and Salty was a hit!

We left Apalachicola late morning and decided to head over to Dog Island.  We were on the tail of a cold front that was moving through so were watching the weather for our crossing of the Big Bend.  Should we leave Tuesday night or wait until Monday?  Hmm...seeing 22-25 kt winds and 6-7 ft seas on the sea buoys in the Gulf helped us make that decision.  By the way, I found that many of the Gulf sea buoys are currently out of action due to hurricane season damage.  It would be a 20-24 hour crossing, so leaving in the morning would give us a morning arrival.  We were convinced.  Midnight Sun and TraSea anchored off the beach at Carabelle rather than Dog Island as the wind was out of the north.  Navigo elected one more night in Apalachicola and an early morning start.

Leaving at 8 am, we had light winds on the beam.  We pointed directly at Clearwater, and settled in for 22 hours.  We started out motor-sailing, but soon cut the engine as the winds built from 8 to 15...then occasionally touched the low 20s.  We were flying at 7.5 kts.  Not bad with the boat fully loaded down.  Seas were a bit rolly, but not too bad.  TraSea at 47 ft, was flying too, making 8.5 and  touching 9.  She passed us at about the half-way point, but we kept her tricolor in sight for all but the last 8 miles or so.  Navigo was behind us by 10-12 miles.  We were able to maintain hourly radio contact, which just feels assuring on an overnight crossing.

We pulled on the dock at Clearwater marina at around 7 am.  Poor Salty, had spent the time in the head - this is his "safe harbor" during crossings.  We needed to get him off the boat as he chooses not to eat or go potty on the crossings.  This was his longest so far and I am absolutely sure he was relieved to "go".  We have been trying to get him to go on the deck of the boat - but that's a long story, and so far, no success.  So, with leg's stretched and bladders relieved, we set off again for Pass-A Grille near Tampa Bay.  We stayed at the Tierre Verde Marina - very reasonable at $1/ft, but few amenities.  Still, the purpose of the stop was to get a rental car and, collect our son Austin from the airport and stock up on the things we had forgotten.

Headed out in the Gulf for a relatively short hop to Venice.  We stayed at Venice YC - very nice, great food!  This was a "free night" stay with our PYC membership (reciprocal agreement).  when I say free - we spent anything we would have saved on a very nice meal at the YC restaurant.  Oh well!   Today we are going to do another 30 miles or so down to Charlotte Harbor and anchor.  Slow but sure, we are making our way south.

Now that we are across the "Big Bend" and truly headed south, the weather is starting to warm up, and it feels like we are headed to the Bahamas!

Where in the World is Midnight Sun II?

For a real-time check on our position, click the link below:
https://share.garmin.com/Midnightsunii

Follow us on our journey south - we would love to hear from you!
ndaviesgeo@me.com

Today we held an impromptu Bon Voyage Party at PYC for all the sailors heading out this week towards the Bahamas.  PYC Boats are: 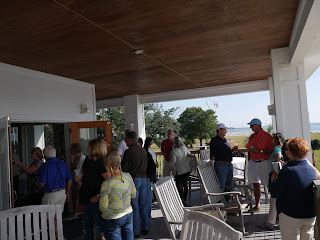 Other non-PYC boats that we hope to see along the way include:
We would like to thank all of our friends from PYC who came to the party today!.  We had a wonderful time and were just blown away (ugh....and we are leaving on a sailboat) by how many folks came out to wish us well.  Thank you to you all!  It was great to see you and very encouraging.  We hope you will follow along.  Moreover, we hope some of our friends will catch up with us and join us along the way.  We would welcome the crew!

Past Commodore Alan McMillan surprised us with an award for our efforts chairing the second Pensacola to Havana Race (May 2017).  Thank you Commodores McMillan and Jim Reeves.  And while on the subject of awards, our friends Larry and Tracy Cost got the prestigious "Boot" award in the 2016 Isla Mujeres Race.time to return that so that it can be awarded again in the next race (2018).  We will miss all of our friends from PYC and Pt.YC, but hope you will follow along, keep in touch and more importantly come see us along the way!


And of course first mate Salty waiting patiently for left-overs! 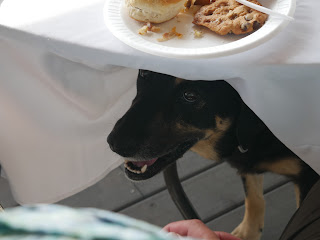