Just a very quick post here to let you know that the Flotilla has started to assemble and we are near ready to go on our next cruise.  Boats planning to leave together are: Midnight Sun II, TraSea, and Navigo II.  We hope to be joined by Pearl along the way.

We are planning to leave for places south on or around December 3.  We will leave from Pensacola and the plan is to head for south Florida, taking our time with multiple stops along route.  Why?  well Salty will be with us and he likes to get off the boat at least once a day.  We also plan to make use of our reciprocal agreements with Florida Yacht Clubs - yes, that means a free night at each yacht club stop. Definitely a great benefit.

From south Florida, we will cross over to the Bahamas - likely Bimini, and then make our way south through the Exumas.  Form that point on, our plans become less firm as we intend to see what the latest news is regarding the state of the Virgin Islands.  We are looking at two choices depending on what we hear: (i) generally follow the Thorny Path to the Virgin Islands; or (ii) cut around the south coast of Cuba heading for Mexico and Belize.

Stay tuned to watch our progress.  I plan to post brief updates on most legs of the trip, and also update our position with DeLorme.

We wish everyone a very Happy Thanksgiving.  We would love to hear from you is you are reading our posts, so either leave a comment or send us an email at ndaviesgeo@me.com


In preparation for the trip, I have been busy with multiple projects on Midnight Sun II, including:
Also, been helping Rivers get the Pearl ready.  My part was installing new stern rails.

What Have We Been Up To?

Again, I find that several months have passed without me writing anything to the Blog.  Its certainly not because of lack of activity - just life got busy! And while we certainly have been doing some local sailing, the focus of activities has been getting the boat ready to go cruising again in December.

Now that does not mean we have not had some great sailing fun.  We certainly have - some fun.....some; well let's say a couple of very great learning experiences.  Oh, and let's throw into the mix a 3-week trip to England .  No not sailing, but we did pend a few nights on England's canal system cruising on a long-boat.  58 ft long and only 6 ft wide!  We had a great time.

The boat was very  comfortable with all the typical boat amenities.  We were on the Leeds-Liverpool Canal between Blackburn and Wigan.  We did maneuver down and back up a set of 6 locks which was a lot of fun.  An of course there were quite a few pubs along the way!

Back to sailing in the Lost Bay area - well we were visited by Hurricane Nate - our first named hurricane to come through the area since we arrived.  We had prepared both Midnight Sun II and TraSea for storm events before leaving for England.   - Lesson 1 - don't plan an extended trip away during hurricane seasons.  Before leaving, we stripped both boats of canvas and sails (a day's work per boat) and secured them. 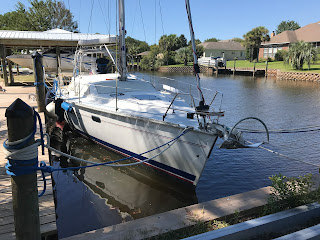 Here's Midnight Sun II - stripped naked, and spidered into her slip.  The plan - if we have a storm while we are away, she is ready.  All that's needed is a line across the canal or a kedged anchor to hold her off the dock.

Fortunately - no storms came our way while we were gone.  Phew - a sigh of relief as there had been lots of tropical activity.  Remember, this is right on the heels of Hurricane Harvey hitting Houston.

Next step after returning from our trip - put her back together again right!  Ready for a sail.  Well that's exactly what we did - spent 2 days putting Midnight Sun II and TraSea back together.  Then....uh oh; only two days passed before Hurricane Nate appeared with a direct path towards us.  Crap! - take it all apart again.  Well at least we would be here - for good or for bad.  So we went into hurricane mode.  Boats prepped, house boarded.  Since TraSea normally lives in a marina, and the marina was evacuating we had to anchor her.  We scoped out a local, secret bayou, and set her with 4 anchors, including a 85 lb Mantus, Fortress FX-125 and FX-85 (massive storm anchors), and a Delta. 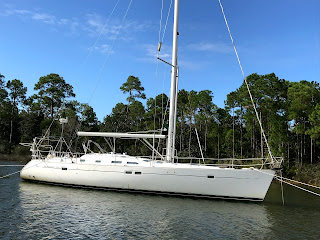 Here she is looking good at anchor.  Two other boats came into this spot.  One small sailboat did an excellent job of anchoring also.  As for the power boat - well, this is one reason why people get a bad name.  Two dock lines tied together holding the bow to a tree, and an anchor of the back.  The anchor drug before the storm even arrived, so we lashed this potential missile into the trees and hoped we would have an opportunity to to meet the owner upon his return. 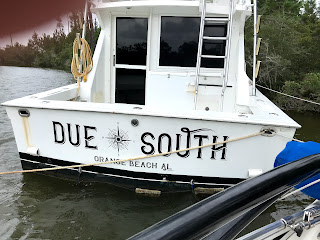 Due South - aptly named, although I think the storm would likely have sent it north!  We figured this was an insurance claim waiting to happen.  Amazingly it survived the storm.  The owner did not appear the day after Nate.  The boat started to sink a day later, so we reported it to the local marine police, and then........it disappeared.  Hmmm.....fishy or what?  You decide, and if you know the owner, tell him he owes us for securing his boat.

Fortunately, as storms in the area go, Nate was not a big issue.  The boats, house and everything did well.  Some local flooding with a surge of about 3 ft., but other than getting wet feet on the dock a couple of times, no problem.  Our biggest problem with this storm? - getting the anchors up that we set for TraSea.  Wow - they were in deep but did their job well! 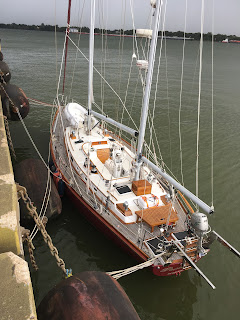 I will try to give the condensed version of this, but is an interesting story to say the least.  First a little background.  My friend Dave has a beautiful sailboat which he recently bought from his father.  It is a 57 ft Bristol Ketch, named S/V Prologue.  Why Prologue? - the start of a new chapter of life....great boat name.

Anyway, Prologue had been kept in Ft. Lauderdale for some time and Dave lives in Galveston - so time to move the boat.  OK, not a bad trip if you break it up, so Dave asked if I could help with the Gulf crossing.  Absolutely!  she looks like (and is) an amazing boat!.

What followed can only be described as a series of  unfortunate events......
Sure - she's had her share of bad luck.  Looks like a great downwind weather window.  Off we go.  We leave Venice at midnight on Friday.  Its pretty rough, 6 ft seas;  but this is a 57 ft, 66,000lb boat, should not be a problem.  We then have a series of damn unfortunate events....here's the quick summary: 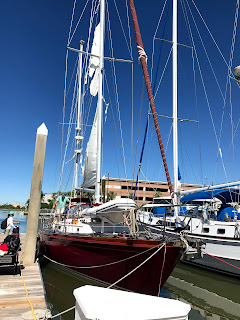 We work through each issue one by one.  New bilge pump, repair connection.  Not sure where water is coming from but seems to have stopped (it turned out to be fresh water, probably a broken pipe/connection somewhere).  Engine - fill Racors manually and it fired.  Now let's get back on course.  We pulled the Genoa out and motor sailed,  Main still out but looks like a rag!

Well  we made it to Galveston.  As you can see, a beautiful boat, but not much left of the mainsail.  This was apparently the original sail (1986).  While the storm certainly finished it off, I suspect this sail was past the end of its life.  So this is about lessons learned right?  Yes, many from this experience.  Although we did fine, and I must say and give great credit to Dave - he was extremely well prepared with spares, tools etc on board.  Still here's what I took away: 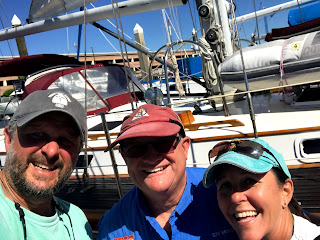 And in case you are wondering....Tracy recovered, we are still friends, we will sail together again, but Tracy says Prologue is not leaving Galveston Bay for quite some time.  Great people!  I am really hoping they will join us in the Bahamas.

More fun on the water in the amazing place where we live.  Point YC put on yet another great event, we have the PYC raft up, and I took very few photos.  But we sailed on SV TraSea and brought home a very respectable second in class, under the leadership of Captain Larry.  And yes, it was a costume party that night - we don't normally sail with hippy s!

Rick Zern on SV Coyote took first in the non-spin class and was as always, amazingly fast!

And that's all for now folks!  Back to work on the boat prepping for the next big trip - Bahamas December 2017. 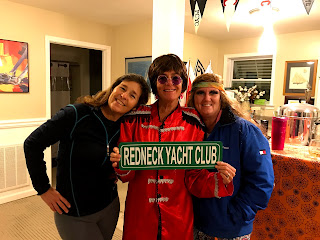