Sailing in the Vicinity of "Lost Bay" - Raft-ups, Racing and Meeting Adventurers

I must admit that I do miss writing about our sailing adventure and journey.  And even though the adventure has come to a temporary end, we are still doing a lot of weekend sailing and exploring the amazing sailing and cruising spots on the gulf coast near the boat's "New Home".

The above photo was taken on morning shortly after sunrise just a couple of weeks ago in what has become one of our favorite little anchoring spots - Ft. McCree.  I am sure the summer tourists are about to explode upon us but for the past several months we have made it there several times and shared with a few other boaters.  Here are a few more shots of the same area when we shared it on a "raft up" with friends from PYC.  We were fortunate to have great weather - even though it is "winter"! 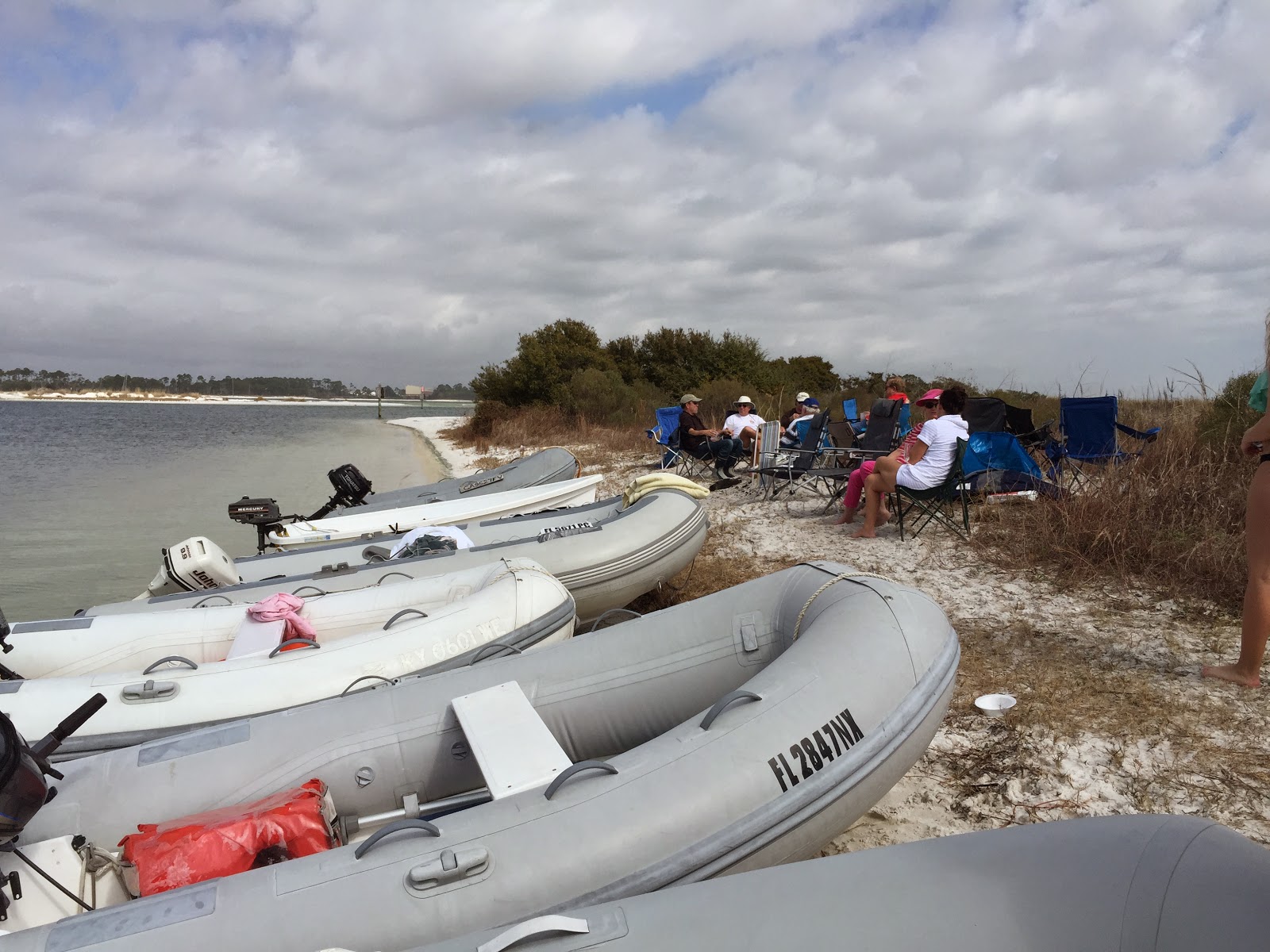 Dinghies lined up for Sunday Brunch

and of course a wonderful sunset.

We have also been fortunate enough to join two great sailing clubs - PYC and Point YC, making new friends, sailing several raft-ups and a couple of races.  And while I am definitely more of a cruiser than a racer,  I have learnt some new things through racing.  This weekend,  had the pleasure of crewing on my new neighbor's boat "Banana Wind", a Cape Dory 19.  We were the first boat to start, and the last boat to finish! but it was a great day on the water. 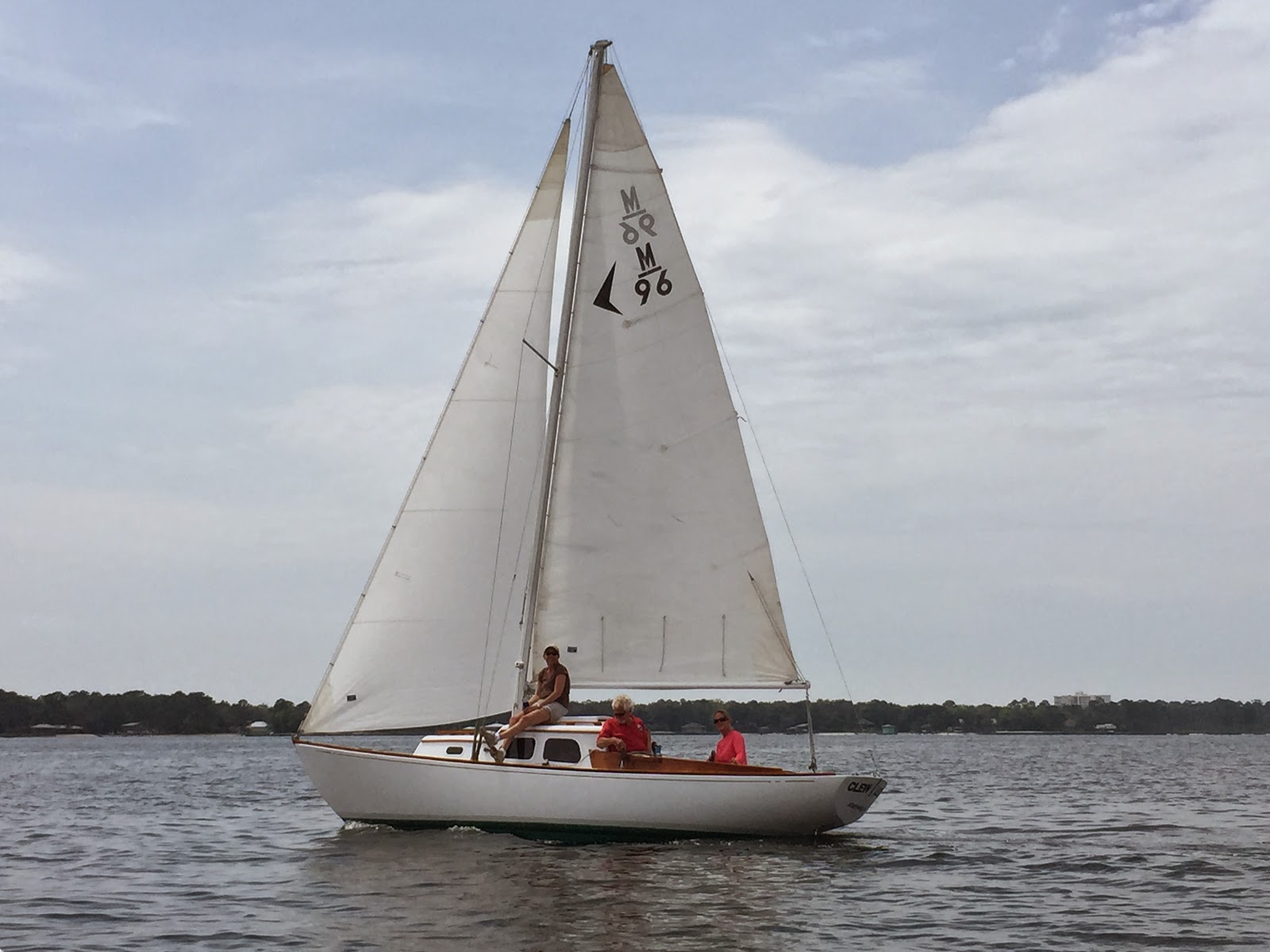 This weekend was also an interesting weekend in that I believe I may have met someone that is about to start out on a real "adventure".  i hope to be able to track his progress and with his permission, I will post a link at a later time to his blog or facebook page.  But for now, I will just say his name is Shaun and he is from Australia.  As with all good stories, I met Shaun in a bar  - not just any bar, this is a very special "sailor's bar".  He started to tell me that he was assembling a home-built catamaran which is a James Wharram design, and that he was planning to leave the  following morning.  His plan is to sail the coastline from Perdido to the Keys.  Of course curiosity got the better of me, so I told him I would stop by tin the morning to see his boat and wish him "fair winds".  So the following morning, I stopped by and here are a few photos of Shaun's Wharram Catamaran.  I must admit, i was expecting it to be larger - but anyway, I plan to try to find out more about his adventures and if I can get his permission, will post a link to wherever he is writing.  i know his plan is to write, take photos and video of his adventure.  Here is his boat. 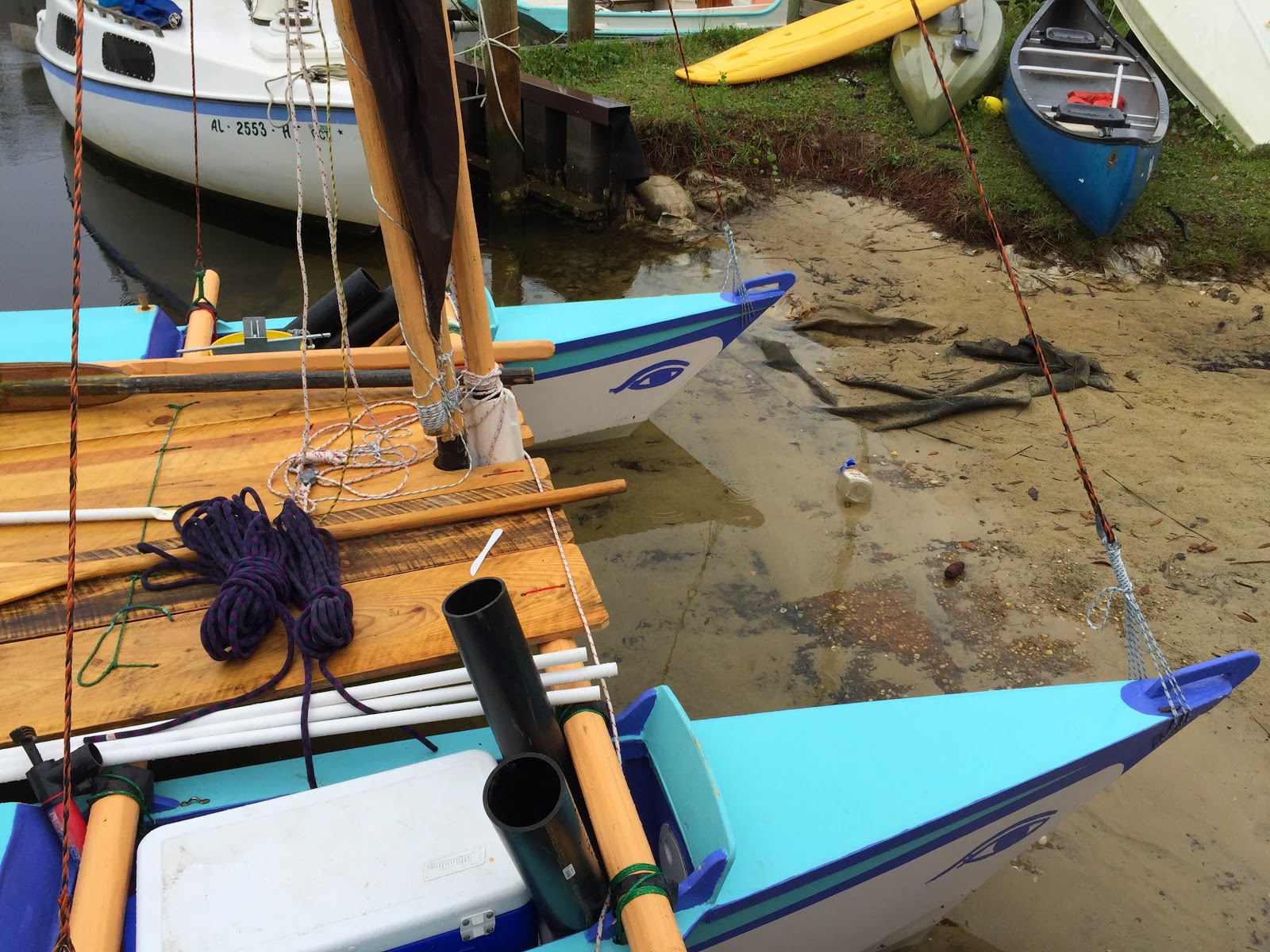 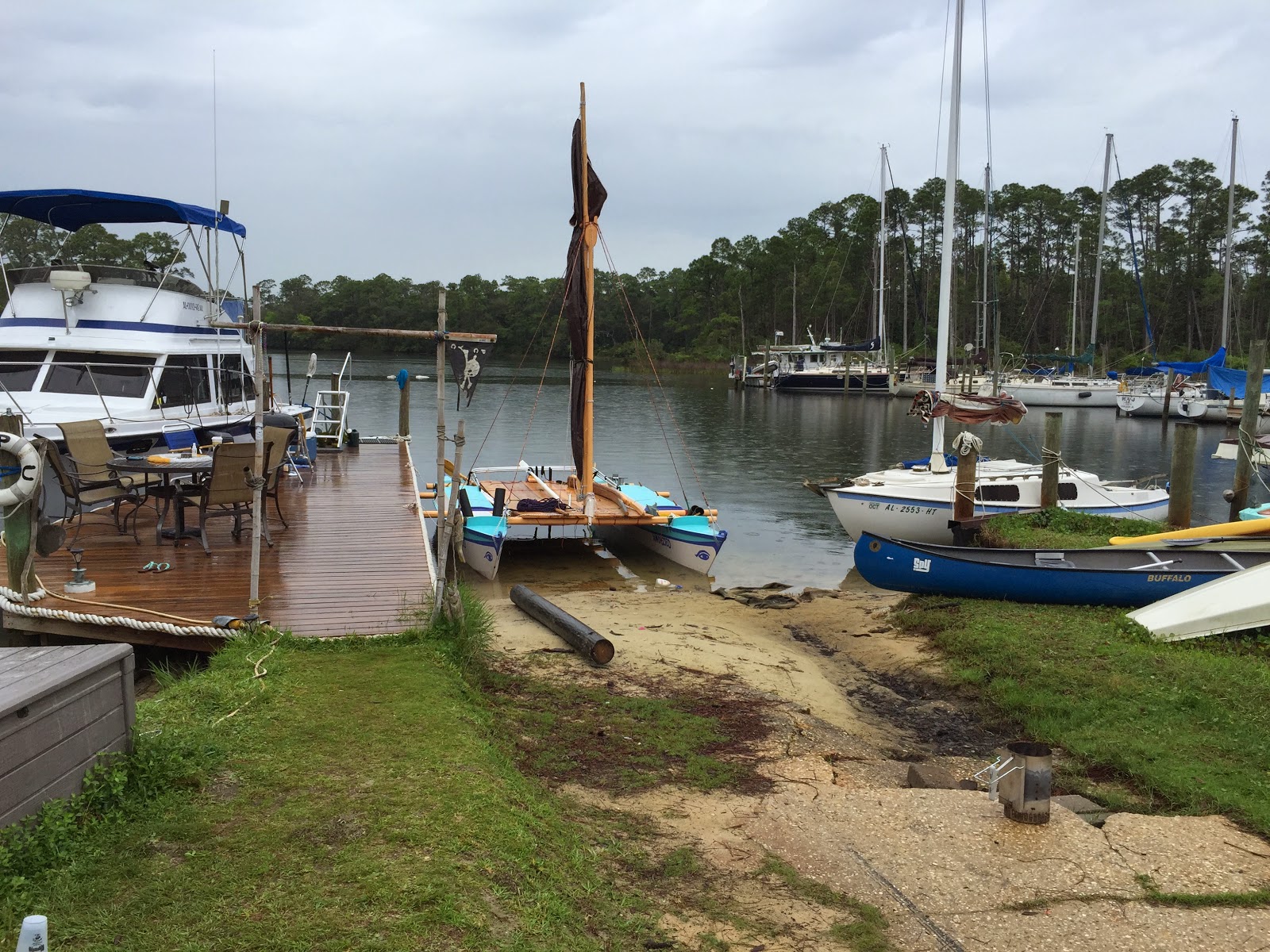 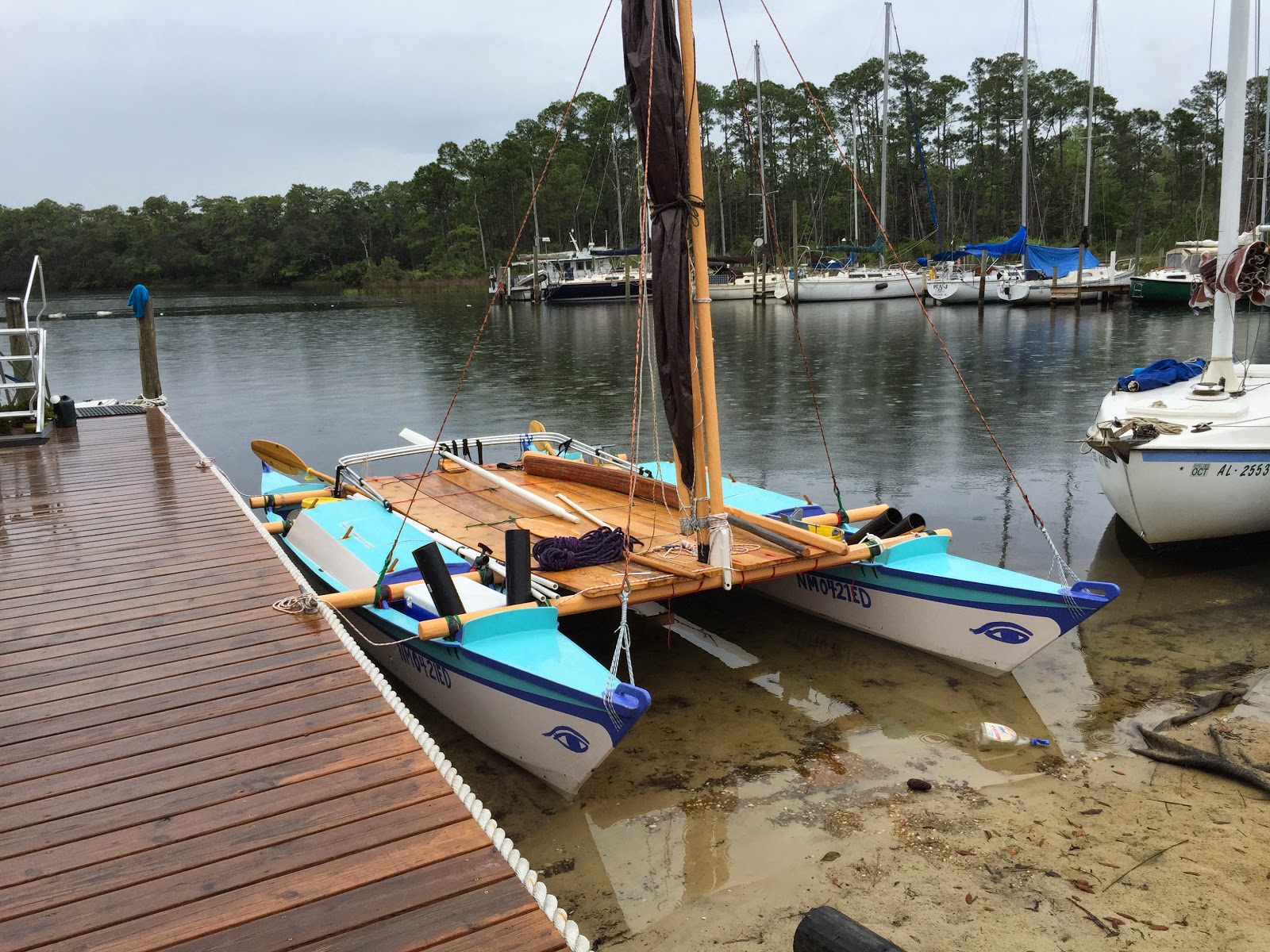 I believe it is a gaff-rigged cat - although I did not see him set off.  He has no motor, but as you can see from the lower photo, he has made a large skulling oar for propulsion.

Shaun - if you see this, i wish you well on you adventure and "keep in touch mate!" This week, it was also time to do some masthead maintenance.  I am not a fan of climbing the mast, and in all honesty i have been putting it off for some time.  I had to do a temporary repair to the mast light over a year ago when we recommissioned the boat, and now the anchor light was out.  i was not sure whether it was a bulb, or my repair had finally failed or worse...wiring gone bad - so it was time to go up the mast and sort it all out. 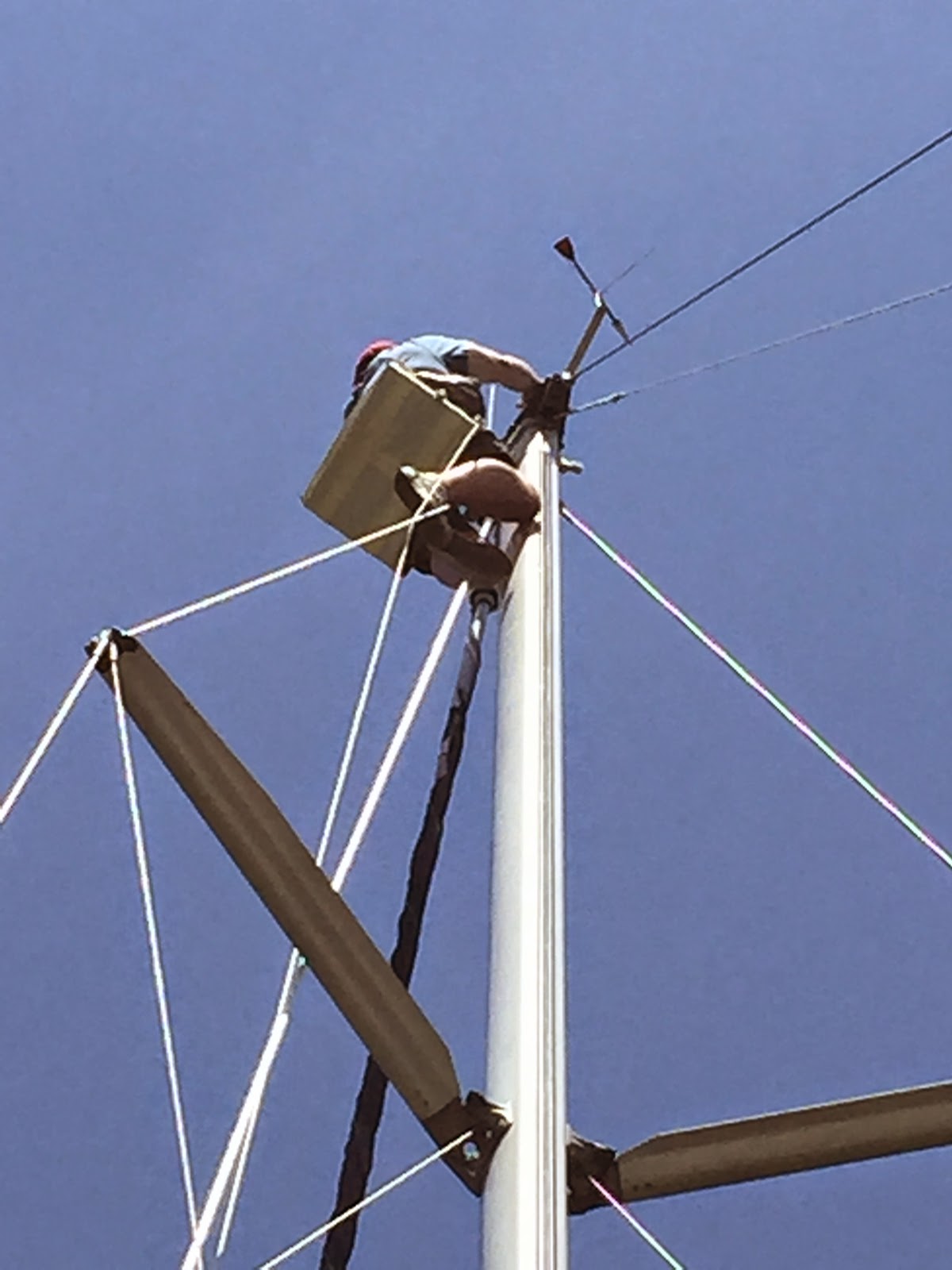 It turned out to be a bad bulb (I hope), so i replaced with LED and also replaced the lens.  Hopefully that will solve the problem.  A bird had also bent up my windex and managed to stuff straw around the anemometer.  So I took care of those while dangling 60 ft in the air.  Not missing a GoPro opportunity, I took the GoPro up......if you are interested in watching the video, send me an email and I will send you a link.