This past weekend (October 1) was Lost Bay Regatta on Perdido Bay.  To me, this is probably one of the best regattas in the area.  Why?  - great people, a fun race, good food, and good music.  The winds were very light (5-10 mph for most of the race), but the race still had its moments of excitement.  Moreover, this is a fun race!  as evidenced by the fact that nobody could remember any boat lodging a protest in recent years.

This year, we crewed on S/V TraSea owned by best friends Larry and Tracy.  TraSea is a Beneteau 473 - so its a big cruising boat that needs some wind to power it!  So in these conditions we were not fast.  But still, that just allows you to drink Mimosas while racing!.....you can tell how serious we are about racing.

There was a good variety of boats, ranging from small racing boats such as Vipers up to a 60-ft custom ketch (S/V Libra).

With these conditions, the small fast boats were the optimum boat for the race.
I think the boat pictured to the left is one of the Vipers, aptly named "Eelsnot".  they seemed like a fun crew with a very unique looking boat!


Here are a few more photos of the event: 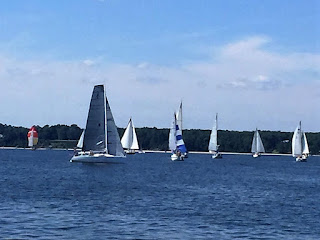 The boat always goes a half knot faster when you do your Titanic pose! - everyone knows that.

This great event was hosted by Point Yacht Club (Pt.YC), and supported by Pensacola Yacht Club (PYC).  Social events were held at Pt.YC.  The number of participants and spectators was boosted by PYC members attending a weekend raft-up that coincided with the event.  We hosted that, including a Friday night party with a food theme of "English Pies".

Saturday night was a fish fry hosted by Pt.YC.  the club served 195 meals and there was dancing to a live duo on the club deck.

Sunday morning was again hosted by PYC and included a bring-a-dish brunch, with Mimosas and Bloody Marys provided by PYC, again on the deck of Pt.YC's club.  Over 100 participants, and observers attended the brunch, making this a successful and fun weekend of events.  Several boats that left the regatta on Sunday headed for Ft. Mcree to spend the night at anchor before returning to Pensacola and Navarre.

Planning for 2017 takes on a new meaning to me once you put it in writing.  And it takes on yet another level of commitment once its posted on the blog - why?  I'm not sure, it just feels like a commitment, and once its made its either becomes the motivation to put a plan in place to make it happen or at least something more than just a wish or goal or idea.

So far, our cruising grounds have included:


I wish I could write a little more detail about some of the thoughts that have gone into planning for 2017, but unfortunately some work-life considerations are a part of this that are not yet finalized and I have to respect and accept that some changes may occur as a result of those discussions.

The world is a large place and there are so many amazing places left that I would  like to see.  I am an avid watcher of YouTube videos about sailing, and yes I like all the popular ones such as S/V Delos, S/V La Vagabonde, Drake Paragon......and several more that are either a bit more "down to earth" or perhaps I should say "closer to may age"....(eeks that makes me feel old!), such as Trio Travels.

S/V Delos on YouTube
S/V La Vagabonde on You Tube
Drake Paragon
Trio Travels
Sailing Baby Blue
Sailing  Where the Coconuts Grow
.........and this is just part of my watchlist.

I also like to talk to sailors and cruisers that have gone much farther afield than I have gone so far.  And here are a couple of common  and perhaps surprising threads that I hear:


So, all that said, as of the time of writing, the cruising plan for 2017 for Midnight Sun II (and/or her crew) is as follows:

Most cruisers will be familiar with each of those, but to put in perspective, the charter will be a couple of weeks; the Cuba race will also be a couple of weeks; and the Thorny Path will be "no schedule".  This is the one I am most apprehensive about putting into writing - not because of the difficulty, more in terms of the time commitment!....So stay tuned, let's see if it all happens!