Sometimes the wind blows a slightly different way than we expect and plans have to be put on hold or change.  There have been a few people that have claimed this quote and a few variations on the theme of:


"You can't change the direction of the wind, but we can adjust the sails to reach the final destination" - Jimmy Dean, Elizabeth Edwards, et al..............or was it Salty that said it?


Unfortunately we have decided we must cut this trip a little shorter than planned.  our last plan was to move on to Cuba and Mexico before returning home, but we have instead decided to head back home from the Keys.  No single issue has caused this decision, more a culmination of some personal/family matters; work-related items; logistics of long-haul passages with Salty on board; and seasonal planning (hurricane season is almost upon us).  So we broke the news to our buddy boaters and  best friends, Larry and Tracy.  Being the wonderful people that they are, they understood and supported our dilemma and decision.  This decision was made in Marathon, so we were actually at a good position to make this change.  Larry and Tracy could continue on to Key West, Cuba and Mexico (which is what they have subsequently done), and we could go coastal up the west coast of Florida to home.  Its a bitter/sweet feeling.  The bitter side being the realization that this cruise will soon be over; the sweet being that its always good to be home - especially in the area where we live.

Since I have covered most of the ports of call for this return voyage several times now in my blog, I will try to keep the rest of this post to the highlights of the return trip adn to emphasize places we have maybe not stopped at previously. OK, well sometimes I am not too good at that and get a little carried away - so bear with me, please.

Our first planned stop on the return journey was Cape Sable.  For anyone that has tracked our blog and journey, recall that we stopped here on our outward journey and just loved the place.  I still have to say this beach, the location, and remoteness certainly rivels most places in the Bahamas.  So we were actually looking forward to returning there.  Leaving Marathon (we stayed at Marathon YC), we crossed Florida Bay doing our best to avoid the web of crab pots.  We did hit a couple so goodness knows what my prop looks like. 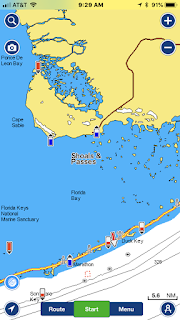 We arrived at Cape Sable mid afternoon with a south wind.  It was forecast to be from the southeast - but it was not.  This made the exposed anchorage quite rolly.  We spend an hour or so going up the coast to see if we could find some protection - but short of going to Little Shark River, we did not find anything.  We ruled out Little Shark River due to issues with getting Salty ashore and decided to just deal with the rolling.  We went ashore by dinghy.  On the way in, we commented on two large logs that were washed up on shore about 100 yds away from us.  As we secured the dinghy I noticed the logs were gone.  By now Salty was enjoying a run on the beach. Hmmmm.... 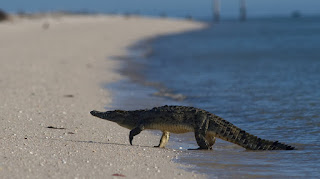 Scouring the shoreline and water, I saw the head of a very large crocodile (cocodrilo - spanish....I love that word!) looking at us.  I felt sure he was he scoping out human or canine for dinner....and where was the other "log".  He swam towards the dinghy starting to cut off our return path.  We quickly scrambled to grab Salty, get to the dinghy and get off the beach.  Yes, it would have been great to have more photos -  but not being the great outdoorsman that wrestles crocodiles......this was just damn freaky scary..  We made it to the dinghy, went about 1/2 mile down the beach, allowed Salty to take care of business and returned quickly to the boat.  Through the binoculars, we saw the "logs" return to their spot on the beach.  Should we draw straws as to who takes Salty for his nightly walk.......or do you want to just sail overnight to the yacht club at Marco Island? 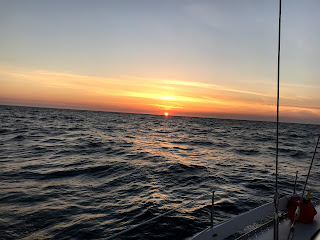 Marco Island Yacht Club won.....the winds were favorable in direction but light.  But we were in no hurry as we wanted to enter Marco at daylight - so we elected to sail overnight.  it was a gorgeous sunset; winds were light but we were making about 5 kts.  The moon came up later in the night making for some nice "light night sailing".  And best of all - no
cocodrilos in sight!
Posted by Neil at 7:48 AM No comments: