Today, February 22 we are anchored at Pensacola Cays, also known as Allan's Cay.  Its a great anchorage and we presently have 5 boats here. 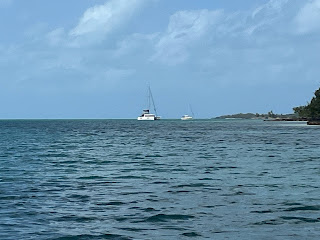 Yesterday, we took the walking trail to the Atlantic side .  There is a small trail about 1/4 mile long that takes you through the mangroves to the Atlantic side of the cay.  Cruisers have collected trash and discarded items and hung them from the tree branches to mark the way.  Its kind of fun, but also sad that there is so much trash!  But we are seeing that more and more in the Bahamas on each of our trips here.

On the Atlantic side, there is a tree where cruisers have hung boat names - so we joined in and added Midnight Sun III and Tra-Sea.  We searched for previous versions we had hung there, but I guess they disappeared in one of the hurricanes that have hit the area over the past few years. 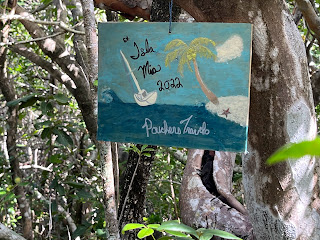 Unfortunately, not all of my photos are pulling into the blog as we have very slow internet, so I will post a few that are presently making it over the airways!

We have been fairly fortunate so far that weather has been generally favorable.  The trip here from Great Sale was not ideal with 20 kts on the nose.  Today's weather is calling for 20 kts from the east - and yes, our next leg to Green Turtle Cay is East!  So we have decided to hang here for another day when the wind is at least supposed to subside, but stay east.  But tomorrow's forecasted 12 kts, sounds a lot more pleasant a ride that today's 20 kts! 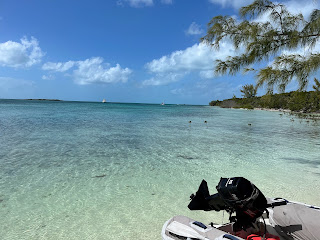 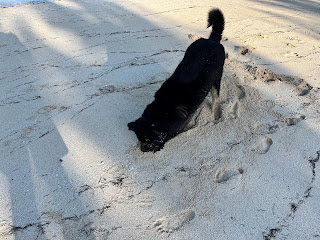 We were so glad to leave Ft. Lauderdale and  all of its hustle and bustle.  While the anchorage at Lake Sylvia was nice, shore access was a challenge  - especially finding a place to take Salty.  We did move to Sunrise Lake for a night so that we could access Coral Gables Yacht Club - that was better with a public park just across the ICW.  But still - this is not the "cruising" we were seeking.

On Friday, February18 (Janet's birthday), we left Ft. Lauderdale at the butt crack of dawn, making the 6am opening of the 17th street bridge.  It was a lumpy start as although winds were now favorable, they had been blowing hard for several days.  after an hour or so we got sails up with about 15kts on the beam.  Using the full main and code zero, we were making 7.5, 8, 9kts depending where we were in relation to the gulf stream.  The ride improved with every hour and was a darn good crossing.  We averaged over 7.7kts from anchorage to dock in West End.  We got a dock at Old Bahama Bay - which was very quiet.  Several boats came in about the same time as us.

We cleared customs and immigration having completed the new on-line visa for everyone, Covid testing, and Click2Clear.  The process was fairly straightforward - with the exception of a few questions on Click2Clear.  So my advice - start early, use a computer not phone, and have reasonable internet access.

Bahamas is currently requiring a Covid test on day 2 of arrival, but there seems to be no way to report results - so rather than paying for a Bahamas test, we used our own rapid tests from home and photo-documented our results.  Let's see what happens!

On Saturday, conditions were good, but light wind several boats headed out towards Great Cape Sale.  We were first in to an empty anchorage.  Several closely followed including  Tra-Sea, new friends on Southern Breeze and Mirage.

We had passed through Great Sale before, but with only a brief stop.  We needed to get Salty ashore and on the East Side access was very poor with gnarly limestone banks.  But we made it in for a brief walk.  The following day, we found the "Landing" marked vaguely on the charts which proved to be a rock wall (probably where a dock had been at some time) with a pathway to the nice sandy beach on the west side of the island.  We saw remnants of a NASA tracking station that was apparently used many years ago, but was likely destroyed in one of the hurricanes.

After a beach walk, we loaded up for the next leg which was to take us to Pensacola Cay/Allens Cay.  It turned into a 33 mile beat into 20 kts wind and very lumpy 2-3 ft seas at about 2 second period.  Yuck!  But Pensacola cay is a way better stop and it looks like we may have a few more days with East winds.  But the crew I think is ready for a down day, so we will check weather and come up with a plan.  This afternoon, we plan to make the walk across the island to the Atlantic side. 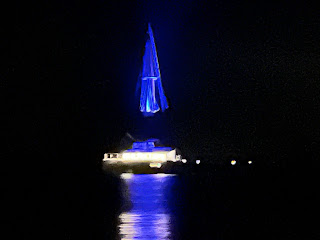 We made the treck to the Atlantic side through the mangroves - it was really quite fun!  We made signs for our boat names and hung them in the memory tree there.  Unfortunately none of our previous ones had survived the hurricanes of he past few years! 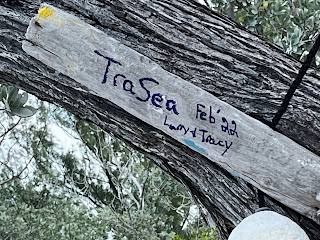 With the weather warming up and the Keys almost in sight - I replaced the AC pump that had gone bad and we were off.  Before leaving Naples Yacht Club, we perused some gorgeous antique cars in the parking lot - my favorite, the 1961 Rolls Royce convertible!   We spent a night in Marco Island at a marina in Factory Bay and had dinner in old Marco.  The next day we headed out for Cape Sable 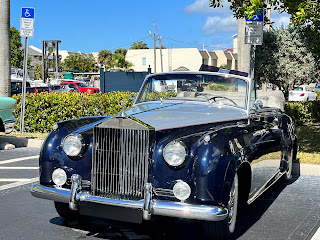 We had a good sail to Cape Sable, passing by the Ten Thousand Islands and Everglades.  We were a little apprehensive about a stop at Cape Sable for two reasons: we planned to anchor off the beach which can be very exposed, but it was a north wind and I figured we could get just around the cape anchoring at Middle Cape with some shelter from swells; secondly, last time here we saw saltwater crocodiles on the beach and were almost cut off from the dinghy by them...........and we have Salty!  So we played it safe and took him for his beach walk with close lookout and made sure it was before dark.
From Cape Sable, we had planned to go to Marathon for the obligatory night in the Boot Cay mooring field - just to prove that we would not get trapped there like so many do!  However, I talked to another boater already in there and found it was packed.  He had waited 10 days on anchor to get a spot in there - not sure why anyone would do that, but each to his own.  Given this, we elected to take the marked channel from Cape Sable to Key Largo across Florida Bay.  Wow it was shallow but we had a great sail.  Typical depths were 6-8 ft, but we saw 4.5 and somehow, we didn't touch the bottom..

We made it to Snake creek in great time and then decided to anchor by Ocean View Pub.  This was a nice anchorage, wide open with lots of space and a dinghy dock for pub customers.
We found the pub to be very pet friendly - so Salty was happy he made a new friend who apparently lives on the bar!
Moving right along, our next stop would be Miami.

We were very fortunate to get a mooring at the Coconut Grove Sailing Club.  Located just inside a small island, this is the most sheltered mooring field in Miami - way better then Dinner Key which is outside of the little island and completely exposed.  We stayed for 2 nights here as we were ahead of schedule and meeting our friends Larry and Tracy who were now on their way south from Brunswick to join us in Ft. Lauderdale. 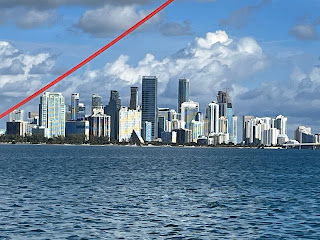 We had a good time in Miami, did some provisioning, and found a couple of wine bars!
The local Fresh Market proved to be well stocked, and was very close to the mooring field.  We decided we will try to go back this way after Ft. Lauderdale to stage for the Bahama crossing.

We met up with good friends Annie and Phillip in Ft. Lauderdale.  They were anchored in Lake Sylvia so we decided to join them.  Located near 17th street, this is a lake set amongst multi-million dollar homes! but very protected.  However, anchoring was a bit of a challenge doe to a mud bottom and many boats.  But we did it.  And while here, another repair was needed - the watermaker was not working but I suspected a broken impeller on the raw water lift pump.  Sure enough - that proved to be the issue and I had a couple of spares! 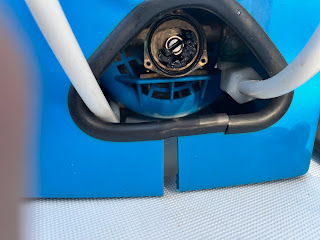 Fixing boats in exotic locations!  or at least in expensive neighborhoods.......
Posted by Neil at 10:39 AM No comments:

We had an easy trip south from St.Pete's to Sarasota.  Once again, we took advantage of our yacht club membership and got our "free night" at the beautiful Sarasota Yacht Club.  Unfortunately it was Monday and the club facilities were closed, but the docks were open and the staff as great as always. 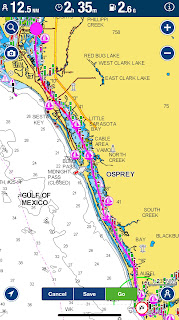 I had planned to sail from Sarasota in the Gulf for the short trip to Venice,  However, I was advised by a member at Sarasota YC that the inlet there was badly shoaled.  For that reason we reluctantly continued on "down the ditch" Nonetheless, it was a great relaxing trip passing through several Bascule Bridges along the way, including Blackburn Point swing bridge - a railroad brige that pivots from the center, making for a narrow passage (on a cat).
We also caught up with our friend and SSCA Cruising Station Host, Melinda Schell who had kindly allowed us to ship a pump to her.  Yes, first significant breakdown was the seawater pump for 3 of the AC units.  While we didn't need AC, it also serves as a reverse cycle heating system.....but fortunately we had a couple of space heaters on the boat.  However, we will need it soon and Melinda was kind enough to bring us the pump. 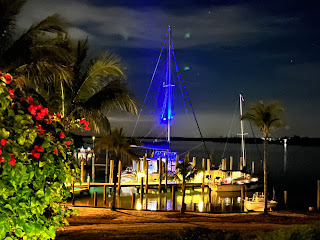 Our next stop was the delightful Cabbage Cay  - we did get to sail most of the way, coming inside at Boca Grande.  Cabbage Cay has a wonderful nature trail where you can see huge turtles and many other forms of wildlife.  The restaurant/bar there is excellent, but pricey.  Surprisingly, the small marina is reasonable at $1.95/ft - so we did take a slip for the night.  It was a little tight getting in....but nice!

The plan was to stop at Ft. Myers Beach..........but - the mooring field was full with 40 boats ahead of us on the waitlist.  Every marina I called was  full - until April.  Geez - what's going on!  So i made a decision to head straight for Naples and we got a spot at the Naples Yacht and Sailing Center.  A dock was more convenient as daughter Helen was making a surprise visit, and Ted and Ebba were leaving Saturday.  So all things work out well!  We arrived at the YC at 6:20pm as the sun had just set - but crap - there was a boat in a our assigned slip and the dockmaster had left for the day.  But Amanda was great and found us an alternative slip, so all was good!  We will be her until about Sunday and then push off towards Marco Island.........well that's the plan.
Posted by Neil at 11:38 AM No comments: