Trip to the Forgotten Coast

Back to Florida's Forgotten Coast


If you read my blog on a regular basis.you may have seen several posts about Florida's Forgotten Coast.  Maybe that is because its one of my favorite cruising grounds.  Having now sailed from Europe, through the Caribbean, Mexico, Bahamas, Cuba......well I have to say, this is still one of my favorite cruising grounds.  Why? - white, deserted beaches; virtually no plastic debris; nice anchorages, blue water; friendly towns and locals........and its close to home.  All attributes that  go a long way towards making it a special place!

Our trip took us from home to Ft. McCree, Pensacola for an overnight stay.  We left McRee at around 8am with nice winds from the S, to SW.  The seas were a little big and confused due to the remnants of Tropical Storm Cristobal which came through the area over the weekend.  But all in all not bad and the south winds were perfect for our ENE sail to Panama City. 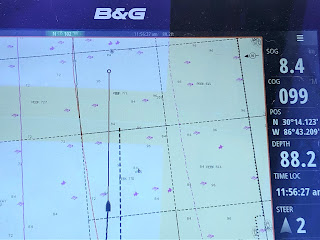 We made great time with speeds generally over mid 7s and regularly into the 8s and 9s.  We were able to fly our Code Zero sail all the way.  We did get a little close to its rated 20 kt apparent wind speed, but all was good.

I think the top speed that I saw for the day was 10.9kts.  Which is pretty respectable for a cruising cat in winds that didn't exceed about 18kts.

It was a great sail, and we made it into Panama City/St. Andrews Bay well before dark anchoring near Shell Island.

Salty enjoyed stretching his legs after a long 85 mile day-sail on the shore at Shell Island.and all was good for the night.

The following day (Thursday) we set sail again for Cape San Blas/St. Joe's Bay.  The wind was light and nowhere near as cooperative so it was a motor sail, but with full sail and one engine running, we were making a respectable 6.5 to 7 kts making it a sort 25 mile day to the anchorage at the  tip of Cape San Blas. 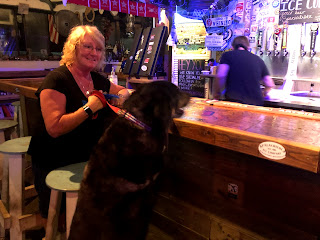 After a night at the Cape, we continued on to Apalachicola and spent a night at the Apalachicola Marina.  Well marina is a bit of a stretch - its a long side-tie dock with power and water, an that's the extent of the facilities.  But its a great location right across the street from Apalachicola Ice Company (Bar).  Salty enjoyed talking to the bar staff and listening to the band! 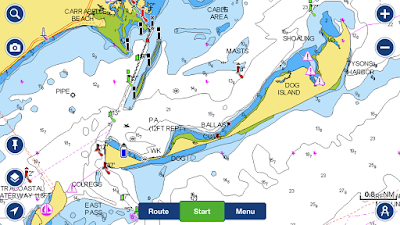 The following day, we moved on again and headed for Carabelle and Dog Island.  The first night we
anchored just off  Carabelle Beach for a smooth night at anchor.  The following day, we explored Dog Island.  We headed over to the east end first and explored the area around Tyson's Harbor.  I was surprised at the number of homes on this private island and cars - since there is no ferry service that supports the island..  There is apparently a water taxi available from Carabelle.

For the evening, we moved down to Shipping Cove on the west end of the island.  This proved to be a great spot with a nice beach that formed a narrow barrier between the bay and the Gulf of Mexico.  The view from the anchorage was great, and the narrow sandy beach between us and the Gulf provided protection from any wave action. 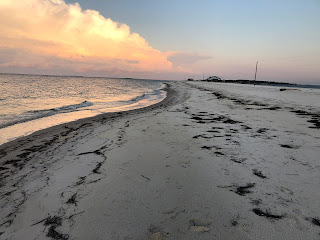 The following day we decided reluctantly to start the return journey.  Looking ahead at the weather, we saw less favorable winds - not heavy, just with a west component making it "uphill sailing".  We decided that we would sail on the outside (Gulf) on the return.  Our boat-buddy, Tra-Sea indeed did this.  We set off out of the pass and conditions were not great.  We were hobby-horsing and the admiral  was not feeling great.  She had been a trouper as she is recovering from a bout of Shingles.  So, given the discomfort we elected to follow our outbound tracks and return via the bay and ICW to Cape San Blas. 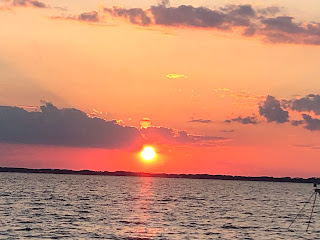 We actually had a great downwind (dead downwind) sail across St. George's Bay before motoring along the ICW/Apalachicola River.  It was a nice comfortable trip and I think the admiral approved of the route!  Surprisingly, we arrived in St. Joes Bay just ahead of Tra-Sea and again spent the night just off Cape San Blas.

The following day we moved the boats and anchored just off the entrance to the old marina which as destroyed by hurricane Michael and to date has not been re-built.  It does seem however that a portion of the marina sea wall is actually public and is outside the fenced area.  We ere able to tie up our dinghies to the wall for a  visit into town.  There is also a fishing charter boat that seems to be operating from this spot.  We love the town of Port St. Joe.  It is so friendly and the town is not over-run with tourists (most of the time).  We had a great lunch at Krazyfish, got a few provisions from the Pig (Piggly Wiggly), and of course had "just one more" at the Haughty Heron.

We decided to try a different anchorage for the night and new spot for us.  We moved the boats down
to the south end of St. Joes Bay to an area known as Lighthouse Bay.  We attempted to dinghy over to to a relatively new brew pub called Scallop Republic.located near Salinas Park.  Unfortunately we tried this at low tide and water in the majority of this end of the bay was less than one foot deep.  We got to within about 100 yards..........but the girls were not up for walking in the mud!!.....so it was drinks and dinner on the boat.

The following day we sailed back to St. Andrews and were able to dock at the St. Andrews Yacht Club.  even though still suffering from some storm damage, the club is open, and they have one floating dock available with no power or water.  The staff were great adn very helpful.  We actually stayed 2 nights making use of thier nice swimming pool.  We then headed onwards to Destin. for the night.

As we arrived in Destin, we discovered we had lost a prop somewhere en-route.  No idea how or where!  it was definitely on the boat as we motored out of the pass.  We then sailed; but when we headed to wind to drop sails, we had limited control and no drive from the port side.  After safely anchoring in Destin Harbor, a quick dip in the water confirmed that a prop was missing......Geez - no idea where that went.  its a folding Flexofold........so it will be $$$$$$$$$.   The following day we limped home on one engine...upwind.  We motorsailed as and when we could to keep a reasonable speed.   So now the search is on for a replacement prop.  It looks like it will have to be shipped from Denmark as none of the US prop shops seem to stock them.  Ugh......oh well - that's sailing! 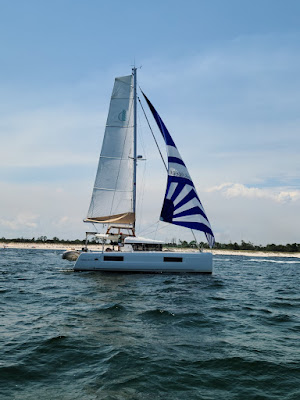 Covid lockdown has given me a little more time to work on the video series from our Atlantic crossing.  I really want to get this entire trip chronicled as soon as possible.

Well I am happy to report that I just completed Episode 8 of the series which takes us from Antigua to the Bahamas.  Here is a link to the lastst video in the series.

And if you are interested in viewing the entire 8 episode series.  Here is a link to the Playlist.  i think it will take one, possible teo more episodes to complete the documentation of the trip back to "Sweet Home Alabama"......hopefully I can keep up the motivation and complete that within a couple of weeks!  However, i am planning a sailing trip to Apalachicola........so that might add a delay!

Here's a link to the 8 Episode Playlist:
https://www.youtube.com/playlist?list=PL1CVeu-DfE4bTvGPQCiv6wtwW97KFcsYn