To the Berrys...working our way to the USA

We have chilled out in Spanish Wells for the week!  I did a couple of small boat projects, as you do (cruising=fixing boats in exotic locations!).  But it was nice to chill in a location with a little bit going on while the weather slowly calmed down a bit........at least I hope it has.  We will see in the morning.

We had a great but short sail (7-8 miles) to Egg Island just off the northern end of what is generally called Eleuthera but is really George Island, Russel Island and Royal Island. The anchorage at Egg Island was beautiful - one of the nicer spots in the Bahamas so far.  Nothing there but beach and some snorkelling, but just a wonderful setting.  We stayed the night at Egg Island to stage for our crossing to the Berrys

We left Egg at around 7:00 to 7:30am in order to try to get the best winds.  In hindsight - it looked like we had left it a day too late and sure enough the winds were quickly dying.  We had thoughts of sailing ont he code zero alone - which we tried then switing to the Spin as the wind died.  It wa dead behind us.  It quickly went from 12-10-8-6.  We could have puttered along at 4 kts maybe under sail, but we also had some pretty big swells.  Nothing uncomfortable, but sure enough, light wind and big swells was causing the sails to collapse and flog.  We motor-sailed as long as we could stand it then reluctantly rolled up the nhadsail.  It was a good crossing - but it sure would have been nice to sail more of it.

We entered the Berrys at Little Harbor Cay, about midway along the island chain.  The cut was easy, being nice and wide and deep on the south side of some rocks where we could see waves breaking.  Once inside, the depths became quite shallow.  We headed a couple of miles north on the marked route and anchored at Devils Cay.  We had the spot to ourselves but could see a few other boats in nearby anchorages.  It is beautiful and protected from east winds here, but would be wide open to any weather from the west.
To the south os us is Flo's Conch Shack - at the time of writing we have not been yet, but may go.  Its apparently famous for its conch fritters........which seems like many english places that are famous for their "fish and chips!"  Now to me conch is ok, but not something I would travel for.  Fish and chips on the other hand........well, there are some good ones to be had!

The next day we moved just a little north to Hoffman's Cay.  This is the site of Hoffman's Blue hole.  Wow!  the anchorage was amazing, we jumped into the BLue Hole; Salty absolutely loved it!  So much sot hat we returned the next day to do it all again! 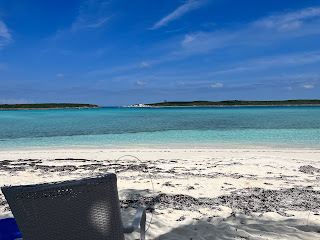 I do think this was perhaps one of the very best anchorages we have stayed in during our trip to the Bahamas!  and that says a lot in itself.
The beaches were clean and spectacular, adn the Blue hole was quite a sight! 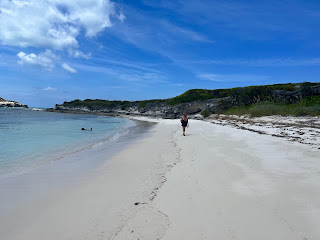 And as we returned to the boat from the Blue hole - this was the sight that greeted us! 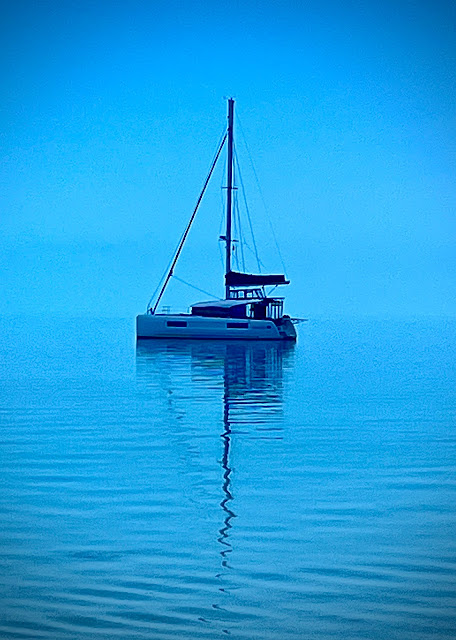 A total "blue out" where the sky truly met the ocean!
After a couple of days at Hoffman's it was time to move on.  We elected to move up to the northern Berrys - Great Stirrup Cay area.
We found a place to stop for the night - but what a contrast!  We anchored at Snake cay and took Salty ashore on the southern end of Great Stirrup.  Great Stirrup has become the "private island" for a number of cruise ships - what a monstrocity!  Fun park with water slides, a helium baloon ride that takes you 400ft into the air........adn everything else that goes with that.  Needless to say, we got a visit from security for taking Salty ashore - we were reminded (very professionally and courteous), that we could not cross private property, but we were welcome to use the beach up to the high tide line per Bahamian Law.  We did, and we left early the following morning. 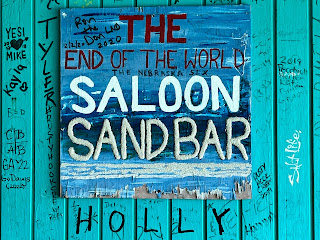 Our return trip took us a with a long day to Bimini - last stop before the USA.  Bimini is far from a Bahamian treaure........well more honestly, its a bit of a dump as far as the island goes.  But its a good spot to clear in and out.  There are a couple fun spots and the Bluewater marina is reasonably priced.  Big Game Club serves reasonable food, and the End of the World Sandbar is definately a place to visit - as we have done on several trips! 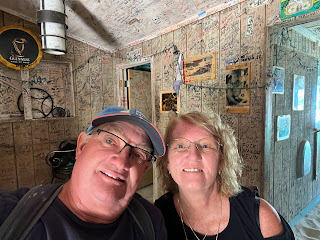 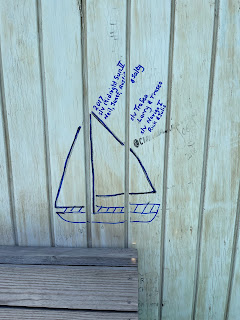 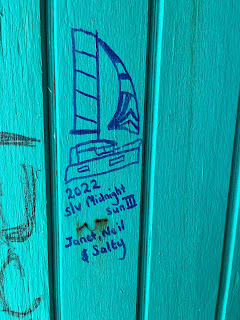 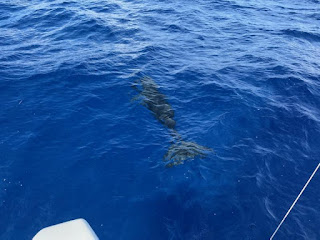 After 2 nights, we headed back towards Miami.  Winds were lighter than forecast, so it became a motor-sail, fighting the gulf stream to stay south.  But we did have one amazing surprise.  As we left Bimini, we were escorted by a pod of Pilot Whales!  At first, I thought they were dolphins, but they were larger and darker in color - and clearly not dolphins!  What an amazing sight to end out time in the Bahamas! 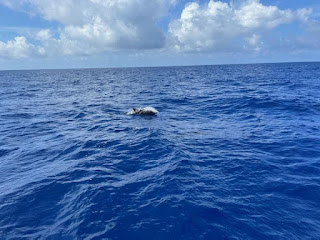