The race was scheduled for a start on April 30.  Participants were assembled at Pensacola Yacht Club.  We were very fortunate in that Commodore Escrich of the Hemingway International Yacht Club was in the area visiting several Gulf yacht clubs.  We were able to have him join us for a pre-race celebration.


We held the Skipper's Meeting at 16:00 with a cold front and thunderstorms approaching. Our Weather Consultants, WRI were advising of strong thunderstorms in the area as the cold front passed through.  Our race committee made the decision to postpone until Monday at 2pm.  In my mind a very wise decision even though a few of the racers and modern cruisers wanted to go.  The night proved the point.  We heard reports of cleats pulling out in Palafox Marina and 6 boats breaking free at Barber Marina under 50+ kt winds.  Why anyone would put to sea voluntarily in these conditions beats me - but I'm a cruiser and know that schedule can be a killer!  As a post-race note, I spoke to WRI a few days later and they commented "thank God you postponed...." ironically, it was also the anniversary of the very tragic Dauphin Island Race which was also postponed and re-scheduled.

Anyway....fast forward to the race.  We were crew on Night Sky, A beautiful Tartan 4400.  So, I prepared a log of the race, and decided that the best things to do is to publish that with no edits - so apologies for typos and bad grammar, as this was prepared largely underway when the weather conditions permitted.

After a postponed start, the race commenced at 2pm Monday, May 1.   It was a beautiful day in Pensacola Bay with light winds.  PYC staff had done an amazing job of entertaining participants during the delay.  The postponed start was a good decision after the previous night, where 60 mph winds were measured in the Pensacola area.   With reports of boats breaking from their moorings in Barber Marina, and dock cleats breaking in Palafox marina, most sailors were relieved about the postponement.  Of course there were a few die-hards and blow-hards (every pun intended) that wanted to go despite the known storm.  I personally believe our race committee, headed by PRO Dr. Richard Brent made an excellent call.  I see no reason to go out there knowing that you are going to be in storm conditions.  Dealing with it appropriately after the start is completely appropriate in my mind.

With separate starts about 5 minutes apart for the three divisions of Racers, Modern Cruisers, and Classic Cruisers, the fleet left the start line and headed up Pensacola Bay and out to sea on a light breeze. 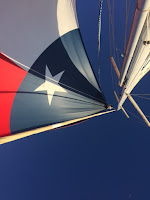 We soon saw the racers disappear ahead of us together some of the faster Modern Cruisers. Conditions were excellent and as the winds built, we had a wonderful sail. In the evening and night hours the winds died, but the seas were still lumpy form the previous day storms. We resisted the urge to motor and persevered sometimes at speeds of less than 2 kts.  Before nightfall we raised the spinnaker to improve speed, but doused it as we lost light. 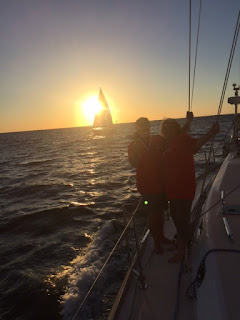 By morning we suspected we had lost some ground on the fleet as we suspected that other boats likely motored. This was confirmed at radio check-in when the boats we could hear reported their positions. We had not motored. We had another great sail during daylight hours and selected a strategy of getting to the east of the rhumb line. We felt this was the place to be to minimize our time in dead wind, and for best position when the winds would return from the NE.

With nightfall came the expected lull in winds.  We again tried the spinnaker, but that wasn't helping, so we made the decision to motor until winds returned. During the night, we chatted with a few other participants, and learned that Acadia was having engine issues.  We offered some suggestions as did other boats and we understand that the issues was late resolved. We motored through the night until the winds returned.

Seas were flat with no wind to speak of during the night. At sunrise, the wind returned from the NE to E.  it was right at sunrise - 6am. We quickly stopped the motor, recorded information on our motoring log, and trimmed  the sails. With wind close to the beam, and winds popping up to the mid teens, we were sailing at a very respectable 6.5-7 kts.

No other vessels were in sight. Who motored? Who persevered and sailed last night?  We will not know until motoring logs are submitted.  We just had a fine hearty breakfast of sausage, grits, eggs and veggies, fruit and a light beer.  Breakfast of Kings, prepared by Captains Ron and Julie!
Wednesday night, we had building winds and the direction shifted SE on our nose. We tacked back and forth through the night and while we made distance, we made little progress towards the mark. We had some equipment issues with the whisker pole breaking loose. The sea state was not good, everyone was up most of the night. Maybe we should have motored?

We got a report on our DeLorme of our position in the fleet. It was depressing as we were close to the back. This served to confirm that others must be motoring through the unfavorable winds. We pressed on sailing on Thursday with winds again from the SE. We were making a little better progress but not enough. We were getting reports of boats in our division being 50-100 miles ahead.......they must be motoring.
Mid afternoon Thursday we were expecting rain and a cold front coming through. And it did. Although we were expecting it, the front came early and with vengeance. Very sudden, with little warning we had winds from the NW at 37 kts. We were flying but broke some things. Some stitching in the Bimini dodger gave way, and a car on the  reefing system came loose.
That night we had a small craft advisory with expected 25-45 kt winds and thunderstorms. We needed daylight and calmer seas to make repairs so with high, rolling seas, we elected to motor and make progress on the mark. We came through an apparent gap in the thunder storms. We had some big seas, lightening, and winds in the 20s. Looks like we missed the worst of it.
We heard via DeLorme and vhf that 4 boats had abandoned the race - Free Spirit, Navigo, Valentine, and Radio Flyer. All headed to Charlotte harbor.

Cinco de Mayo!  We will surely drink to celebrate. We are still motoring. We could sail but  it would not be comfortable and we need to make progress. Big seas and an awesome dolphin display this morning. Of course, while I was sleeping. The excitement builds as we have Havana in our sights. We just passed west of Rebecca Shoals, and have the Straights of Florida to cross. We have passed some commercial ships and expect more on this final leg. We also heard that Valentine is back in the race. Not sure of the circumstances, but I'm sure it will be a good bar story!  We believe we are ahead of Valentine, Pliedes, and Reverie. But again, motoring records will shift all positions. We are hearing that boats have arrived or are arriving in Havana.

Friday night was a rough night for our crew. We discovered we were out of diesel. The gauge was not reading accurately and for unknown reasons our fuel consumption about twice what we expected. Either way we had no fuel to get in Marina Hemingway. We crossed the finish line at around 1:30am. Recorded our time. It was very rough with breaking seas in the marina entrance. The coast guard had closed the marina entrance. We had to hold off, offshore in very rough conditions with no engine. What an awful night!  We were there...but we were not.  Sitting, rolling around in the sea just a 1/2 mile offshore and in 2,000 ft of water.  The next morning, with help from PYC members and particularly volunteer, Margo Partain,  we were able to convince the Cubans to bring us fuel so we could enter the still treacherous pass.

Things would not be possible without out RC Volunteers, Margo, Jeff Hunt and Hillary (friend of Margo). They did an amazing job of greeting the boats and scoring!

Boats were scored with adjustments to time for motoring. Results were transmitted to PYC as a final check.  We had an excellent party at HIYC with comments by Commodore Escrich and Neil Davies. Awards were made and we then had a meal and dancing with traditional Cuban band. The party went on till late night and a great time was had by all.

First to Finish:  Voices In The Sky (but with significant motoring penalty)
Did not finish (DNF) Free Spirit, Navigo I, Pleiades, Radio Flyer, Valentine – Pleiades finished but did not turn in motoring log prior to awards ceremony.  A crew member fell and broke leg in 2 places while leaving boat at the marina.  Crew was able to attend awards ceremony.  Plaque awarded to Pleiades.

Night Sky was second in Class...we . were thrilled!  The Crew of Parley were an extremely close second overall and were similarly thrilled to receive their award

This was indeed a tough race with challenging weather. The winners and leaders must have made some great strategic decisions and it's a testament to their sailing skills.

Unfortunately we know of 2 injuries. A crew member on Pliedes stepped off the boat at the customs dock and missed the dock resulting in a fracture to his leg. He is currently in hospital in Havana. We heard of another injury - a dislocated shoulder and broken collar bone. We think this was on Akoya, but not confirmed. We understand the person involved may have been flown back to the US, but not yet confirmed.
End of log 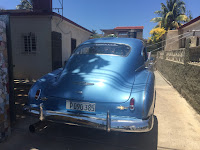 So- -that was the race~. we were tired but happy to be in Cuba.  The awards parties were great, and we had trips planned to Cienfuegos and Trinidad (by road) and a cruise to Cayo Levisa.  I will catch up on those on my next posts!
Posted by Neil at 7:47 AM No comments: