In these challenging times, we have decided to "social distance" on our boat and to continue to explore within the limits of the Local State Orders and with reasonable precautions.  Florida, Alabama, and neighboring Gulf States have not outlawed recreational boating and in fact consider it an "essential recreational activity".  To that end, we have been travelling with our closest friends Larry and Tracy (who we spend most of our time with), on our respective boats - SV Midnight Sun III and SV TraSea .

During the last 2-3 months we have explored some of the less well known anchorages around our local area which includes many of the bays between Pensacola Bay and Mobile Bay.  I must start by saying that typically when we explore the coastal areas in our area, we typically head east.  Why?  Well the water is clearer, the beaches are some of the best in the world........and some of our favorite destinations such as Apalachicola and St. Joes Bay are located to our east and within a day or two sailing.

But this time, to be different, we decided we would explore west.  We live (and keep our boat) just west of Pensacola, Fl on Arnica Bay, Alabama.  So a trip west starts with a ride down the Alabama Canal (ICW) to Mobile Bay.  Most local sailors (including me) tend to avoid Mobile Bay.  The water is shallow, the discharging rivers provide a high sediment loading, and there are a significant number of oil and gas structures.  It has a reputation for being a rough bay to cross - not huge waves, but under the wrong conditions, 4 ft waves with a 4 second period just make for an uncomfortable ride.

Notwithstanding this, we were looking at a week of terrific weather, and we decided this would be a good time to explore the rarely cruised Chandeleur Islands of Louisiana.  The islands are located in the Mississippi Delta and are known by fishermen as great fishing grounds.  The screenshot below shows our path and their position.  Sorry - I forgot to turn on the tracker until we were offshore, but you can connect the dots from our home (red flag), along the ICW , across Mobile bay, and along the coastal islands.

We spent the first night at Dauphin Island, just on the west side of Mobile Bay.  While this is often a forgotten anchorage, there were actually several sailboats anchored in what we consider the best anchorage on the south side of the island.  The approach looks shallow, but the instructions on Active Captain are good - basically follow the ship channel out to buoy 15; turn west and head for the 4 ft area shown on the chart.....don't worry, there's nothing less than 9 ft even at low tide.  Then you will see that Pelican Island has joined with Dauphin to create an anchorage (8-12 ft deep) that is pretected by low dunes on almost all sides.  It has best protection from north winds, but is fine for moderate blows in all directions.  There is a great little bar/restaurant called Pirates Bar......right now during the COVID Pandemic, they are only serving wings and pizza to go........but normally they have pretty good food and you can use their pool for a few bucks.

The beaches at Dauphin island are quite nice and generally clean.  The water is not great due to the sediment load from Mobile Bay. 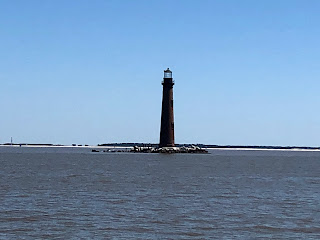 There are some good views to be had - such as Middle Light in Mobile Bay.  Its really quite a sight and you can sail by it within a few hundred feet.

But then there are also the other extremes - the oil and (more likely) gas production platforms.  Some in operation, and some abandoned.....but all in all, quite a collection of rusting engineering "junk metal". 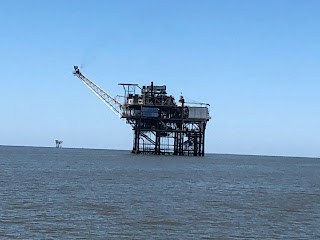 But it is what it is......this is what Mobile Bay and the western Gulf have to offer!  They light up the sky at night with their gas flares, and its quite a sight.


From Dauphin Island we continued west with a short daysail  to Petit Bois Island (pronounced locally as "Pettyboy").  Here, the beaches were a little nicer, and the water a little clearer..  The view to the south was of the Gulf and a few gas structures, but to the north had the appearance of "Gotham City", due to the presence of refineries and shipping facilities in the port of Pascagoula.
But still - it was a pleasant place to be.

From Petit Bois, we headed SW towards the Chandeleur chain.  We had very settled weather.  once we got midway along the chain, we saw a number of "hotel boats" used by fishing guides to accommodate charter fishing trips.  Some were larger boats (50-70 ft) and another was a "pole boat" jacked up on spuds.  The guides use these as a base and take out their clients out on small skiffs......needed to navigate the shallow waters.

We spent a couple of nights here and did some dinghy exploring and fishing.....but unfortunately not much catching.  We are sailors - not fishermen, and we were either in the wrong spot at the wrong time, or had the wrong tackle.....or more likely, both!

So the Chandeleurs are certain beautiful in a remote way.  But I have to say, there's no protection in a blow;
land access is very difficult due to shallow water (even with dinghy), mangroves and few beaches. We took our dog Salty......he wasn't impressed by the one island we accessed which was comprised of broken shells and bird poop........with an alligator pond in the middle.  So after 2 nights - well Salty was ready to leave - and so were we.  We were so glad to have settled weather as this is not the place to be in a blow!.


We headed back along our tracks, but stayed the night at Horn Island.  To me, this was the nicest stop on this trip with very nice beaches, and pretty good water quality.  We stayed at the eastern anchorage marked on Active Captain -
and thoroughly enjoyed the overnight stop.  From there, we went back to Dauphin Island for the night and offshore to Ft. Mcree, near Pensacola Pass.

We enjoyed our trip to the Chandeleurs.  We have meant to do this trip for several years but always favoured heading east.  I am glad we made the trip - the area is beautiful in a remote way....but I think we will continue to favor heading east on future coastal trips!  Horn Island was the nicest stop of the trip to me......I would definitely return there.