Since our cruise, I have been spending some time catching up on boat projects...........you have  probably heard two of the more well known definitions of "BOAT" right? 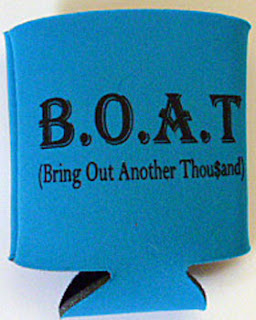 Well I try to minimize the impact by doing most if not all of my own maintenance.  At times I bring in a specialist if i am stumped, just acn't figure it out, or just think its time for an expert.  Here are a couple of examples.

Before heading off on our cruise, I hired a local rigger to come and inspect my standing rigging and make any adjustments needed.  Yes, I could likely do the inspection myself looking for obvious corrosion etc, but since I essentially riggd the boat myself when we recommissioned after transporting the boat to Savannah, I decided that I just wanted another set of eyes, and it was time for an expert.  So I  hired Rick Zurn, a local rigger.  He did a great job, saying everything was basically in good shape, but gave me a list of things to put on the "to do" list - such as replace the halyard in the next few months, service winches, etc  It was well worth his fee for the expert advice and peace of mind.


Front A/C unit - compressor had locked up.  After researching pricing, I decided to simply replace the complete unit 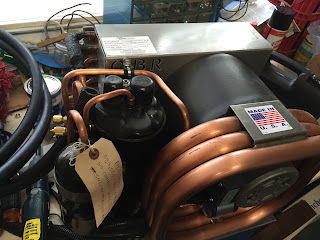 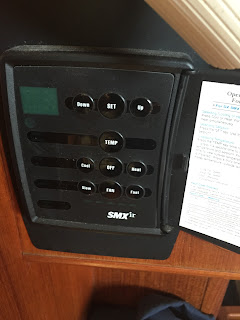 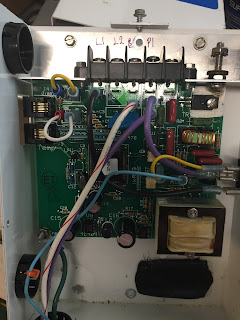 The replacement selected was an Ocean Breeze Unit (16,000 BTU).  the biggest challenge was rewiring the controller so that I could use my existing SMX controler.  I really did not want to have to start modifying cabinetry for a different shape.  Tech support at Ocean Breeze was pretty good, once I managed to get them to understand exactly what I was trying to do.

Another project was the windlass motor - it quit for the second time.  I had replaced the motor a few months ago, and it quit again.  Last time, the motor was worn out - brushes and bearings that nobody could seem to find for me.  But this time it was a brand new motor....hmmmm. So i took the motor our once again, and discovered the motor was dripping with oil.  I took it back to the shop where i had purchased it, and not surprisingly, they confirmed that the motor should not be oil filled.  It had to be the oil seal that had failed on the gearbox above.  If that failed, oil from the gearbox could run into the motor. 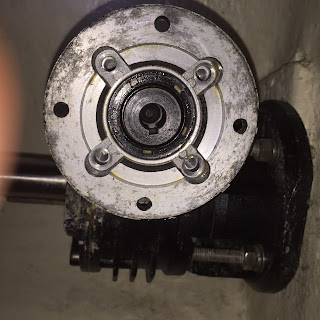 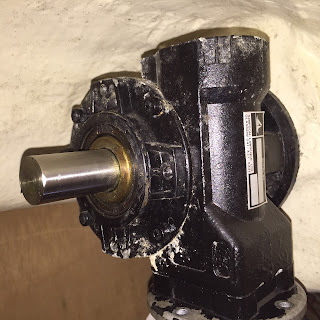 Yes, that was it - the seal had gone bad.  The motor supplier took pity on me.  The motor was essentially ruined, so he sold me a new one at cost.  I found a replacement seal on ebay - yes, the failure of a $5 part ruined a $500 motor..  Interesting thing about the gearbox - there was no apparent way to re-fill or replace the oil.  I contacted the manufacturer - Simpson Lawrence, but they were not much help.  So I filled it with SAE 30 through the bearings before inserting the seal.  It seems to be working fine - fingers crossed!

And finally - the front water tank! Referring back a couple of posts ago, the outlet pipe to the front tank had separated from the tank, likely due to pounding seas and the fact that all the valving was supported on the pipe.  The galvanized tank had a threaded outlet and a brass nipple pipe had come free.  I thought it was going to be a problem, fearing that the threads on the tank may have stripped. Of course i could not get a good view of it, even with my iPhone camera.  And, of course it was way down low with access only for one hand.  Anyway, I cleaned out the threads with a stiff wire bottle brush, used plenty of PTFE tape and thread seal, and the pipe seated well with no apparent leaks.  I reconfigured the valving so no weight was supported by the nipple, so another one off the list!

In among all of this work, we had to make some room for play......so we attended Point Yacht Club's Sailstice event. About a dozen boats gathered at nearby Redfish Point for a weekend of fun, eating drinking, and some sailing.  Hope this little video shows up ok on the blog.

If you like the video, pleasae vote for it after August 13, 2015 at this link http://www.summersailstice.com/harkenvideocontest

Well that's all for this post - hoping to go for a sail today!
Posted by Neil at 8:09 AM No comments: