Back in the Water!

I am pleased to report that Midnight Sun II is now back in the water.  She was launched on Tuesday of this week and the new mast and goodies were lifted into place! A great thanks to the staff at Pensacola Ship Yard for taking care of her.  Midnight Sun II pictured above on the way to be launched after being in the shipyard since November.  While waiting on the new mast, she had a  new bottom job, non-skid surfaces repainted, decks and hull polished and a new cutlass bearing installed, new safety lines........to mention some of the work..  A big thanks to Steve Stack and the staff of Advanced Yachtworks for their hard work! Great job guys!

Zern Rigging raising the mast and starting work setting up the new standing rigging.  Hopefully she will be sailing again soon with new sails being delivered from Schurr Sails next week.  New canvas (bimini, dodger, and full enclosure are being worked on currently by Peaden Marine Canvas.

So we should be sailing by next weekend - fingers crossed!  Or at least very very close.  This will still leave us a fair bit of work to do checking out everything before we set off for Mexico in early May.
Posted by Neil at 9:50 AM No comments:

Back on the Water Soon?

Well, it has been a long process, but progress is being made. And now at a much better rate!  The missing mast parts including the elusive spreaders finally and mysteriously arrived.  After unanswered emails and phone calls to US Spars, one day, they just seemed to show up.

A few other smaller tasks have been done while the boat was out of the water, including changing the cutlass bearing.  It was showing a little play - not bad, but while it was out of the water, it seemed like a good idea to replace it.  I decided to asked Advanced Marine Works to do this for me as they have done a good job on the bottom paint etc., and manager Steve Stack seems like a good guy, and very knowledgeable on most things boat related.  I am glad I asked them to do it as Steve said he could do it in a couple of hours.  It turned out to be "the hardest one he had ever done".  According to Steve, someone at some point had epoxied the bearing in place and filled the set screws with epoxy.  So I know there was a lot of cussing, hammer beating and heat applied........something I decided not to stick around and watch.  Anyway, its done now.  i will go check out the finished work tomorrow.

The mast - well it is being decked out with the goodies and we are hoping that the boat will be splashed  and the mast lifted on Tuesday of next week - fingers crossed! 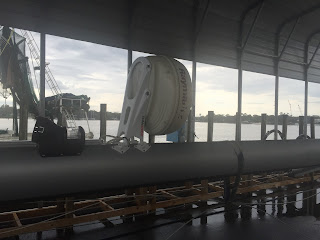 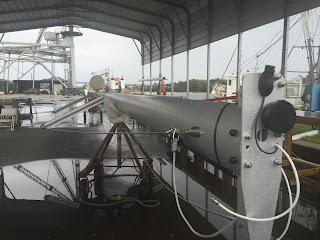 Mast being fitted out with lights, electronics etc.

When is a Mast a Useless Mast?

Well - I guess there are a couple of answers to that:

I can't believe it - a brand new shiny mast, but its useless because US Spars cant't get thier shipping act together.  First they send the mast missing the spreader bars and some fittings......a couple of weeks go by.....then they send what they say is "all the missing parts"......oh but wait, no spreaders........now they say they are on the way and will be delivered next week.

Well I hope so - sorry if this is a rant, but I just don't know how these guys stay in business!  I guess there is just not enough competition in the mast industry and they have a captive customer base!

In the meantime, I have managed to get some sailing in on friend's boats and made it to the PYC raft up at Ft. McCree last weekend. 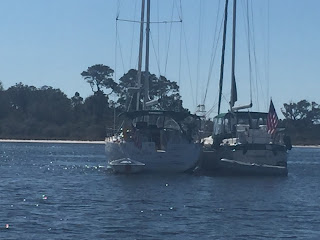 TraSea and Point of Sail 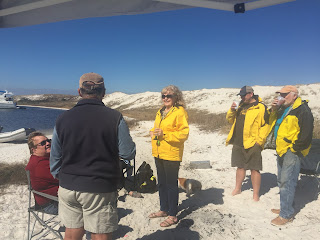 Celebrating the anniversary of Peg's Birthday - she has stopped having birthdays! 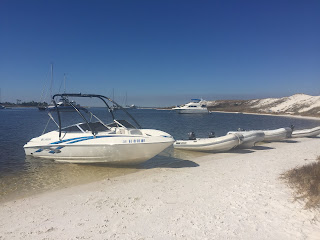