We Have a New Mast!

Our new mast has arrived and as of this post (Jan 28, 2021), is being installed by Zern Rigging of Pensacola.  Once the install is completed and we have se-trialed the boat, I will write a post on the differences and improvements.

Needless to say we are very happy and will soon be back on the water.  We are planning a cruise starting (hopefully) in March.  More info to follow on that.  We have been very busy with repairs since Hurricane Sally.......and the new mast is a significant step forward.

Here are a few photos of the work in progress: 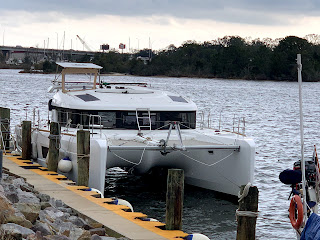 Waiting patiently for the boom truck to lift the mast! 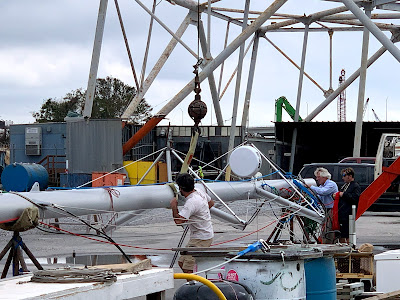 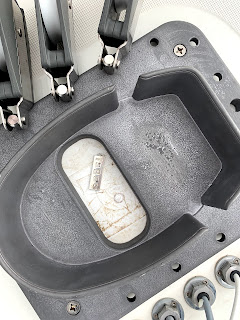 St. Christopher and Silver in place - taking no chances this time.  Note the more robust mast foot.
Mast in place  - now to work on the Standing Rigging 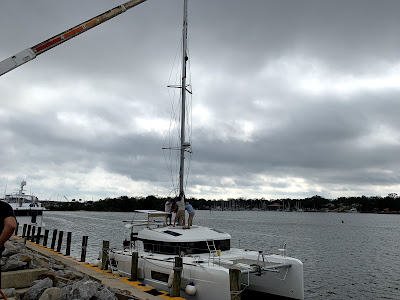 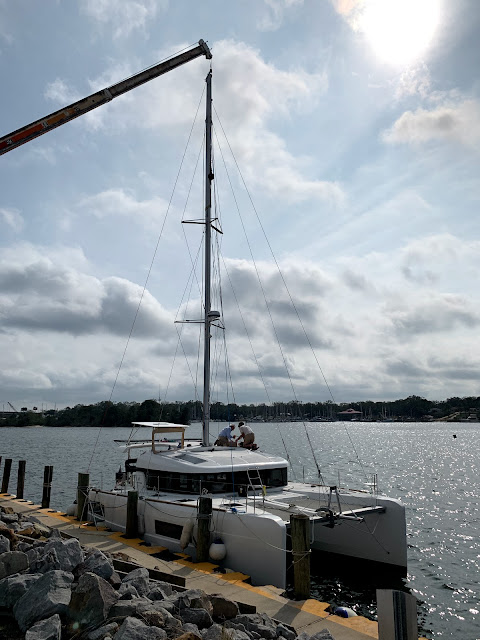 One step closer to getting back to being a Sailboat!

By way of recap - Midnight Sun III was damaged in Hurricane Sally.  The devastation to boats in our area is difficult to comprehend.  So many boats were lost as a result of the unexpected nature of Hurricane Sally.  We were expecting tropical storm conditions at worst, and we actually got a Cat 2 (I think 3) hurricane.  The worst attribute was that it was a slow mover, and we had sustained winds well over 100mph for hours and a high storm surge (I measured close to 9 ft).

If you look back a couple of posts, you will see some photos of our damage.  The major damage to MS3 was the loss of the mast.  Other damage was largely superficial - but the estimate from the boatyard was still substantial.  Notwithstanding that - the boatyards have all been full with wrecked boats etc, and all the repair contractors are booked and cannot give a date as to when they can start.  Its been very frustrating  - so I decided to get moving on the repairs myself and have the boatyard do anything I could not get to.  I'm happy to say that although its been slow.......I am almost there!  THe big thing of course is the mast - and I am pleased to say our new mast......new design has just been delivered to Zern Rigging in Pensacola and it should be installed next week (guessing around January 15 2021).

So in the meantime, I have been grinding out spider cracks around deck hardware.....filling with epoxy and re-gelcoating......

So far, I am pretty pleased with the progress on this.  There's a bit more sanding and polishing needed.  But most of these areas will be drilled out again to mount hardware. 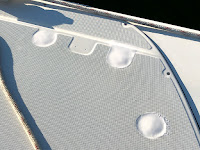 There were also some scratches on the coach-roof, that I have pretty much got out with a light wet sanding.  Once this is complete, I plan to have the topsides professionally detailed, compounded and waxed.  Yes, I could do that my self and may do if I can't find anyone that will do this for me........but I do think there is an art to doing this well.

I have been building a new helm station enclosure.  This time, the new version will have a hard top 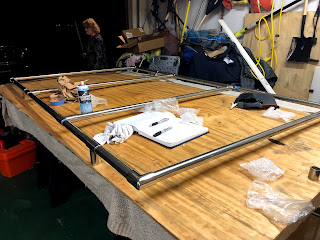 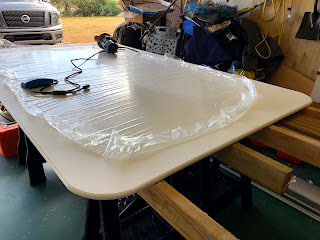 Fabricating a new hard top from 3/4" thick King Starboard XL.  This is pretty heavy material, but it sure beats laying up fiberglass and it seemed to machine pretty well with a router. 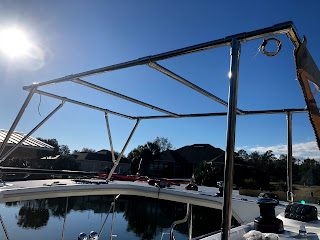 New stainless steel frame installed ready for hardtop.  I also took the opportunity to run some cable in the frame so that I can add lighting. 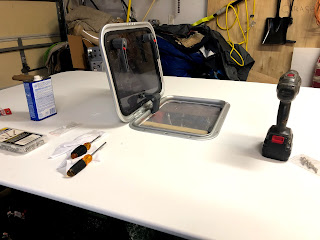 Installing a Lewmar hatch in the hardtop for ventilation and to be able to see the sails when sailing!

The next step is to get this up on top of the boat! 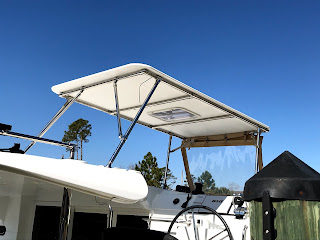 And Viola!  New hardtop on the boat.  I have temporarily attached the old windshield, but we have a new canvas enclosure on order for the hele station and for the entire cockpit area.  We should have that installed by the end of February. 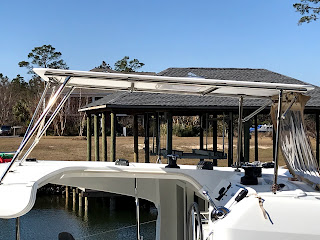 I think this is really going to change the look of the boat  I have installed wiring in the frame so that I can put LED lights in the hardtop.  So there is still some work left to do before this project is complete! 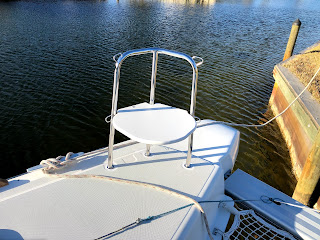 The next step was removing and mounting damaged deck hardware.  This has been fairly easy - there are a few damaged stanchions.  I had to re-bed and tighten a couple of bases, but so far no gel-coat cracks other than the forward pulpit seats that I fixed.  I have just replaced the metalwork for those and fabricated new seats also from Starboard.  I thought the original seats were teak. but they turned out to be  marine ply.  So I figured the Starboard would last longer.  When making the new seats, I made them about 1.5 inches bigger (at the request of the admiral) to accommodate bigger butts! 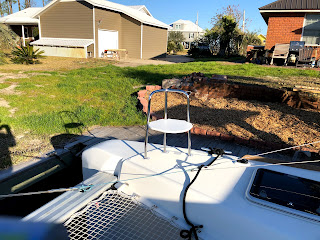 So we are getting very close to being seaworthy again.  Jobs remaining include replacing a piece of toe rail and sealing a leak on a window.  Oh - and of course a new mast!   Which has arrived in Pensacola.  We will be headed to the shipyard next week to have the mast, rigging, and sails installed by Zern Rigging and Schurr Sails.  These guys are the best and I can highly recommend them.  They work very closely together to ensure everything fits.  We have had work done by Zern and Schurr before and they are  both first class!
Anyway - I am going to go ahead and post this and hopefully one more update should see us back on the water as a sailboat rather than a cata-trawler!