Its always amazing to have guests and we loved our time with Cliff, Kristen and Cole.  Now we have the boat to ourselves again.....wow, its so quiet!  We had held up quite a pace trying to pack in as many things as we could while our guests were here.

We spent a little time on  the hook enjoying the activities at Stocking Island.  It is a winderful community of boaters here, but it is easy to get stuck there!  Easy community, things to do, comfortable.  There is absolutely nothing wrong with that.....but many people get stuck in that "comfort zone" I guess.  Some stay for months!  We liked the Monument Anchorage with its nice beaches and walks.  Chat and Chill (bar) was just far enough away that we didn't go every day.....but we could make it by dinghy with just a little effort.
We met some great people, exchanged stories and experiences, and raised a few glasses!

Janet had a trip to make to Vegas to attend a wedding.  I elected to stay with the boat and Salty.  That sure beat two three-leged flights to get from Georgetown to Las Vegas and back on 4 days!  Hats off to Janet for doing it!  So we headed to Emerald Bay Marina where we had easy access to the airport and a good spot for Salty and I to chill for a couple of days.  While Janet was away, Salty and I did make a solo trip to Long Island with Larry and Tracy of SV Tra-Sea.  The weather was great - we ended up motoring across, but having a great sail back, returning to Stocking Island, Georgetown. 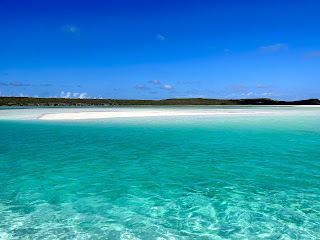 We had a great stay in the beautiful Calabash Bay, and were able to explore the backwaters by dinghy and give Salty and amazing beach walk 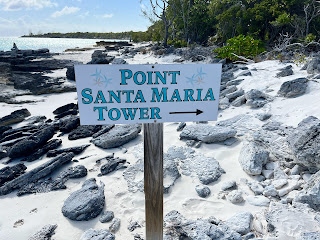 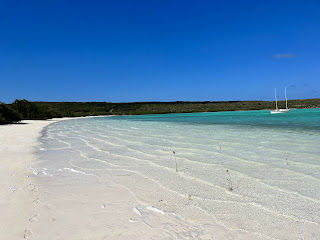 Spectacular waters!, great beaches, and a friendly local resort that actually welcomed cruisers to thier happy hour and restaurant!  This is a spot I would highly recommend and will come back to in the future.  Even though it was a short visit, i really enjoyed our time there.

We had hoped to go down to the Ragged Islands (south) on this trip, but its likely not happening.  Looking ahead at the weather - it was just not working to move south and get back in a reasonable timeframe.  It is now April, and our cruising permit expired May 15, and our insurance company wants us out of the Bahmas by that date too (hurricane risk).  So somewhat reluctantly, we decided it was time to start heading North.

We were at that point in the trip where we knew it was time for us to go separate ways to SV Tra-Sea.  Their plans were taking them south and on to Grenada down the "Thorny Path", but our plans were to head home for the sumer.  It's always sad to separate from our best friends, but it was time.  They had a weather window to head east and on towards the Turks and Caicos - so we wished them well, and we knew this was now time for us to go generally North.

Our first hop took us back to Lee Stocking Island.  Now this is an interesting spot.  An old Marine Research Facility was based here that apparently lost funding about 10+ years ago.  The facility consists of a village; ponds and laboratories where some type of marine studies were undertaken; airstrip; water treatment plant, etc.  it had a very apocalyptic feel to it (I think that's the right word!).  Abandonned, cars and trucks in the street, - everything but the zombies!  While it was interesting - it was kind of weird........especially when I took Salty ashore for his night-time walk!

Back to Black Point for Easter Regatta 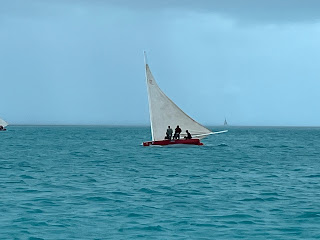 Ok, I did talk about getting stuck in Georgetown/Stocking Island.....and Black Point is another spot where that can happen.....and here we were again!  but its a good place to anchor for a blow, and we did have a minor blow.  But it was also the local's Easter Sailing Regatta.  Wow - how entertaining!  Six local traditional bahamian boats competed....two collided.....one sank (but was recovered).  Well you just had to be there and see the excitement.  Rules?  I think they were "fluid".  Start times - when the boats were ready.....finish line - well even that seemed to move around.  Lots of yelling and wet sailors!  THey even allowed a few tourists to join their crews for a couple of races.  No - I didn't.  I was tempted.  Fear of the recovery time from injury got the better of me.  Maybe that was good sense!....I am not as young as I sometimes like to think I am. 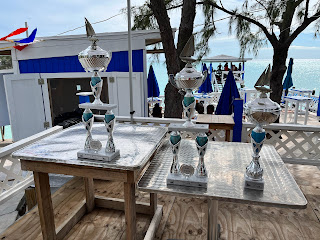 Made Some North Progress

We left Balck Point with no firm plan on destination.  We were thinking of maybe Cambridge Cay about 10 miles north......but what perfect conditions we had!  Wind on our tail at about 120 degrees and about 18 kts with a near flat sea.....we had to go further.  Even with a late start we made about 45 miles to Norman Cay which put us quite far north in the Exumas.

I had been watching the weather as I normally do.  A trough and low pressure system was rolling off the US coast pushing strong NE veering E winds down to the Bahamas.  Not dangerously strong....but perhaps enough to make conditions uncomfortable, and the outlook was similar for about a week.  Where would be a good spot to hang out?  The Northern Exumas were Ok, but not great, so we elected to make a relatively big push the next day and go to Spanish Wells.  We sailed, we motor-sailed, then motored a bit.  Went through a couple of localized squalls - but nothing bad.  We made it to Spanish Wells in good time and secured a dock in town.  It looked like we would be here several days to a week - so its nice to be at a dock where you can get off the boat comfortably and have the piece of mind of being securely tied up and sheltered!!
Posted by Neil at 3:33 PM