The Exumas and Black Point Festivities 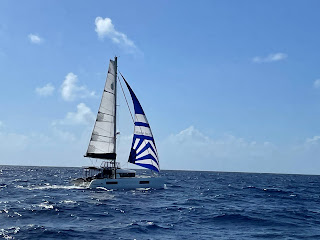 We arrived in the Exumas after a glorious sail from Cape Eleuthera to Waderick Wells. Conditions were great with 15-18 on the beam and 2-4 ft swells.  Leaving Davis Harbor on Eleuthera was a little tense as its narrow, and shallow.....and of course we hit it at low tide!  But all was good. 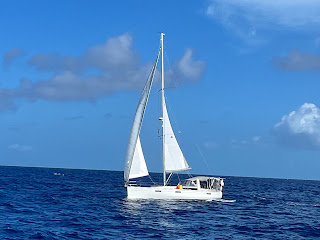 We spent a couple of nights at Waderick wells - the first night at Emerald Rock and the second in the North Field.  We love Waderick Wells and saw plenty of beautiful vistas and wildlife - with 2 Bull Sharks swimming under the boat all night.
We love the trek up to BooBoo Hill where we placed the obligatory boat memorabilia

We took advantage of a cold front blow to move south and sailed from Waderick to Black Point in 25 kt winds, finding a pretty good spot at Black Point.

For several months, I have been promoting an SSCA "Informal Gathering" at Black Point on March 15.  There had been a lot of interest on the SSCA Forum, but who could know how many boats might actually show!  I had also been in contact with Lorraine Rolle of Lorraine's Bakery and Cafe at Black Point.  Lorraine is the SSCA Cruising Station Host for Black Point and the southern Bahamas.  Well!  Lorraine had gone to town and organized a whole host of events!  What a great time was had by all.  I have included some photos below. 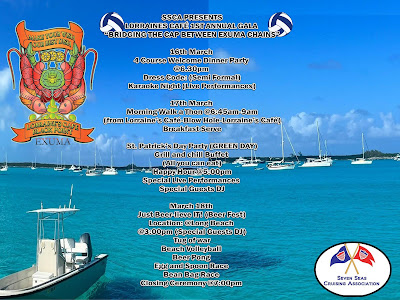 Lorraine put on a welcome reception on the 15th with free appetizers; a 4-course semi-formal dinner (we took that to mean shirt with no oil stains!); walk-a-thon; St. Patrick's Day Buffet; and a BBQ on the beach.  Each night there was live entertainment with a DJ, local performers, and a Rake and Scrape Band that she brought in from Nassau (Curbside Rockers).  The band was excellent and very entertaining!  When I get around to making a video of this trip, I will have some footage of their performance. 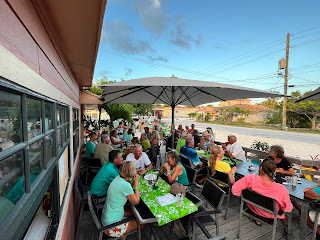 There was a great turnout from SSCA and many others.  I don't have an accurate headcount of SSCA members, but my guess is that over 20 SSCA boats came through with some staying for all events.  The events were open to everyone.  We asked that SSCA members bring along school supplies if possible to donate to the local school - and many did so!

I did a boat count in the anchorage and we consistently had over 60 boats each day of the event, with some turnover each day.
The closing night was once again another great night with live performances from the band, DJ and a well-known Bahamian rapper that the kids all seemed to know!
The kids - locals and cruisers played volleyball on the beach, and there was a tug-of-war contest for cruisers.  Sadly our team SV Tra-Sea was defeated - but is was a lot of fun!


Based on the success of this years' event, Lorraine plans to make this an annual event.  I hope so - it was so great to see cruisers back in the Bahamas having fun again!  I am pretty sure the event was a success for local businesses - especially Lorraine's Cafe.
Thank you Lorraine!
Posted by Neil at 6:21 AM